Alleged Chemical Attack in Syria Puts the World on Edge 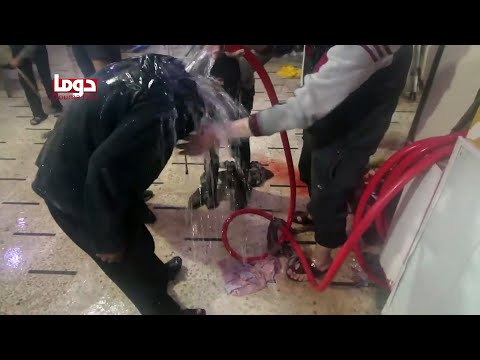 An alleged chemical attack on 7 April 2018 killed at least 42 people and injured more than a 1,000 in Douma, a town in the rebel-held enclave of Eastern Ghouta, outside Damascus. The international community responded immediately, accusing the Syrian regime of carrying out the attack. A week later, a coalition made up of the United States (US), United Kingdom (UK) and France launched an air strike, allegedly targeting chemical weapons plants in the country.

It is unknown if the strike was a success. The coalition claims it was whereas Russia said it had intercepted 71 of the 100 missiles reportedly launched.

The alleged attack came almost exactly a year after the Khan Sheikhoun chemical attack on 4 April 2017, whose effects looked exactly like this one. According to medical sources, “The victims’ symptoms resemble that of sarin gas exposure such as difficulty breathing, vomiting and foaming from the nose and mouth. Chlorine attacks are not this deadly.”

The Organization for the Prohibition of Chemical Weapons (OPCW), the implementing body of the  Chemical Weapons Convention (CWC), set up its own independent fact-finding mission for Syria in 2014. It has investigated more than 70 cases of alleged toxic gas attacks in Syria since then. It is now investigating the Douma case, and has confirmed the use of a toxic gas. US officials said on 12 April that urine tests from Douma have tested positive for chlorine and a nerve agent.

Douma has been a regular target of regime attacks for five years but has been under increased assault since March 2018. The attacks allowed President Bashar al-Assad to take Douma after the residents and rebels fled in buses to Jarablus, a town near the Turkish border that is controlled by Ankara-backed rebel fighters. A paramedic told the Guardian newspaper, “I am leaving tomorrow, God willing, because our mission has ended. I am saying thank God that the mass killings are over, but I am saddened that I will leave my land and my people, possibly never to return. But I will leave knowing that I gave everything I could until the end.”

In a statement, the European External Action Service (EEAS) said, ‘We call on the supporters of the regime, Russia and Iran, to use their influence to prevent any further attack and ensure a cessation of hostilities.’

French President Emmanuel Macron said on 12 April 2018 that France would decide to strike when all the necessary information was gathered. “We have proof that last week, now 10 days ago, chemical weapons were used, at least with chlorine, and that they were used by the regime of Bashar al-Assad,” Macron said, after it became known that France was coordinating with the US on a possible military response. He had already declared, as former US President Barack Obama had done, that chemical weapons were a “red line” but has done nothing since the beginning of his presidency to put an end to it. The same day, UK Prime Minister Theresa May called an emergency cabinet meeting to discuss the possibility of joining France and the US in a military strike. According to The Telegraph, British submarines were ordered within missile range of Syria.

Yet it was the US that reacted most forcefully. On 9 April 2018, President Donald Trump condemned the attack, saying he would decide in 24 to 48 hours if he was going to launch a reprisal offensive on Syria. In a tweet, he denounced the ‘mindless CHEMICAL attack’ in Syria that killed women and children, called Bashar al-Assad an ‘animal’ and criticized Russian President Vladimir Putin for supporting the Syrian government. Asked by a reporter if Putin had any responsibility for the attack, Trump replied: “He may, yeah, he may. And if he does, it’s going to be very tough, very tough. Everybody’s gonna pay a price. He will, everybody will.”

In a subsequent tweet, Trump said, ambiguously, that an attack in Syria ‘could be very soon or not so soon at all’. Just days after the Khan Sheikhoun attack last year, the US launched a cruise missile attack on a Syrian airfield, although it had no long-term consequence on the war.

In the wake of these announcements, Eurocontrol, the pan-European air traffic control agency warned airlines to exercise caution in the eastern Mediterranean due to the possible launch of air strikes into Syria in next 72 hours. Kuwait Airlines exercised extreme caution, cancelling all its flights to Lebanon. An attack on 9 April 2018, apparently by Israel, that killed 14 Iranian military personnel on a Syrian base added to regional tensions, although it later became clear that this attack was not connected to the events in Douma.

The situation continues to be volatile, leaving the world and especially Syria and its neighbours on edge, fearing for the last scraps of stability they have. Once again, the recent air strike by the US, UK and France has had few tangible results, and many suggest they should have focused their efforts on trying to overthrow the regime instead.