Iran After US Withdrawal from the Nuclear Deal: Managing the Repercussions 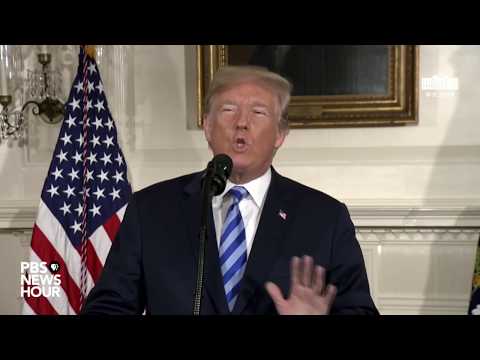 On 8 May 2018, President Donald Trump announced the US’ withdrawal from the Joint Comprehensive Plan of Action (JCPOA), fulfilling one of his campaign pledges. He also signed a bill to reimpose sanctions on Iran previously lifted as part of the nuclear deal. The E3 (Britain, France and Germany) have stated their commitment to the deal and encouraged Iran to stick to its own commitments, vowing to keep the deal’s dividends alive for Tehran. Despite these developments, the JCPOA remains a part of Iran’s internal politics and will shape many of its developments in the months and years to come. So, what exactly does the US withdrawal mean for Iran and how will it affect Tehran’s political sphere.

Trump’s decision has been interpreted in two ways. The first is that he is simply undoing one of Obama’s main foreign policy achievements  and, therefore, is ultimately aiming for a grand bargain with Iran. The second assumes that Trump and his inner circle are obsessed with Iran and are aiming for regime change. Both, however, agree that the Trump administration is demonizing Iran as a way to pressurize its economy and affect its political and social debates and developments. Therefore, irrespective of the consequences of Trump’s decision and the way it is interpreted in Tehran, hostility towards Iran is believed to be gaining ground in Washington – as stated by both Iran’s Supreme Leader Ali Khamenei and President Hassan Rouhani. The consequences of the new US policy toward Tehran can be divided into three main areas.

Firstly, the US withdrawal will likely derail Rouhani’s policies and weaken his domestic efforts. While Khamenei has stated time and again that the US is not trustworthy, it is now the moderates who are shouldering the blame for ‘trusting the Americans’. In other words, the blame game is hurting the moderates more than at any point in the past five years. To compensate, the moderates will have to adopt a more hardline approach or start assigning blame themselves. Rouhani and Foreign Minister Mohammad Zarif’s rhetoric after the withdrawal speech suggest that a hardline approach might already have been chosen.

But bringing up the fact that Khamenei was well aware and hence responsible for the deal, and that it was not only the moderates’ option by a credible figure such as Natiq Nouri, points to another option. In any case, the moderates are weaker that before the US withdrawal. And the question is now whether they will further weaken the system or maintain the status quo.

For the hardliners, however, Trump’s decision has played into their hands. Sticking to the deal without allowing the dividends to fall on Tehran could have kept the Rouhani administration’s reputation above water. But withdrawing has cleared the way for an all-out political and media campaign against Rouhani and other moderates. Already under huge pressure, Rouhani is tasked with defending Iran’s rights in its negotiations with the E3, based on Khamenei’s rule book outlined in his Ramadan meeting with Iranian officials. With Trump’s withdrawal, Khamenei is directing the political scene in Iran and is having Rouhani’s team do what he deems necessary, without facing any challenge.

Secondly, inflation of up to 40 per cent, a high rate of unemployment and endemic corruption as well as sanctions that reduced Iran’s share of the global oil market, leading to Rouhani’s election in the first place and the nuclear deal soon after. Although corruption and mismanagement have played a key role in the country’s economic woes, the sanctions imposed in 2011 have had a material and psychological effect. The currency plummeted and other economic indicators worsened.

It remains to be seen how the new round of economic sanctions will effect Iran’s economy. Still, the psychological effect has been felt both internally – harming economic stability – and externally – deterring foreign firms – and has already done a lot to hurt Iran’s moderates’ reputation and credibility and to undermine their internal agenda.

Thirdly, on the social level, which seems to be the Trump administration’s best bet to bring Tehran to its knees, analysts suggest that anti-US rhetoric is on the rise, and it is expected that public sentiment will move towards two extremes: increasing nationalism fuelled by the growing possibility of war, or an uprising by the poor. The first could come as a result of an elite consensus on the need to move beyond differences to face the challenge on the one hand and the middle and religious classes’ support of the official policy in the face of a hostile US administration on the other – both appear to be working for now.

Iran hawks in Washington seem to support the demonstrations that occurred in various cities throughout Iran in December 2017/January 2018. Irrespective of the causes, according to many analysts, those demonstrations were far from middle class ones. They had two other features: they were leaderless and limited in size. Although Iran’s opposition groups, especially the controversial left-wing MEK, suggest that increased economic pressure could lead to an uprising that could topple the regime, history shows that only a strong turnout by the middle class will pose a threat to the ruling elites.

For now, the ruling elites are capitalizing on the public resentment towards the US for reneging on its commitments in the JCPOA. However, the future appears less rosy. Firstly, Tehran will have to cope with the impact of Trump’s policies on the already faltering economy. Secondly, keeping the consensus of the ruling elites in dealing with the US will be crucial for facing off US pressure in the new phase. Thirdly, Tehran will probably be faced with more social unrest, which, if the middle class mobilizes, could be a game changer in Iran.