Russia Pushes for End to Conflict in Syria, Stands to Win Big from Political Settlement

Russian intervention in Syria from 2015 was definitive in turning the tide of the war in favour of the regime. Three years later, as Russia ostensibly begins to wind down its military presence in the country, the Kremlin is continuing to hold the political cards. At the same time, Russia’s aims are increasingly at odds with its allies in the conflict.

Russia is convening its own peace talks in Sochi in late January 2018 – separate from the United Nations-sponsored talks in Geneva – between the Syrian regime and opposition groups, along with Iran, which also supports the regime, and Turkey, which backs the opposition. Many rebel and opposition groups have rejected the Russian-brokered talks because Moscow will not pressure Syrian President Bashar al-Assad to step down.

But the UN talks have also made little progress. Meanwhile, after the separate Astana talks in the autumn of 2017, Russia, Turkey and Iran agreed to four ‘de-escalation zones’ in Syria, with mixed results. Amid a renewed offensive by the Syrian army in rebel-held Idlib, Turkey recently summoned the ambassadors of Russia and Iran and accused the Syrian regime of violating the Astana agreement through its offensive, and Russia and Iran of failing to exert pressure to stop it. Turkey considers itself the guarantor of moderate opposition groups in Syria, but beyond that, it is worried that continued fighting in Idlib will lead to another flood of refugees across the Turkish border.

Russia, in turn, complained to Turkey about drone attacks on Russian military bases in Syria, saying that the drones had been launched from an area controlled by Turkish-backed rebels.

The widespread perception that Russia is calling the shots is shared by rebel groups inside Syria. In the besieged Damascus suburb of East Ghouta, rebels are negotiating directly with Russia rather than with Russia’s protégé, the Syrian regime. “It’s better to negotiate with the one calling the shots, which is Russia, than with the regime,” Wael Olwan, spokesman for the Failaq al-Rahman insurgents, told Reuters. “So the factions are forced to sit down with them. This is the reality.”

But what Russia wants and what the regime wants in the long run may not be the same. Although Russia intervened to save al-Assad from being toppled, the Russians are now eager to see a political settlement to the civil war that will allow them to wind down their military involvement.

On 11 December 2017, Russian President Vladimir Putin declared the war in Syria to be effectively over and said Russia would begin withdrawing its troops, although permanent Russian bases will remain in the coastal cities of Latakia and Tartus. He said the time was ripe for a political settlement, which the Russians hope will be reached during the Sochi talks.

In part, the Sochi talks appear timed to come just ahead of the Russian presidential election in March 2018. Although Putin’s re-election seems to be a foregone conclusion, he wants the turnout to be high and his victory unequivocal. 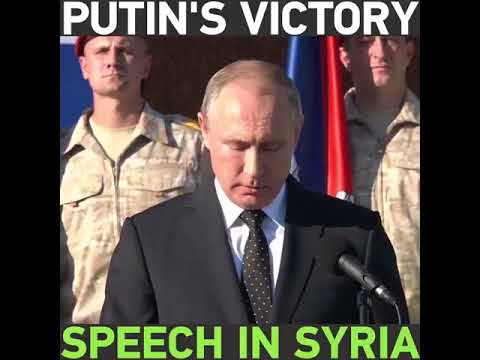 A political settlement that would allow him to declare the war in Syria to be definitively over would help his popularity at home. However, the Russian vision of a political settlement may not align with al-Assad’s goals. Dmitri Trenin, director of the Carnegie Moscow Center, wrote that Russia ‘understands that restoring [al-Assad’s] control over all of Syria is impossible and even undesirable, since other groups, from the Sunni opposition to the Kurds, adamantly reject this outcome’. The Russians, he said, believe a ‘communal power-sharing arrangement akin to Lebanon’s could be a recipe for stability’ in Syria. This might involve a coalition government that would include opposition groups, for instance.

But al-Assad, as evidenced by the Idlib offensive, is still aiming for a military defeat of the remaining rebel groups and to bring most, if not all, Syrian territory back under his control. The regime has so far been unwilling to accept the idea of a decentralized government with power shared among different political, ethnic and religious groups.

There are also other issues that could derail the peace process. An analysis of foreign policy priorities facing Russia in 2018 by the Russian International Affairs Council, a Moscow-based think tank, listed among the potential challenges ‘disruption or stagnation of the peace process as a result of contradictions both within Syria and among external players (disagreements between Russia and the United States, Turkey’s stance on the Kurdish issue, the question of Iran’s influence in the region)’.

In terms of Iranian influence, the Russian news agency Sputnik reported last summer that rifts had emerged between the Russians and Iranians over the future of Syria, saying that Russia envisions Syria as a secular state with equal rights for the various religious groups, while Iran wants to ‘impose its will on Damascus and establish a political and ideological basis for further expansion of Shiite influence in the region’.

Likewise, the most obvious point of contention between Russia and Turkey is the degree of autonomy that will be accorded to Kurdish areas. A Russian-proposed draft constitution aimed to give the Kurds greater autonomy in the form of a more decentralized government. But Turkey considers the Kurds to be a threat – and has designated the Kurdish-led YPG, which was a key player in the fight against the Islamic State, a terrorist group.

Whatever the potential political minefields, Russia is banking on the fact that it will have a leading role in – and benefit from – the reconstruction efforts in Syria. The International Affairs Council listed as one of the key opportunities for Russia in 2018 ‘rebuilding Syria in conjunction with leading international organizations and associations’.

Certainly, Russia will not be the only international player vying for a piece of the reconstruction effort. Russia itself does not have the funds to pay for the rebuilding, estimated by the UN to cost at least $250 billion. Russia has been pushing the United States and Europe to pay up, but Western governments have been reluctant because of their ostensible dislike of al-Assad. Still, in the end, they will almost certainly contribute, and Western companies will also benefit from reconstruction contracts. China, too, is likely to step in to finance the rebuilding. However, due to its role in the conflict to date, as long as al-Assad remains in power, Russia has assured itself a place at the table.