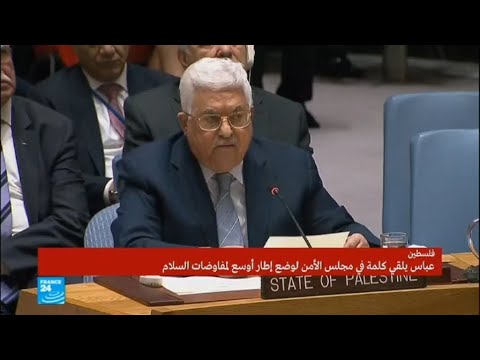 President Donald Trump’s declaration in December 2017 that the United States (US) will recognize Jerusalem as the capital of Israel and that it will move its embassy from Tel Aviv to the holy city was only the tip of the iceberg for Abbas. What brought Abbas to the brink was the international community’s—especially the Arab and Muslim parts of it—reaction.

To the casual onlooker, the international community seemed to speak with nearly one voice – the United Nations Security Council voted 14-1 and the UN General Assembly voted 128-9 – in denouncing Trump’s declaration and supporting the long-standing international consensus on Jerusalem’s status. However, closer observation reveals that the two UN votes only added to the fanfare of grand statements on the issue, with little to correct the path for-ward.

The UN General Assembly resolution text submitted by Turkey and Yemen did not mention the US by name but rather expressed ‘deep regret at recent decisions concerning the status of Jerusalem’. This omission was premeditated and is significant; it shrewdly defanged any ability for the resolution to serve as a platform for further action to be taken. The Palestinian side was told loudly and clearly to accept the watered-down version of the resolution or risk the support, albeit moral, of many of its key allies. The Palestinian leadership, in a posture all too familiar, accepted what it could without losing face on this key issue of Jerusalem’s status.

Despite the intense emotions the issue evokes, the Palestinian leadership’s continued tiptoeing around the international grandstanding, while largely accepting a deteriorating political and humanitarian reality, has not gone unnoticed in Palestine.

Abbas’ immediate promise to hold a meeting of the Palestinian leadership to craft a response to Trump’s declaration fell far short of what the fatigued Palestinian people were expecting. Even then, Palestinians waited patiently for the security forces to appear as a handful of frustrated youths charged Israeli checkpoints across Gaza and the West Bank, leaving more than 20 Palestinians dead and hundreds injured.

Finally, on 14 January 2018, Abbas convened the Central Council of the PLO in Ramallah. In a long, drawn-out speech to 87 of the 109 members who attended the session, Abbas scolded Trump and then went on to give the audience lessons in religion and the conflict’s history. These lessons have become common features of Abbas’ speeches, whether they are in Ramallah or at the United Nations.

Noticeably absent was any reference to how these Central Council members had become and remained members. Additionally, no one questioned why the meeting was held in Ramallah, which prevented several people and political groups, notably Fatah’s main rival Hamas, from attending. Instead, the audience, with a live TV broadcast, cheered and applauded as Abbas bragged about Ramallah’s beauty.

Sam Bahour, a policy advisor for al-Shabaka, the Palestinian Policy Network and secretariat member of the Palestine Strategy Group, noted that “the responsibility for the unravelling of the Palestinian national liberation movement cannot be placed solely on the shoulders of Mahmoud Abbas, or even Fatah … Abbas has been permitted to have a free hand by every single Palestinian political party, not to mention Palestinian society at large – from Rafah to Ramallah, from Safad to the Sabra Refugee Camp in Lebanon, and from the Marka Camp in Amman to Massachusetts.”

The Central Council concluded its Ramallah meeting with a final statement that underlined the transitional period stipulated in the agreements signed in Oslo, Cairo and Washington, with its obligations no longer stand. But as the Palestinians have come to expect, the Council then moved to pass the responsibility to act on the meeting’s resolutions to the PLO Executive Committee, which is also likely to do nothing, as was the case in previous resolutions such as terminating security cooperation between the PA and Israel, which continues to this day.

Another resolution stated ‘that the US administration, by announcing this decision, has lost its eligibility to function as a mediator and sponsor of the peace process and will not be a partner in this process unless the decision is reversed’. This is fighting talk. But a month later it remains only talk, as the gossip in elite circles hints at secret negotiations underway regarding Trump’s promised ‘deal of the century’, which aims to bring an end to the nearly 70-year Palestinian-Israeli conflict.

Ziad F. Barghouti, a well-known Palestinian businessman, bluntly proclaimed in a February Facebook post, titled ‘What we don’t hear from the president’, that Abbas is repeating ad infinitum ‘the Zionist project, the American conspiracy, the Arab abandonment and the Palestinian division’ but has ignored ‘why the Americans, the West, the Israelis and the Arabs dared at this time to exploit our rights, our history, our sanctities and our Jerusalem’.

In an attempt to reassure Abbas, should he choose finally to act, Barghouti went on, ‘Your children [people] will not let you down and they will not say to you: Go, you and your Lord. They are waiting for you to put the Palestinian house in order.’

This idea of appealing to the president to take real action is not new. On 20 July 2013, leading Palestinian lawyer Haytham al-Zubi published an opinion piece in al-Quds newspaper, titled ‘Calm constitutional advice to the Palestinian president’. Here too, a Palestinian citizen provided free advice to Abbas, this time regarding the desperate need for the president to appoint a deputy in order to ensure the continued legitimacy of the leadership, especially given the inoperative Palestinian Legislative Council.

No deputy has been appointed to date, which is hardly surprising. What is remarkable is that despite all their despair and frustration, the Palestinian people continue to pin their hopes on an 82-year-old named Mahmoud Abbas.