Turkey After the Coup Attempt, Now the Isolation? 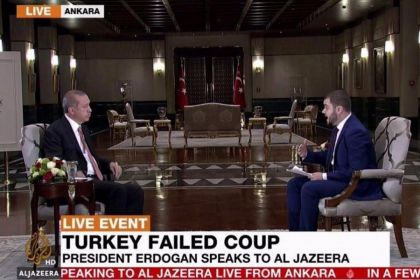 Five days after the coup attempt that shook Turkey on 15 July 2016, most of the world’s powers have condemned the event. However, many were slow in coming forward and their condemnation, when it did come, was often half-hearted, indicating the growing political isolation of President Recep Tayyip Erdogan.

On Friday night, in the first two hours of the attempted coup, it was hard to know in which direction things were evolving. Erdogan and his government were nowhere to be found, and mutinying army units backed by F-16s and combat helicopters were advancing almost unchallenged on Istanbul. When the president finally appeared, it was via the FaceTime app of a CNN Turk journalist’s iPhone on live TV: he seemed alone and weak.

Moreover, the first reactions were confusing. Statements from Europe and America described a ‘major event’, called for the return of peace, and warned citizens to be careful. Yet there was no clear denouncement of the obvious military coup taking place. The US government’s initial reaction, for instance, referred to an uprising, not a putsch, and avoided any condemnation.

Egyptian media supportive of President el-Sisi’s authoritarian regime, which in turn is opposed to Erdogan’s government, were openly rooting for the coup’s success, to the extent that Saturday’s newspapers carried headlines such as ‘Erdogan has fled the country’ and ‘The army has taken over in Ankara’. Egypt even blocked a statement in the UN Security Council condemning the coup attempt, a move that was later sharply criticized by the Turkish Foreign Ministry.

Meanwhile, news network al-Jazeera, which has close ties to the Qatari royal family, long-time supporters of the Muslim Brotherhood, covered the events with caution and made it clear it did not support a military coup. A similar stance was evident in major online newspapers such as The Huffington Post Arabi and Arabi 21, which also stay close to the official Qatari line.

The first clear condemnation of the unfolding events came from Qatar, whose ties to Turkey are no secret. Qatar hosts Turkey’s only foreign military base. Qatar’s royal family and Erdogan’s Justice and Development Party (AKP) have also been allies in their handling of the Arab Spring and have presented a united front in opposing the anti-Muslim Brotherhood policies of the UAE and Saudi Arabia, at least before Saudi’s King Salman ascended the throne in January 2015.

Later on Friday night, the Moroccan government, whose prime minister leads an Islamist party and is thus sympathetic to the AKP, confirmed that Morocco stands with Turkey’s democratic institutions. Morocco, furthermore, is no stranger to similar attempts by the military to seize power.

Singularly, Tunisia, whose governing coalition includes Islamists, refrained from commenting until Saturday afternoon. The parties which were in power in Tunisia between 2012 and 2014 (the Islamist Ennahda and secular al-Irada), however, were quick to condemn the attempted coup and show support for Erdogan.

Tunisia was, between 2012 and 2014, seen as a satellite of the Turkish-Qatari alliance and it has received hundreds of millions of dollars in aid and loans from Erdogan’s government. However, its relationship with Turkey was damaged after the 2014 election, won by the secular Nidaa Tounes party, and comments made in 2015 by its foreign minister, who accused Turkey of fostering terrorism.

unexpected support came from Iran, a country at odds with Turkey over Iraq and Syria, initially through Twitter on Friday night and later through official statements issued by the foreign minister and president.

Russia, whose jet downed by Turkish fire in Syria in 2015 put the two countries at loggerheads, stopped short of denouncing the coup attempt. “Moscow hopes that however events in Turkey develop, whoever initiated what’s happened, the security of Russian citizens will be protected,” its statement read. Although Erdogan fired his interventionist prime minister Ahmet Davutoglu and asked the new prime minister Binali Yildirim to normalize relations with Moscow in late June 2016, the two countries are still on less than friendly terms.

That same night, the United Nations and NATO, both organizations of which Turkey is an important member, called for calm and stability but voiced no further opinion. It was after midnight before Germany issued the first clear message from the West, urging respect for Turkey’s democratic institutions. Federica Mogherini, responsible for EU foreign and security affairs, followed. It was only then that the US, the EU, and others offered their full support to ‘Turkey’s democracy’. Saudi Arabia waited until the next day, when Erdogan was evidently back in control, to offer its support. Israel, with which Erdogan reconciled in June 2016 after a six-year row over Israel’s raid on a Gaza-bound flotilla in 2010 that killed nine Turkish activists, took 15 hours to confirm that it ‘respects the democratic process in Turkey’. By then, it was obvious that the coup had failed.

During this time, phone calls between world leaders and the Turkish leadership were limited, as were official visits to Turkey and Turkish embassies. In contrast with the cautious reactions that accompanied the coup attempt between Friday and Saturday, the response to Erdogan’s subsequent ’countercoup’ was harsher and more to the point. As the purge began and the Turkish leadership threatened to restore the death penalty amid mob violence, Europeans and Americans openly criticized Erdogan’s actions and warned they could jeopardize Turkey’s application for membership in the EU. Similar comments about Turkey’s membership in NATO were heard.

The sluggish and lukewarm response from the international community to the attempted coup, and the salvo of criticism that followed the widespread crackdown, made the president and his followers deeply suspicious of a potential global conspiracy against his regime. As tens of thousands of people are fired from Turkey’s public institutions, the country seems more isolated than ever.