Can UNRWA Withstand Another Blow?

The UN Relief and Works Agency for Palestine Refugees in the Near East (UNRWA), the UN agency that provides essential services and relief to displaced Palestinians, has been hit by yet another public blow after several countries suspended funding following a media-exposed ‘scandal.’ In 2018, the US already massively reduced its funding of the UN body, then cut it to zero in the 2019 budget. Dogged by controversy in the past, the UNRWA is now in real danger. Its critics believe it should be shut down, while others says censure of the refugee body is political. Lost funding can potentially hinder fundamental services for the millions of Palestinians who rely on it. It is prompting the question of whether UNRWA can harbour another blow.

Belgium was the third country in summer 2019 to suspend funding to the UN Relief and Works Agency for Palestine Refugees in the Near East, often referred to by its acronym UNRWA. The decision came after a leaked ethics report accused senior leadership within the agency of misconduct and abuse of power.

Belgium’s Minister of Development called the allegations “unacceptable” if true, and followed Switzerland and the Netherlands’‘ independent decision to withhold resources until an ongoing investigation has been concluded, findings have been released and measures decided upon.

Contents of the report were leaked to Al Jazeera, from which the Doha-based media organisation published extracts in July.

They included allegations of “misconduct, nepotism, retaliation, discrimination and other abuses of authority, for personal gain, to suppress legitimate dissent, and to otherwise achieve their personal objectives,” and was focused on a small group among senior UNRWA leadership that was referred to as an “inner-circle.”

The report claimed that since the US’ decision to defund the agency in 2018, decision-making power has consolidated among this inner-circle and has led to an escalation in “management decline” and “a significant breakdown of the regular accountability structure.” Allegations include the charge of inappropriate relationships having developed, that led to senior appointments via opaque processes, as well as excessive travel.

The 10-page confidential report, leaked from the agency’s ethics office, also concluded that certain individuals pose “an enormous risk to the reputation of the UN” and that “their immediate removal should be carefully considered.”

Commissioner-General Pierre Krähenbühl, at the center of allegations, has rejected the characterisation of UNRWA and its leadership in the report ,although no further comments can be made on the reports’ contents until the investigation has concluded.

UNRWA was set up in 1949 after more than 700,000 Palestinians were uprooted as a result of the establishment of Israel in 1948. Its services include schooling, health facilities, safety nets, infrastructure as well as micro-financing and emergency response. It currently provides help to 5.4 million Palestinians refugees in the occupied Palestinian territories, Lebanon, Jordan and Syria. While it began with a temporary mandate to aid and shelter exiled Palestinian refugees until there is a “just resolution of the question of the Palestine refugees,” it has since then been continually renewed by the UN General Assembly as no just resolution has yet been found. Its current mandate will expire in June 2020.

Throughout its operation, critics have argued that UNRWA should be dismantled. One reason they often cite is that the UN has another refugee agency, the UNHCR. Another reason is more political.

“The organization’s decades of existence is a Palestinian political achievement, reflecting an international consensus that Palestinian refugees are in a different category than other refugees,” said Hady Amr, a Middle East policy analyst who served as deputy special envoy for Israeli-Palestinian negotiations under Secretary of State John Kerry, speaking to Fanack Chronicle.

The existence of the body is often equivocated with the principle of the “right of return,” which others argue would exist with or without UNRWA’s existence, and which dictates that everyone has an inviolable right to return to their homeland. It is the subject of UN resolution 194.

However, when the US administration, under President Donald Trump, cut its funding to UNRWA in 2018, it was interpreted as a blunt move to try to eliminate the issue of return from the negotiating table.

Amr continues: “There are elements of far-right Israelis from Netanyahu and further to the right, who love to complain about UNWRA and criticise it.” But as with any large bureaucratic organisation, the agency will always have its problems, he says.

Yet allegations of the nature revealed by the leaked report have not surfaced before and an assessment by the Multilateral Organisation Performance Network has described UNRWA as a “well-managed organisation that delivers.”

Nevertheless, UNRWA has endured its share of controversy. This includes the use of its premises to store and launch rockets by Hamas during the 2014 war in Gaza, which UNRWA distanced itself from.

As the US was the agency’s biggest donor, contributing a third of its entire budget, the suspension of this aid caused a funding crisis last year. Other donors helped to bridge the gap left by America’s deficit, but the shortfall in UNRWA’s funding remains at $161 million for the year, out of a total budget requirement of $1.2 billion, according to Tamara Al-Rifai, the UNRWA spokesperson.

Dr. Anne Irfan, a historian from the London School of Economics who researches UNRWA, says more non-Western states are now supporting the agency, including Russia and Japan. “Most interestingly,” says Irfan, “Gulf Arab states have increasingly provided funding to UNRWA in recent years, following a long history of refusing to donate to its General Fund on political grounds.” As Irfan explains, their rationale was that Western states created the Palestinian refugee crisis, so they should be responsible for financing UNRWA.

The fiscal impact of the European countries’ decision therefore remains low but it still sends a “political message,” Al-Rifai told Fanack Chronicle. “We as an agency, really hoped that they would wait for the results of the investigation before taking action. Because we really distinguish between allegations and findings. And right now, we’re still in allegations phase.” Above all, UNRWA needs $1.2 billion to fulfil its mandate.

“We need UN member states to vote for the continuation of our mandate this fall. And this is what we’re very focused on right now,” stressed Al-Rifai.

The implications of UNRWA not being funded properly are potentially detrimental to the lives of millions of refugees, among them thousands of children and young people.

“UNRWA has already had to make drastic service cuts in recent years,” said Irfan. “The loss of funding from three states is likely to result in further cuts, including in essential services.”

“If we’re not able to open the schools in time in three weeks, there’s half a million children and teenagers who will be on the street,” said Al-Rifai. “That’s a big security issue.”

“The Israeli military will basically tell you ‘thank God for UNRWA,’ they’re providing [life-saving services] for the Palestinian people… that kind of lower the political temperature, and make the overall environment healthier and less volatile,” said Amr, recalling from his experience as a diplomat working on the region. “If UNRWA didn’t exist, you would have to invent it to exist.”

The Trump administration has nevertheless advocated for transferring the responsibility of UNRWA’s services to host countries and dismantling the agency.

Irfan says the current scandal could do the kind of reputational damage that may fuel Trump’s mission.

The meeting in September is therefore likely to see America vote against renewal of the mandate, but as a Haaretz journalist noted, other countries may also feel pressured to follow suit.

The crisis hitting UNRWA is therefore not just a crisis of funding or misconduct, but is connected to attitudes towards its existence due to its symbolic affiliation with the right of return. Global support for the organisation still remains high but the risk of Israeli and US pressure securing the severance of its mandate looms nearby, and this could have serious effects on those who use its services. 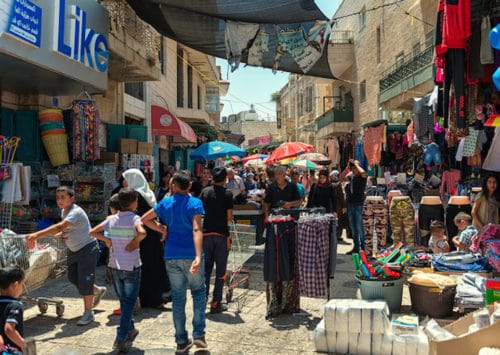 Economy of Palestine
During the war in 1948 (the Nakba), the Gaza Strip and the West Bank were inundated with a huge influx of Palestinian re...