Held in the Tunisian capital on 31 March 2019, the latest Arab League summit reaffirmed that the disputed Golan Heights and Jerusalem belong to Arab states and not Israel. Yet the league’s lack of unity and apparent inability to take concrete action once again raised the question of its relevance.

As has become routine, several websites listed the summit’s ‘fails’, treating the whole event as a joke. Articles appeared with headlines such as ‘Leaders hit the *snooze* button during Arab League summit… AGAIN’ on Stepfeed, or ‘Half of Arab leaders absent from Tunisia summit’ on Middle East Monitor.

Syria’s membership has been frozen since the beginning of its civil war in 2011. Although rumours that this freeze would be ended were circulated in the media in the weeks prior to the summit, no consensus was found on the matter.

Arab states allied with the United States (US), including Qatar, Saudi Arabia and the United Arab Emirates (UAE), backed the opposition to Syria’s President Bashar al-Assad for years, but Damascus was still able to steadily crush rebel fighters with military backing from Russia and Iran.

In December 2018, the UAE reopened its embassy in Damascus, saying it aimed to normalize ties with the country and curb risks of regional interference in ‘Arab, Syrian affairs’, an apparent reference to non-Arab Iran and Turkey.

This was the 30th meeting of the Arab League, which is a voluntary association of countries whose peoples are mainly Arabic speaking or where Arabic is an official language. Founded in March 1945 with British support during World War II as a way to rally Arab countries against the Axis powers, it originally aimed at strengthening ties among member states, coordinating their policies and directing them towards a common good. There are 22 members, including Palestine, which the league regards as an independent state. The league’s highest body is the council, composed of representatives of member states, usually foreign ministers, their representatives or permanent delegates. Each member state has one vote, irrespective of its size. The council meets twice a year, in March and September, and may convene a special session at the request of two members.

The recent summit’s agenda was expected to tackle Israeli escalation against the Hamas-run Gaza Strip, ongoing crises in Libya, Yemen and Sudan, alleged Iranian interference in Arab affairs and the fight against terrorism. Consensus was reached on several points: rejection of Jerusalem as the capital of Israel and Israeli control of the Golan Heights, and support for ‘the legitimate [Yemeni] government and the efforts of the UN envoy despite the lack of coordination with the Arab League’.

Israel seized the Golan Heights in the 1967 Six-Day War after Syria had for years used the strategic plateau to shell northern Israel. US President Donald Trump recognized Israeli sovereignty over the area on 21 March, tweeting: ‘After 52 years it is time for the United States to fully recognize Israel’s sovereignty over the Golan Heights, which is of critical strategic and security importance to the State of Israel and Regional Stability!’

A little over a year after Trump announced that Washington would recognize Jerusalem as the capital of Israel, the US consulate general in Jerusalem merged with the embassy, eliciting the anger of Palestinians and other Arab states.

Following the summit, the Arab League pledged to do more, including paying $100 million a month to the Palestinian Authority (PA) to plug the gap left after Israel blocked tax transfers to the Palestinian territories earlier in the year.

This focus on Palestine is far from heroic, however, according to Middle East expert Mouin Rabbani, who told Fanack, “The focus on Palestine by the league serves two purposes: first, it allows member states to posture on the international stage without having to pursue any meaningful actions to implement their decisions, and thus retain their privileged relationship with the US and where relevant Israel. Second, it is also intended to warn the US not to adopt particularly extreme policies on Palestine, which could serve to further undercut the domestic legitimacy of Arab rulers and governments. It is thus above all an exercise in maintaining stability, rather than achieving anything concrete.”

Indeed, the question of the league’s relevance is particularly salient at a time when the member states seem far from getting along or being able to act efficiently in the face of the multiple wars in their countries.

Marwan Bishara, al-Jazeera’s senior political analyst, wrote on 1 April : “The leaders adopted a dozen and a half resolutions that are bound to be forgotten tomorrow. They made no consequential decisions on any urgent challenge facing the Arab world today; not the war in Syria, not the humanitarian disaster in Yemen, not Libya’s failed state and certainly not on the conflict with Israel. The bar was so low that Iraq was congratulated during the summit for merely setting up a government, and paralysed Algeria was asked to help war-crippled Libya get back on its feet. The league completely ignored the Gulf crisis at the behest of Saudi Arabia…In short, Arab leaders are happy to play a blame game but fail to unite around a nuanced strategy to deal effectively with the various regional and international powers intervening in the Arab world.”

While some people see the existence of the league as a joke, it is worth pointing out that, created as it was with the aid of a Western country, it never found its identity. The divisions at the heart of the Middle East and North Africa make it nearly impossible for that identity to be found.

“I do not think the Arab League retains a capacity for relevance,” Rabbani said. “It has failed to play a meaningful role in any of the major crises that have beset the Arab world in recent decades, its sole contribution being to legitimize foreign intervention, which has incontestably made existing crises catastrophically worse.”

For him, the fundamental problem lies in the league’s governance: “It is dominated by individual states, who are able to impose their will on the institution as a whole. In contrast to, for example, the [European Union], less powerful states cannot prevent decisions by the more powerful ones. This reflects changes adopted during the 1980s to change from consensus to majority voting.”

Despite these shortcomings, scrapping the league would cut the only semblance of a link binding the member states together, and with it any hope that the current situation might evolve for the better. 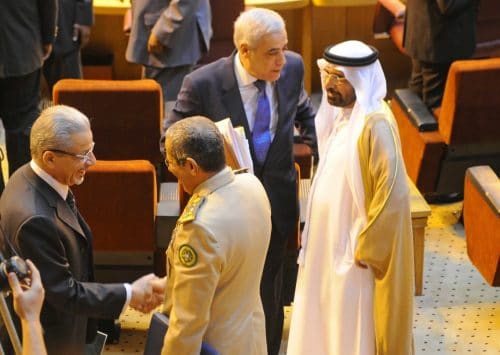 The Joint Arab Force—Will It Ever Work?
The situation in the Arab world and the growing militarization are the main factors explaining the decision to create th...