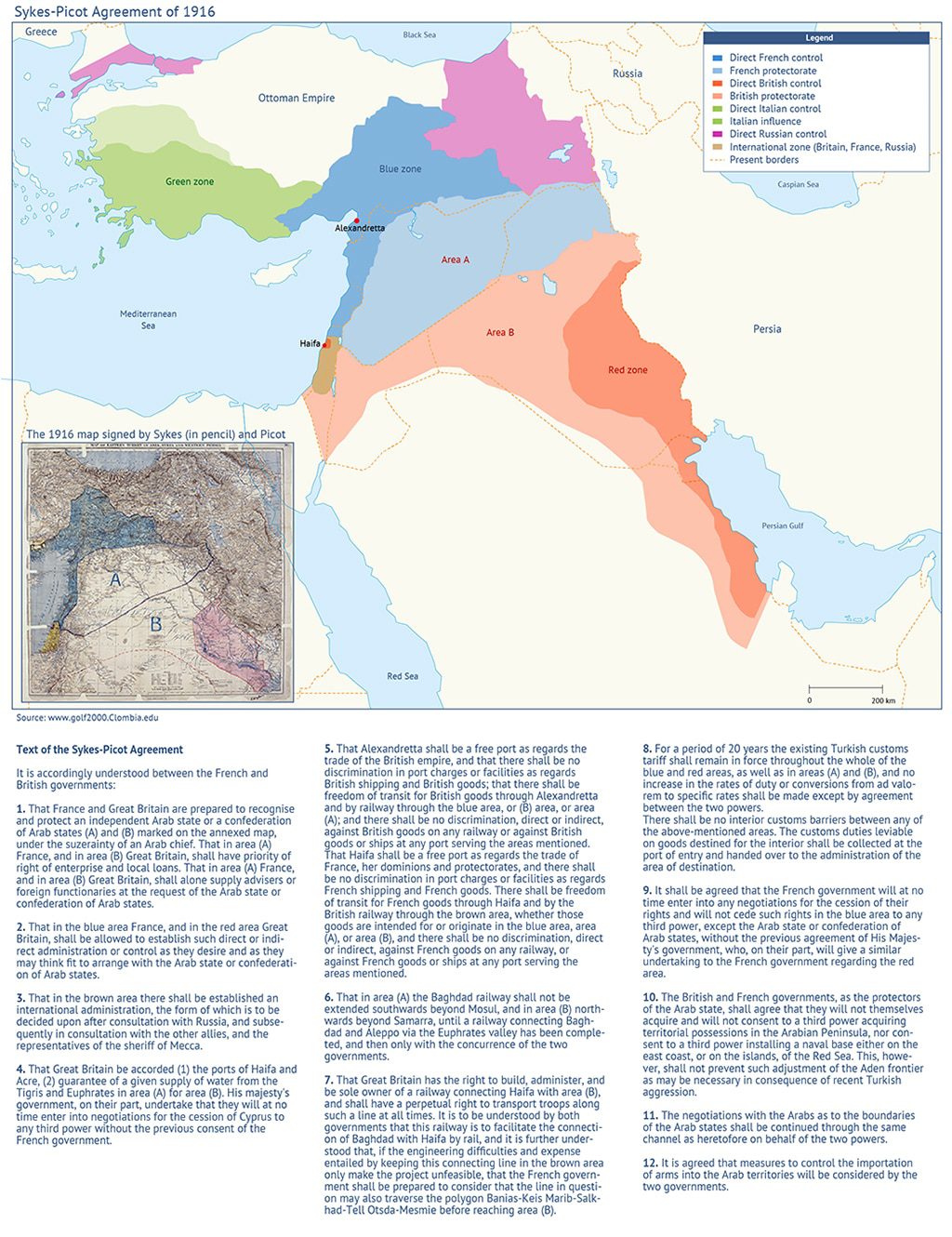 During the 16th and 17th centuries, and at the height of its power under Suleiman the Magnificent, the Ottoman Empire was multinational, multilingual and controlled much of southeast Europe, parts of Central Europe, Western Asia, the Caucasus, North Africa and the Horn of Africa. However, in the 19th century, the once feared Great Power began to crumble. Three separate events led to its eventual collapse, and the subsequent unrest in the Levant laid the foundations for what became known as the Sykes-Picot Agreement.

The first event was Egyptian autonomy under Mohammed Ali. A powerful Ottoman leader, he amassed such military power that he was able to threaten the rule of the Ottoman Sultan. In 1840, the Sultan declared Mohammed Ali ruler of Egypt for life, in return for Egypt remaining within the Ottoman Empire.

The second event was Serbia’s struggle for independence. This lasted almost a century, beginning with the first uprising in 1804, followed by a second in 1814 and finally the war with Turkey in 1876-8. The conflict extended Serbia’s national borders and resulted in full independence, which was acknowledged in the Congress of Berlin in 1878.

The third was the Greek independence movement, which started in 1821 following the failed attempt by the Ypsilantis family – part of the Greek aristocracy that pushed for insurrection – to defeat the Turks near Bucharest. This led to impromptu uprisings throughout Greece around 25 March (later pronounced independence day). However, Ottoman armies allied with Mohammed Ali’s Egyptian troops brutally suppressed the insurgency. The suppression attracted the attention of the first generation of European democratic states. On 6 July 1827, Great Britain, France and Russia signed the Treaty of London, which allowed them to intervene together on behalf of the Greeks.

In the naval Battle of Navarino, the allied fleets decisively defeated the Ottomans and Egyptians, inflicting large numbers of casualties on what were labelled the ‘Muslim forces’. The battle became a turning point to Greek independence in 1832, with the signing of the Treaty of Constantinople. The treaty forced the Turks to relinquish sovereignty over the Peloponnese, and declared the Árta-Vólos line as its northern border.

By the second half of the 19th century, corruption and nepotism had pushed the Ottoman government to the brink of bankruptcy. As corruption spread, the empire weakened and began to shrink on all frontiers.

In 1860, a revolt broke out in Lebanon when Maronite Christians took up arms against their Druze overlords. The rebellion was violently subdued at an early stage. In The Encyclopedia of Conflicts Since World War II, James Ciment estimates that 11,000 Maronite were massacred. The Ottoman Empire failed to stop the violence, some say expressly, which led France to intervene under the banner of its self-proclaimed role as ‘protector of the Christians of the Levant’. A year later, the French forced the Ottoman Sultan to create an autonomous Christian local government in Lebanon. They withdrew their troops, but were greatly concerned about what might happen in the region if the Ottoman Empire collapsed completely.

The French saw two impending dangers. The first was the creation of a cluster of mutually-hostile small states and tribal nations, which would also have impacted French trade interests. The second was the fear of an opportunistic takeover of a highly desirable region by other superpowers, such as Russia or Great Britain, due to the power vacuum the collapse of the empire might cause. With this in mind, the French began putting secret contingency plans for the Middle East in place. They informed Russia and Great Britain of their interest in the region, which they considered to be within their sphere of influence, so that these countries would not to be taken off-guard when France moved in to claim hegemony over it.

However, subsequent events in Egypt set off alarm bells for the French. At the time, Egypt was still an autonomous territory within the Ottoman Empire. By the late 1870s, the Egyptian government had fallen into massive debt due to failed economic policies and the collapse of the world cotton market. A group of European states established a debt repayment agency called the Caisse de la Dette, with British and French controllers monitoring the Egyptian government’s revenue and expenditures. This exacerbated feelings of resentment among the Egyptian people, and triggered a military coup led by Ahmed Urabi. Great Britain sent troops to Egypt to suppress the unrest, overthrow the military junta and restore the previous government. With Egypt effectively under British control, the French saw a real threat to their Middle Eastern ambitions.

At the beginning of World War I, the Ottoman Empire sided against the Allied Powers, carrying out a surprise attack on Russia’s Black Sea coast and ports on 29 October 1914. Russia, France and Great Britain responded by declaring war on the Ottoman Empire on 1 November 1914. With the empire’s collapse becoming increasingly imminent, a conflict of interest arose between Great Britain and France. As the British were ready to acknowledge France’s interest in the Levant, they were also worried about giving France control of a wide area which could threaten Great Britain’s control of both the Suez Canal and British India (trade routes), given that the borders of the region had not yet been defined.

In what came to be known as the Hussein-McMahon Correspondence, a series of letters exchanged between Hussein bin Ali, Sharif of Mecca, and Sir Henry McMahon, British High Commissioner in Egypt, between 14 July 1915 and 30 January 1916, it appeared that the British had urged Arabs with a growing desire to break away from the Ottoman Empire to seek independence even through revolt. In return, they would receive recognition of Arab independence after World War I ‘in the limits and boundaries proposed by the Sharif of Mecca’. However, the promises later clashed with the Balfour Declaration, a letter dated 2 November 1917 which confirmed Great Britain’s support for the establishment of a national home for the Jewish people in Palestine, and were later disputed by the British government, mainly in the case of Palestine, which the Sharif understood would be given to the Palestinians.

In March 1915, the secret Constantinople Agreement was reached between the Triple Entente (from the French entente, meaning friendship, understanding or agreement). In the event of victory over the Ottoman Empire and the Gallipoli peninsula, Great Britain and France promised the Russians Constantinople and the Dardanelles (the crucially important strait connecting the Black Sea with the Mediterranean). In return, Russia would facilitate British claims over other remaining areas of the Ottoman Empire, including the oil-rich region of Mesopotamia. Nevertheless, the failure of the Dardanelles campaign, the threat Great Britain saw in Russian expansion and the subsequent Bolshevik revolution resulted in the agreement not being carried out.

Over the course of the following year, representatives from France and Great Britain negotiated what came to be known as the Sykes-Picot Agreement, a tentative agreement on the division of spheres of influence in the territories of the disintegrating Ottoman Empire. The agreement was named after its lead negotiators, diplomats Sir Mark Sykes of Great Britain and François Georges-Picot of France.

The agreement was eventually concluded on 19 May 1916. These spheres of influence meant that each country would, within their designated sphere, have the authority to establish such direct or indirect administration or control as they desired or saw fit to arrange with the Arab State or Confederation of Arab States. The two diplomats’ pencils divided up the map of the region into states that cut through ethnic and religious communities. The prominent Lebanese historian Kamal Salibi believes that the main considerations at that time related to oil and transportation routes. A century later, many Arabs continue to blame the subsequent violence in the Middle East, from the occupation of Palestine to the rise of Islamic State, on the agreement. Accordingly, Great Britain was given direct control of central and southern Mesopotamia, around the Baghdad and Basra provinces, whereas the Syrian coast and much of modern-day Lebanon went to France.

However, in light of the religious significance and sensitivity of Palestine, and with the Balfour Declaration being drafted behind closed doors, the British refused the idea of a single country administration dominating a land sacred to Jews, Christians and Muslims. These concerns eventually led to Palestine being put under international administration.

It was also agreed that the rest of the territory, which included a huge area of modern-day Syria, Mosul in northern Iraq and Jordan, would have local Arab chiefs under French supervision in the north and British supervision in the south. Moreover, Great Britain and France would retain free passage and trade in the other’s sphere of influence.

These agreements were realized through a series of treaties that followed the end of the war. The Treaty of Sèvres was the first. Signed on 10 August 1920, it marked the beginning of the partitioning of the Ottoman Empire and its eventual annihilation. The terms included the renunciation of all non-Turkish territory that was part of the Ottoman Empire and cession to the Allied administration. Notably, the ceding of the Eastern Mediterranean allowed the creation of, among others, Mandatory Palestine, Mandatory Iraq and the French Mandate for Syria and the Lebanon.

After Turkish nationalists, unhappy with the loss territory, rejected the Treaty of Sèvres, the Treaty of Lausanne was drafted and signed on 24 July 1923. Under the terms of this treaty, Turkey would renounce all claims to the remainder of the Ottoman Empire and in return the Allies would recognize Turkish sovereignty within its newly defined borders.

Finally, with the partitioning of the Ottoman Empire, the Sykes-Picot Agreement divided the Ottoman Arab provinces outside the Arabian Peninsula into areas of British and French control and influence. The British gained control of Palestine in 1920 and ruled it from 1923 until 1948. They also ruled Mandatory Iraq from 1920 until 1932. The French Mandate for Syria and the Lebanon lasted from 1923 to 1946.