All
Wars and Conflicts

The Darfur region lies in western Sudan, near its borders with Libya, Chad, and the Central African Republic. The bloody conflict in the region has led to the deaths of thousands of people and the displacement of more than two million. This has been described as the world’s worst humanitarian crisis and has been called genocide, often being compared to the genocide in Rwanda. An estimated 300,000 people have been killed in this conflict since 2003. Since then, people have repeatedly come under attack by government troops, pro-government militia, the Janjaweed, and rebel groups. There are also frequent fights between tribes.

For more on the War in Darfur, visit the page below: 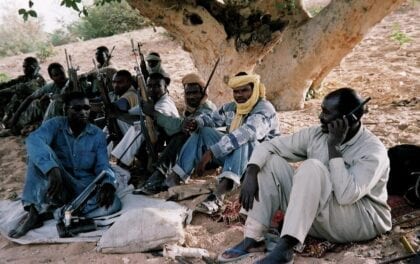 Civil war in the south

The Egyptians established the province of Equatoria in 1874, where Arab slave traders intensified their activity, targeting local and foreign markets. The local communities were seriously harmed; the memory of that exploitation would be long lasting.

From 1922 to 1947 (when the policy was abandoned), the British operated a separate administration in southern Sudan. The social and economic development of the region was ignored, except for some social services provided by Christian missionaries.

The Southerners opposed the new policy, fearing it would bring northern domination and the return of slavery, and that it would put their cultural and political rights at risk. The Juba Conference of 1947 gave voice to these fears, but it issued no decision on unity, despite later false assertions to the contrary.

Southern fears of northern domination proved well-founded at the negotiations on self-determination of Sudan in the early 1950s. The Northern nationalists excluded the Southerners from those negotiations and breached pre-independence promises to create a federal system. After the February 1953 self-rule agreement, it appeared that Northern leaders retreated from their commitments to federalism. This soon led to the development of the secessionist armed struggle. The movement began in 1955, a few months before independence when the Equatoria Corps in Torit mutinied.

For more on the War in the south, visit the page below:

Sudan Defence and Security Wars and Conflicts
You may also like