In May 1997 the little-known cleric Sayyed Mohammad Khatami won the Presidential election with a landslide victory of 70 percent. Running on a platform of liberalization and reform, Khatami won the support especially of young men and women.

During his two-term presidency (2 August 1997–3 August 2005) he advocated freedom of expression, tolerance, civil society, and a ‘Dialogue among Civilizations’, as well as constructive diplomatic relations. His reformist followers were usually known as the 2nd of Khordad Movement, named for the date in the Iranian calendar on which Khatami was first elected President.

In the first years of his presidency, social freedom and freedom of speech and press improved, but Khatami’s policies clashed with more conservative elements in the Iranian government, and when his promised reforms were not accomplished, public disappointment and disenchantment grew. While some suggested Khatami never really intended to reform Iran, others believed that he lacked the power to do so and was blocked by hard-line elements in the clerical establishment.

Following the closure of the reformist newspaper Salam in July 1999, pro-reform students at Tehran University demonstrated. Six days of rioting ensued, during which security forces arrested more than 1,000 students. In February 2000, liberals and supporters of Khatami gained a majority in Parliament (the 6th Majles) for the first time. Expectations for reform were high but in the end were not realized. A month after the elections, the conservative judiciary banned sixteen reformist newspapers and arrested numerous journalists following the adoption of a new press law.

By stressing ‘Dialogue among Civilizations’ Khatami sought to improve commercial and geopolitical relations with Western Europe and Japan. In the early 2000s, the Khatami administration also attempted to find common ground with the United States, but the George Bush administration declared Iran part of the ‘Axis of Evil’ in 2002. Relations deteriorated further in 2004, because US officials believed that Iran planned to develop a nuclear weapon. In the 2004 elections, conservatives regained control of Parliament, and thousands of reformist candidates were disqualified by the hard-line Guardian Council. 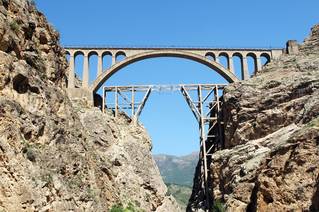 Historical development and potential
From 1925 onwards, Reza Shah Pahlavi set out to rapidly modernize Iran. He sought to develop a strong central government...