How the Recent Iranian Protests Compare to the 2009 Uprisings

Hundreds of people took to the streets of Iran’s second city Mashhad on 28 December 2017 to protest against rising prices and President Hassan Rouhani’s economic policies. From the beginning, rumours circulated about the ‘real forces’ behind the protests, with some sources suggesting that the demonstrations were staged by hardliners to put pressure on the ‘pragmatist‘ president. These rumours were reinforced when Vice-President Eshaq Jahangiri warned the hardliners about playing with fire. Although it is difficult to determine exactly who is pulling the strings, the Mashhad protests sparked demonstrations across the country. Although they made international headlines for a week or so, many commentators found it difficult to make sense of the situation, and it was often compared to the 2009 protests.

However, the  scope and scattered nature of the recent protests are not comparable to 2009 or in fact any other uprising in the history of the Islamic Republic. Historically, major social mobilizations against the state have taken place in cities like the capital Tehran. Even the 1979 revolution was primarily an urban uprising, centred mainly in Tehran and other major metropolises. Hence, for the security forces, maintaining order in Tehran has been tantamount to controlling the rest of the country.

The recent protests, by contrast, have decentralized the dissent and brought marginal areas into the political and security equation. The other main difference is the numbers. Although the 2009 protests were mainly limited to the major urban centres, more people participated in them. While the recent protests have been more widespread and most of the gatherings have not gone beyond the thousands, tens of thousands at the most, millions of people took part in the 2009 protests.

Over the last two decades, the country has witnessed two major protests (the student protests of 1999 being the other one), both of which were focused in Tehran and other major cities. The ethnic dimension is important too because in 2009, there were hardly any large uprisings in non-Persian urban areas. Although this time Tabriz, a mainly Azari city, was again silent, some other Azari towns such as Ardabil joined the protests. The Kurdish regions were also quiet in 2009, but this time Kermanshah became a significant centre of the protests.

The recent dissent has been dubbed the ‘uprising of the poor’, who have been hardest hit by the country’s economic woes . The protests that followed the allegedly rigged presidential election in 2009 mainly attracted middle-class protestors who prioritized their political and cultural grievances over economic demands. Although it is difficult to separate economic and political demands, rising prices and growing inequality were the main instigators of the recent protests.

Iranian factional politics played a defining role in the 2009 protests. Reformist leaders such as Mir Hossein Mousavi and Mehdi Karroubi mobilized millions of people while the hardliners were united behind Mahmoud Ahmadinejad. These leaders and their supporters believed that the presidential election was rigged in favour of Ahmadinejad. In the end, the struggle between these two factions largely defined the protests. However, the protests that broke out in late 2017 have – apart from the first demonstration in Mashhad – had only a small factional dimension, which took every faction of the Islamic Republic by surprise. Most of the slogans were anti-establishment and hardly any of the factions have benefited from the recent events. More importantly, reformist factional leaders like Muhammad Khatami seem to have very little influence over the angry protesters.

Also unlike 2009, the recent unrest has had no leadership and no sense of unified objectives. In 2009, the protest started with a single slogan of ‘Where is my vote?’ This time around, the cries for economic reform quickly turned into anti-establishment slogans. For the first time since the founding of the Islamic Republic in 1979, some protesters demanded the return of the monarchy. Many of the defamatory slogans directly targeted the supreme leader, one of the country’s most revered figures. Other slogans targeted Iran’s interventionist foreign policy, such as ‘No Gaza, no Lebanon, I sacrifice my life for Iran’, ‘Leave Syria alone, look at what is happening at home’. Although in the later stages of the 2009 uprisings, some protesters went beyond factional politics and chanted slogans against the supreme leader and Iran’s interventionist foreign policy, there were more well-defined political objectives.

The two protests do share one similarity, however: neither the protests nor the subsequent crackdown have had an impact on Iran’s relations with the outside world. In both cases, establishment figures such as the supreme leader and the president blamed ‘foreign agents’ for paving the way for some of the deadly clashes. Although the recent protests have not been as bloody as 2009, the US government was quick to warn the regime against cracking down on protesters, and President Donald Trump posted a Tweet publicly encouraging the protestors to fight on. This is a dramatic turnaround from his predecessor’s quiet diplomacy, which disappointed many protestors in 2009. One of the popular slogans at the time was ‘Obama, you are either with them or us’. The current unrest has served only to strengthen Trump’s view that the Iranian leadership should go. However, his open criticism may backfire, say experts, by opening the door for hardliners to increase repression and then blame America. 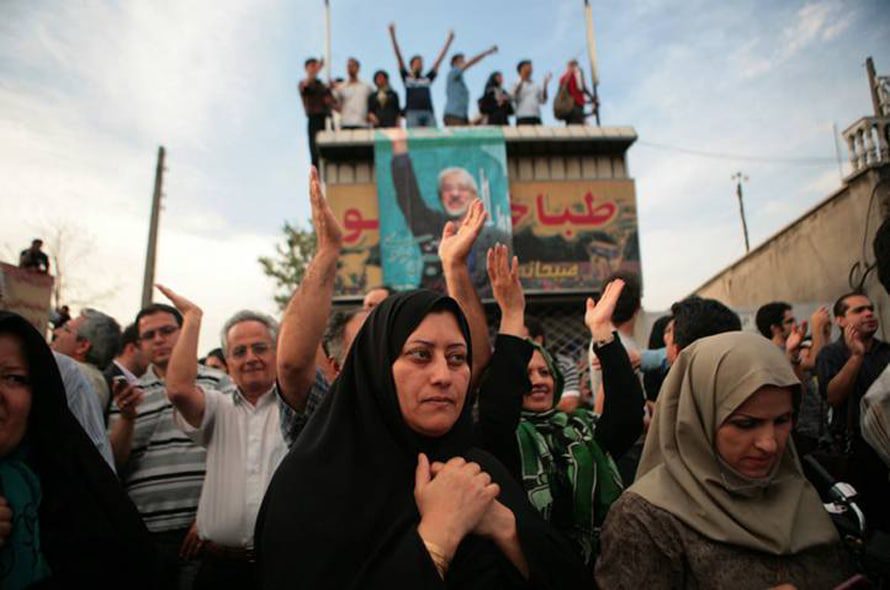