In February 2019, Iran celebrated the 40th anniversary of its Islamic revolution. By overthrowing the monarch (shah), revising the presiding political worldview and ideology and introducing huge changes to Iranian society and foreign policy, the Islamic Revolution of 1979 altered the course of the country’s history. Ever since, a non-aligned position has dictated Iran’s foreign policy and Islamic ideologies have guided its government and institutions.

There have been many studies on the causes of the revolution and Iran’s anti-Western position thereafter. Four decades later, the event is still a regular topic of academic and public debate both within Iran and beyond.

A common opinion is that economic factors were the main catalyst. The Shah started developing Iran’s economy at a rapid pace after the oil boom of the 1970s. This created high expectations among the middle and lower classes. When oil revenues collapsed in the late 1970s, the regime was forced to stop major economic projects, which gave rise to widespread disappointment and discontent that eventually sparked the revolution.

The second economic explanation is a leftist one, which posits that the shah was representing the minority upper class, and the masses (peasants, workers and others) rose up against him to take back their rights.

The third explanation is a societal one, which focuses on the religious and conservative nature of Iranian society. Accordingly, the shah’s development projects with their economic and cultural dimensions outraged conservative Iranians and their ulama (religious scholars) who ultimately led the revolution and overthrew the shah.

The fourth explanation focuses on Iranians’ long-standing frustration with outside powers – mainly European, Russian and the United States, the latter being viewed as the shah’s main backer – and their meddling in Iran’s internal affairs. The revolution was, accordingly, aimed at ridding Iran of this interference and reclaiming Iran’s sovereignty. This reading is premised on the belief that the shah was Washington’s man in Iran and the broader region.

The last main argument is that the shah’s tyranny, which followed the 1953 US-British coup against Mohammad Mossadegh’s democratically elected government, continued for 25 years, and the revolution was intended to free Iran of this tyranny and establish a democratic regime. This reading assumes that it was a cry for freedom that united different political factions and ideologies.

There are still others who argue that a combination of the above mentioned factors caused the revolution. In other words, the oil revenue crisis of the late 1970s and the huge wealth gap between the classes, frustration with the US’ backing of the shah and his iron-fisted rule were all present in the minds of the revolutionaries. Just a year prior to his overthrow, the shah seemed robust enough to withstand any internal unrest or foreign threat. US President Jimmy Carter even visited the capital Tehran on New Year’s Eve in 1978 to toast the shah for making Iran an “island of stability”. Twelve months later, that island had been engulfed by instability, witnessing some of the biggest uprisings the world has ever seen.

Over the decades, the shah and his notorious secret police and intelligence service were able to oppress or neutralize his main opponents. The list includes the communist Tudeh Party, the nationalist National Front, the Social-Islamists, the Islamist Fadayian and small militias that emerged every now and then during the 1950s and 1960s and were very much influenced by the Maoist idea of the peasant revolution. The regime also forced into exile prominent opposition figures whose imprisonment or trial would have caused the regime social damage. Ayatollah Ruhollah Khomeini was one of those who was forced into exile in 1964, after fiercely criticizing the shah for granting US military advisors and personnel in Iran unprecedented privileges and immunities. Thirteen years later, Khomeini returned to Iran after spending most of those years in Najaf, Iraq.

Different Iranian opposition groups and figures found in Khomeini someone around whom they could congregate and push forward an anti-shah movement. In 1978, Khomeini was expelled from Iraq at the request of the shah. He moved to France after Kuwaiti authorities refused to let him into Kuwait. In France, he had unprecedented freedom to attack the shah and push for change in Iran. His messages were received with enthusiasm and played a key role in rallying millions of Iranians to his cause.

The shah finally decided to leave the country on 14 January 1979 after authorizing the Royal Council to rule in his absence and naming Shapour Bakhtiar, a member of the National Front, prime minister, an appointment aimed at appeasing the opposition. But Khomeini, who established the Council of the Islamic Revolution, was not appeased and demanded that Bakhtiar step down after the shah’s departure.

Khomeini returned to Iran on 1 February 1979 and approved the Revolutionary Council’s decision to appoint Mehdi Bazargan, a well-known nationalist figure, as interim prime minister three days later. This effectively gave Iran two governments, and civil war seemed a real possibility. Clashes erupted between revolutionary militias and volunteers on the one hand and the Royal Guards on the other, but when the army announced its neutrality on 11 February, the revolutionaries triumphed.

Bakhtiar fled the country. Many others were captured and put on trial, including former prime minister Amir Abbas Hoveida, Foreign Minister Abbas Ali Khalatbari and numerous military commanders and security figures. Many of them, especially those known for their hostility toward the revolution and its leaders, were executed. More importantly, the monarchy was replaced by an Islamic republic. On 1 April 1979, a referendum was held on whether or not to establish an Islamic republic, and 98.2 per cent of the people voted in favour. In December 1979, another  referendum was held on the republic’s constitution, and this time 99.5 per cent of people voted in favour of the constitution. It is fair to say that thereafter, Khomeini and those loyal to his brand of politics, outmanoeuvred the secular figures and parties to win the revolution.

The Islamic Republic was established with a velayat-e faqih system with a supreme leader and a Guardian Council scrutinizing the law-making process to keep it within the boundaries of sharia (Muslim law). As such, sharia, including the obligatory veiling of women, became part of daily life. While these bodies reflected the Islamic nature of the new regime, the election of a president and parliament and the accompanying political checks and balances were intended to reflect its republican nature.

Theoretically, the supreme leader is the man to whom all the ways end. The Supreme National Security Council, headed by the president, is tasked with strategic decision-making. But again, theoretically, the supreme leader has the authority to overturn its decision, although he has not used this authority in the past two decades. In fact, the supreme leader traditionally does not impose his priorities but cautions against those policies that he sees as unbefitting to the republic’s revolutionary and Islamic principles. For instance, he agreed with current president Hassan Rouhani’s decision to sign the 2015 nuclear deal, known as the Joint Comprehensive Plan of Action (JCPOA), despite being in favour of a policy that would allow Iran to play international powers off against one another. Another example is when he did not impose a new policy after US withdrawal from the JCPOA, but opposed engaging the Trump administration.

Forty years on, the Islamic Republic is sticking to its worldview and the dichotomy of its original religious ideological and republican dimensions. The ability to be independent from international influence is something many Iranian officials and military commanders brag about. Still, this independence comes at a price, a price that Iranians feel on a daily basis with sanctions depriving many of them of a normal life. Much progress and development has been made in post-1979 Iran that continues to win the regime support. At the same time, there are areas that remain underdeveloped and for which the republic attracts regular criticism.

Even so, Iran’s model of governance in which Islamic and democratic values are practiced to some extent is unique. This model faces several challenges, including international sanctions, but it has already proven its resilience over the course of four decades. 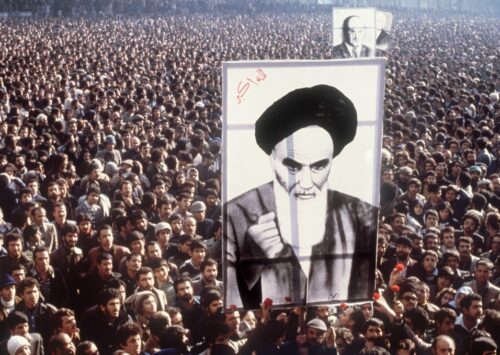