Immediately after returning to power, the Shah reversed Mosaddeq’s policies. Diplomatic relations with Britain were restored in December 1953, and a new oil agreement favourable to Western companies was concluded the following year. The United States arranged for immediate economic assistance of USD 45 million. The Shah became an important ally to the West, and Western countries increasingly (re)gained influence in Iran.

The Shah also carried out a national development programme, called the White Revolution. Fearing both Soviet influence and internal opposition, he sought to bolster his regime by moving closer to Britain and the United States.

The White Revolution, a far-reaching series of reforms launched in 1963, was intended to transform Iran into an economic and industrial power. It included, among other things, land reform, the construction of expanded road, rail, and air networks, dams, and irrigation projects, and support for industrial growth. The Shah also established a literacy corps and a health corps for the large but isolated rural population and extended suffrage to women.

The White Revolution won considerable support among parts of the population but did not deal with other sources of unrest. Economic conditions remained bad for the poorer classes, and wealth remained unequally distributed. Moreover, after the overthrow of Mosaddeq, a period of political repression began, as the Shah concentrated power in his own hands. Political parties such as the Tudeh and the National Front were banned, press freedom curtailed, and the secret police (SAVAK) strengthened.

The far-reaching reforms and authoritarian rule of the Shah provoked increasing political discontent, especially among students and intellectuals seeking democratic reforms and religious leaders who feared losing their traditional authority. It was during this period that a religious leader in Qom, Ayatollah Ruhollah Musavi Khomeini, gathered a following as an antigovernment leader. From the onset Khomeini denounced the Shah’s plans, asserting that he had violated the Constitution, spread moral corruption in the country, and been subservient to the United States and Israel.

On 3 June 1963 – the highly symbolic day of Ashura, commemorating the martyrdom of Imam Husayn – Khomeini gave a fiery speech at Feyziyeh College, at the seminary centre in Qom, in which he compared the Shah to Husayn’s enemy, the Umayyad caliph Yazid. He warned the Shah that if he did not change his policies the day would come when the people would force him to leave. When Khomeini was arrested two days later, three days of riots ensued, the worst since the overthrow of Mosaddeq. The riots were suppressed harshly, and the Shah restored order by force.

Following the riots of June 1963, there was little overt political opposition. Many of the political parties that had been active since the beginning of the 1950s were weakened by internal disagreement, arrests, and exile, but opposition gradually increased, and opposition ideologies became more radical.

Khomeini, however, continued his fierce opposition. In November 1964, after several periods in prison, he was forced into exile, first in Turkey, then in Iraq, and spent more than fourteen years in exile. From his exile in Najaf (in Iraq), and later in France, millions of audio tapes of Khomeini’s sermons denouncing the Shah spread across Iran.

In October 1967 Mohammad Reza Shah Pahlavi crowned himself King of Kings (Emperor of Iran) and his third wife, Farah Diba, shahbanu (empress), which further increased societal discontent. In October 1971 the Shah held an extravagant celebration of 2,500 years of Persian monarchy. The wealth arising from the oil industry was unequally distributed among Iranians, and the Shah’s lavish exhibition of wealth – the New York Times estimated the costs at USD 100 million – was disapproved of by many. 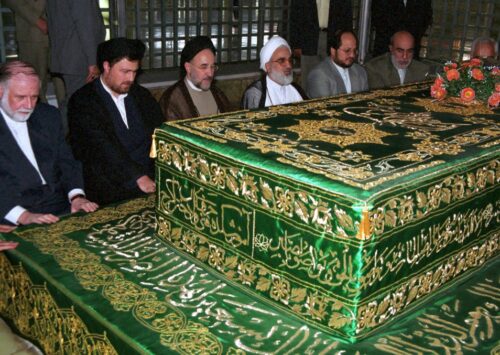 ©WIKIMEDIA COMMONS
JOEL ROBINE ©AFP
"Ignorance leads to fear, fear leads to hatred, and hatred leads to violence.
This is the equation."
IBN RUSHD/AVERROES (1126 – 1198)
We are a Dutch not for profit organisation (NGO), financed solely by individuals who share our belief in the importance of publishing and disseminating reliable, unbiased information on the Middle East & North Africa region. To represent the voice of the region’s people, we carefully echo the region’s heartbeat by offering fact-checked and therefore credible information.
Your support is greatly appreciated and helpful!
Donate