Iran (officially the Islamic Republic of Iran) was known as Persia until 1935. This country became an Islamic republic in 1979 after overthrowing the ruling monarchy and forcing Shah Muhammad Reza Pahlavi into exile.Iran is located in southwest Asia. It is bordered to the north by Azerbaijan, Armenia, Turkmenistan, the Caspian Sea. To the east Iran is bordered by Pakistan and Afghanistan, while to the south it is bordered by the Arabian/Persian Gulf and the Gulf of Oman. To the west Iran is bordered by Turkey and Iraq. Iran also has sovereignty at about 12 islands in the Gulf. The total area of this country is 1,648,195 square kilometers.

Additionally, wrestling has a long history in Iran and is considered a national sport. The most popular wrestler and Iran’s national champion is Gholamreza Takhti (1930-1968). Takhti won Iran’s first gold medal at the Olympic Games in Melbourne in 1956.

Moreover, Iran’s terrain is characterized by a rugged mountainous edge, a central high basin with deserts and mountains, and small, intermittent plains along its coast.

Below are the publications by acclaimed journalists and academics concerning the Iran country file:

Below are the latest articles by acclaimed journalists and academics concerning the topic ‘Iran’. These articles are posted in this country file or elsewhere on our website: 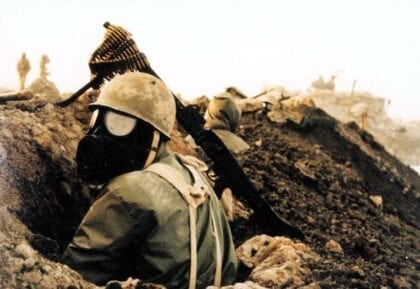 On 22 September 1980, Iraqi fighter-bombers took to the skies in an operation to take out …

The Kurds in Iran

The Kurds, constituting one of the oldest nations of the Middle East, are in the spotlight …