The majority of Iran’s pre-collegiate public schools are single-sex. Universities are coeducational. Because more than half of the country’s population is under the age of 25, the education system is under great pressure. There are more than 113,000 schools throughout Iran, teaching more than 18 million children. It is estimated that there are almost 1 million teachers in the education system.

In 2014, Iran had more than 200 public and more than 30 private institutions of higher education, serving about 4.5 million students. Admissions to post-secondary courses are highly competitive, and university places are won through the National Entrance Examination (Konkur, from the French term concours). The largest and most prestigious public university is the University of Tehran. In 2007 more than 60 percent of university students were female. The academic year runs for 10 months, from September to June.

While the closing of the gender gap in education has been praised as one of Iran’s important achievements, there are rising concerns inside Iran about women outnumbering men in universities. Hard-line members of Parliament have occasionally branded women’s increased numbers a risk and have called for a gender quota. They have argued that, because men are the traditional bread winners, they have to be guaranteed places in higher education and the workforce. Another argument is the rising age of marriage, and divorce numbers. Iran has admitted men and women by quota in some fields in recent years, but in 2008 plans were launched mandating that both men and women should constitute at least 30 percent of registrants in all university courses.

In 2010 Iran had 3,790,859 college students, of whom about 50.5 percent were men. In previous years it had been reported, based on official figures, that women made up 60-65 percent of university entrants. 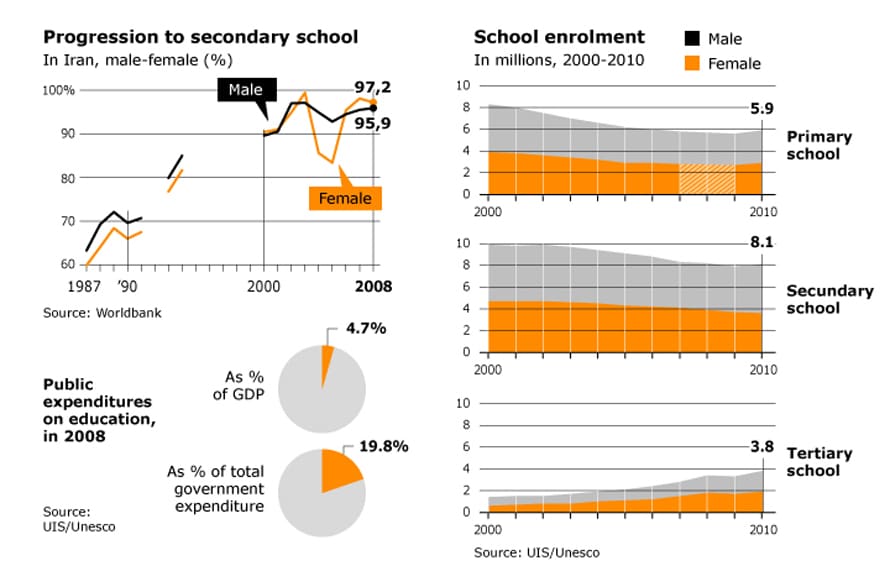