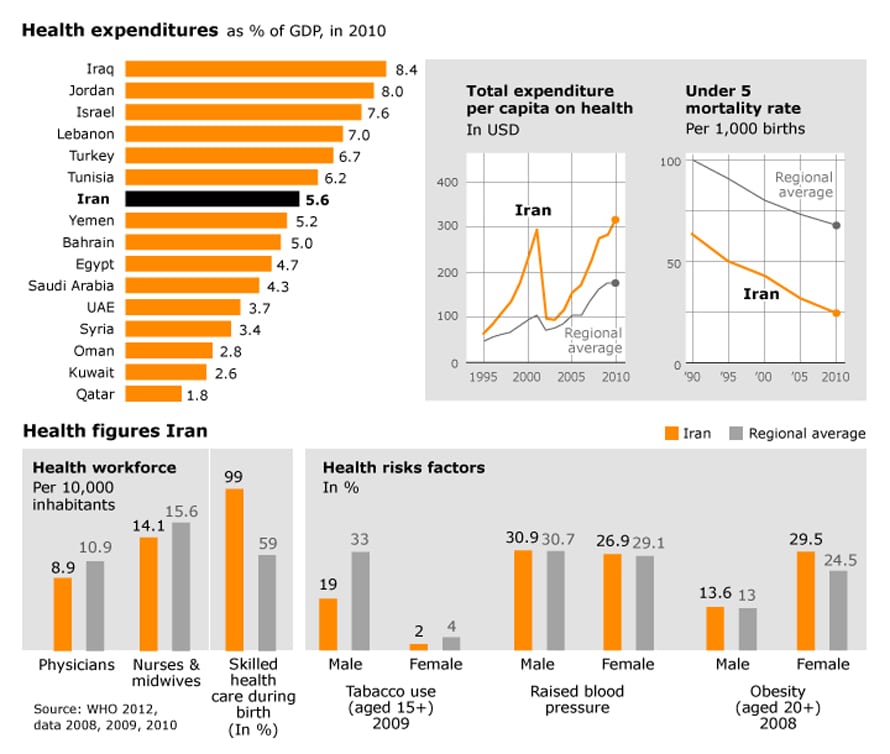 The Ministry of Health and Medical Education finances and delivers primary health care. The establishment of a national health care system has resulted in major improvements in health. The overall life expectancy in Iran rose from less than 62 years in 1988 to almost 70 years in 2000 and 74.3 years in 2013.

The incidence of several communicable diseases has been reduced, and maternal and child health have improved. Mortality rates for infants (less than 1 year old) and children (up to five years old), which were as high as 93 and 153 per 1,000 live births in 1974, had fallen to about 21 and 25 respectively by 2009.

Halting and reversing the HIV/AIDS epidemic by the government-imposed deadline of 2015 represents one of the major challenges facing Iran. According to the World Health Organization ‘the estimated number of HIV-positives is greater than 30,000, with 700 AIDS cases’.

Intra-venous drug use and needle sharing are major problems, particularly among the prison population. If needle sharing (accounting for 62 percent of transmissions) is not dealt with properly, the consequences for the spread of HIV and hepatitis may be catastrophic. Because a large part of Iran’s population is now coming of reproductive age, increased services will be required for the promotion of sexual health and responsible behaviour (at present, 8-9 percent of HIV/AIDS cases are infected through sexual contact.)

Drug addiction is a major problem in Iran. In 2009 the number of drug abusers (including opium and heroin) was estimated to exceed 1.2 million and to be on the increase. According to official estimates, about 130,000 people in Iran become addicted to drugs each year. In spite of its harsh anti-drugs policies, the government is, according to some Iranians, responsible for the high addiction rate. The lack of employment and strict social control drives Iranian youths towards the use of drugs.