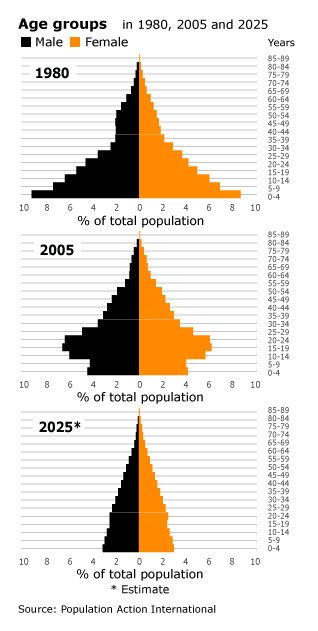 The National Youth Organization defines a youth as a person aged 14-29 years. Because nearly three quarters of Iran’s population is under the age of 30, its youth are an important force. The high birth rate in the years following the Revolution (1979-1991) affected the economy and reduced the per capita gross domestic product (GDP) and still has a large impact on Iran’s society and economy.

Entry of this group into the job market has created high unemployment. In 2014, unemployment was particularly high among those aged 15-24, estimated at 26.1 percent for men and 41.4 percent for women. Marriage and family creation in this large population group will also increase the demand for housing and will generate a second wave of increased fertility.

Iranian youth are also an important political factor. In January 2007, the voting age was raised to eighteen years from fifteen. Many of Iran’s youthful population, born after the 1979 Revolution, long for a relaxation of the government’s strict social and political control.

Former reformist President Mohammad Khatami credited his landslide victories mostly to Iran’s youth and women. Until the violent crackdown on student protests in 1999, student activism was the most important force in pushing the government toward change. Although less visible than before, universities remain important sources of activism and protest.

Many of Iran’s youth expressed their power and potential in support of the Green Movement and through their opposition to the controversial presidential elections of 2009.