In its ‘dual containment’ policy (targeting both Iran and Iraq), after its military victory in Kuwait, the US gave priority to dismantling Iraq’s stocks and production facilities of weapons of mass destruction. A United Nations Special Commission (UNSCOM) was created for this purpose, consisting of an international body of weapons experts. In order to force Iraq to cooperate, the UN maintained its comprehensive sanctions. Although Iraq resisted cooperation from the start, UNSCOM seemed to be making good progress in its first years. The limits of its work became evident, however, when, in August 1995, Saddam Hussein’s son-in-law and Minister of Military Industries, Hussein Kamel al-Majid, fled to Jordan and there revealed to the CIA Iraq’s secret plans for biological warfare.

The revelations by Hussein Kamel poisoned the atmosphere between UNSCOM and Baghdad, after which incidents and ultimatums followed another. This led, in December 1998, to the withdrawal of UNSCOM personnel. The United States and Great Britain responded with Operation Desert Fox (December 17-20), carrying out air bombardments of military and other facilities. UNSCOM did not resume its work in Iraq after that and four years later was replaced by the United Nations Monitoring, Verification, and Inspection Commission (UNMOVIC).

The policy of Republican President George H.W. Bush and his successor, the Democrat Bill Clinton, came under pressure during the 1990s. The sanctions proved to have a seriously deleterious effect on the Iraqi population, while scarcely affecting the regime. Pictures of severely malnourished children flashed around the world, and UN agencies began to report alarming figures. For instance, half a million children under the age of five died of malnourishment and related diseases during the first five years of sanctions. In the West and in the Arab world this raised grave doubts about whether the ends justified the means. Growing criticism caused the UN Security Council to adopt Resolution 986 on 14 April 1995, which laid the foundation for the Oil-for-Food Program, under which Baghdad could import food, medicines, and certain other products, under strict UN supervision, to be paid for from oil revenues.

The unintended effect of the programme was that Saddam Hussein’s regime gained new purchasing power, especially when Iraq received permission for unlimited oil exports. This enabled Baghdad to play on the conflicts of interest within the anti-Iraq coalition, between the United States and Great Britain on the one hand and Iraq’s old trading partners France and Russia on the other, as well as international firms.

Through large-scale smuggling of oil, cigarettes, and other things, and by making secret deals with foreign companies that delivered goods as part of the Oil-for-Food Program, Saddam Hussein and his close associates were able to collect large sums of money during the UN-embargo years. These they used to finance luxurious lifestyles and to mobilize new sources of support, including tribal leaders. In the meantime, attempts made in cooperation with the Iraqi opposition to foment a coup through secret operations within the Iraqi power structure came to naught. The outbreak of the Second Intifada in the Israeli–Occupied Palestinian Territories in September 2000 also turned up the heat on the containment policies. The problems there caused many in the Arab world to see Saddam Hussein as a less urgent problem.

All these developments undermined support for the anti-Iraq coalition. With increasing frequency, various prohibitions, such as the no-fly zones, were openly defied, and, by extension, it appeared that Saddam Hussein – who, because of his confrontation with the United States grew into a champion of the Arab street – was about to make his re-entry into regional politics. This forced Washington to revise its Iraq policy.

The first steps towards sharpening the policy were taken while President Clinton was still in office. Under pressure from the neo-conservative forces that were on the rise in the Republican Party, the Iraq Liberation Act made its way through Congress in the autumn of 1998. This law broadened the scope for destabilization activities. Contacts were made and existing contacts intensified with various Iraqi opposition groups, which, in most cases, operated from outside Iraq.

For years, Iraqis had been organizing to oppose the rising power of the central government, which, under the Baath regime and Saddam Hussein’s rule, had  become a nearly totalitarian and brutal police state. Almost all of the parties and organisations that joined together were ethnic or ideological in nature. There were, for instance, the two Kurdish nationalist parties – the Kurdistan Democratic Party (KDP) and the Patriotic Union of Kurdistan (PUK) – and the small Islamic Movement of Iraqi Kurdistan (IMIK), as well as the Assyrian Democratic Movement, the Turkmen National Association, and the Turkmen Front. Among the ideologically oriented parties were the Dawa Party and the Supreme Council for the Islamic Revolution in Iraq (SCIRI), as well as the Iraqi Communist Party, all of which had roots in Iraqi society. Political groups also formed in exile, including the Iraqi National Congress (INC) and the Iraqi National Accord (INA), now named al-Iraqiya.

Because of their mutually exclusive agendas, it appeared impossible for the diverse opposition parties to form a lasting front under the regime of Saddam Hussein. There has also been considerable blood shed between Arabs and Kurds and between Sunni and Shiite Arabs during the past decades. Even during crises such as the war with Iran and the army’s humiliating defeat in Kuwait, the organized opposition did not succeed in forming a coherent front to present itself as a viable alternative to the Iraqi regime. This was reason for the various opposition parties finally to rally, openly or tacitly, behind Washington’s Iraq policy.

After Republican President George W. Bush took office in January 2001, things picked up speed. Neo-conservatives were strongly represented in his government and among his advisors. The unilateral, neo-imperial course in US foreign policy that they advocated set the tone and accelerated after the attacks of 11 September 2001 on the World Trade Center and the Pentagon. Four months later, in his State of the Union address, Bush declared that Iraq, along with the Islamic Republic of Iran and communist North Korea, constituted an Axis of Evil.

At this point the United States, together with Great Britain, began to draft plans to overthrow the regime of Saddam Hussein by military means. Just as in 1990, they sought a mandate from the UN Security Council, claiming that Iraq still possessed weapons of mass destruction and refused to cooperate with the re-established United Nations weapons inspections team. At a later date, the US and the UK made the not very convincing accusation that the Iraqi regime had close contacts with Osama bin Laden’s al-Qaeda network. (After the invasion, US and British investigative committees concluded that the Iraqi regime neither possessed weapons of mass destruction nor maintained links with al-Qaeda.) 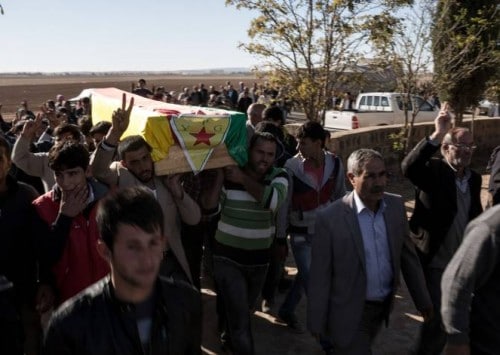 © Copyright Notice
Click on link to view the associated photo/image:
©US Department of State

©US Department of State