Fanack Home / Iraq / Past to Present / The Kingdom of Iraq

The Kingdom of Iraq

The British mandate ended on 3 October 1932, and the Kingdom of Iraq was proclaimed. Behind the scenes, though, power remained in the hands of the British. Formal independence did little to stabilize internal political relationships. New governments followed one another rapidly, and seven military coups took place between 1936 and 1941.

A year after formal independence, King Faysal died. He was succeeded by his son Ghazi, who, after a short and stormy life, died in an car accident in 1939. He was in turn succeeded by his son Faysal II, who was then still a minor; King Faysal II remained under the guardianship of his mother’s brother, Abd al-Ilah, until 1953. The very pro-British Nuri al-Said, who served repeated terms as prime minister, also wielded great influence. In 1941, during World War II, Iraq underwent another military coup, this time by officers who were suspected by London of pro-German sympathies. The British immediately re-occupied Baghdad and Basra, and the new Iraqi government was forced to step down.

In the decades that followed, measures taken by the central government brought far-reaching socio-economic and political changes. For example, on the basis of the Land Settlement Act of 1932, land that until this time had been the collective property of tribes, now came into the possession of the Arab sheikhs and Kurdish aghas (tribal chieftains); as large landowners, they became closely bound to the state. The privatization of land led to a sharpening of the socio-economic differences in rural areas, which in turn sent a massive stream of migrants to the cities. This produced many new problems. The growth of employment could not keep pace with the flood of new residents. The same was true for housing construction and the rest of the urban infrastructure.

Another problem resulted indirectly from participation in education that was encouraged by the authorities. With education, a growing number of Iraqis acquired middle-class status but were unable to develop themselves further, let alone earn an income consistent with that status. The policy served primarily the interests of the large landowners and their British protectors. In 1955 Iraq’s subservience to Great Britain was underscored again, when it joined the anti-Communist and anti-Arab-nationalist Baghdad Pact, an alliance between Great Britain, Iraq, Iran, Turkey, and Pakistan. This all undermined the legitimacy of the rulers, including the monarchy, among much of the population. 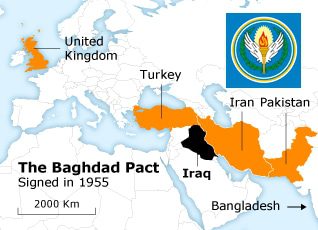