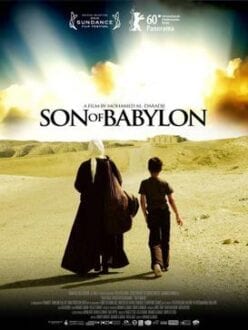 Iraq’s film industry has always been less developed than those of Egypt or Iran. After Saddam Hussein’s rise to power in 1979, the situation worsened: the films that were produced were merely propaganda. Saddam Hussein invited some foreigners to make films, including the Egyptian Salah Abu Seif (1915-1996), who made al-Qadisiya, a period epic on the triumph of the Arabs over the Persians in 636 CE. The six-hour epic al-Ayyam al-Tawila, about Saddam Hussein himself, was shot in 1980 and alledgedly edited by Terence Young. Al-Masala al-Kubra, by the Iraqi Mohammad Shukri Jamil (b. 1937), celebrated the 1920 uprising against the British.
Despite severe Baathist censorship, independent films could be made in Iraq. Faisal al-Yasiri managed to shoot The Sniper (1981) and The Princess and the River (1982). He also established the first Iraqi satellite TV station and was for a while chief editor of al-Jazeera in Baghdad. He now seems to have left the world of cinema altogether.

One of the new Iraqi filmmakers is Oday Rasheed (b. 1973). He is the director of Iraq’s first post-war feature film, Underexposure, a ‘docufictional’ account of a young Baghdadi filmmaker who reports on the lives of his friends and neighbours in the tumultuous days following the US invasion. Variety Magazine wrote that Oday Rasheed had taken the term ‘guerrilla filmmaking’ to a whole new level. Rasheed’s second feature film Qarantina (Quarantine) is about a troubled Baghdad family; it is largely a quiet film about the impact of the long war on Iraq’s people. Rasheed, who has received several prizes for Underexposure, lives most of the time in Berlin.

Mohammed al-Daradji (b. 1978) studied theatre directing in Baghdad and fled to The Netherlands in 1995, where he specialized as a cameraman. He later graduated in cinematography and directing at The Northern Film School in Leeds, UK. One of his first feature films was Ahlam (Baghdad, 2004), shot in Iraq during the war. During filming he and three members of his crew were kidnapped but managed to avoid being killed by insurgents, who accused them of making a propaganda film for the US-backed Iraqi government. After their escape, they were abducted again, from a hospital, by a different group of gunmen, who beat them and then turned them over to the US military, who held them for six days, in harsh conditions, on suspicion of filming insurgent attacks for al-Qaeda. His next film, Son of Babylon (2010), raised some controversy in Iraq, as al-Daradji, an Arab, had chosen Kurdish main characters. In 2011 he released In My Mother’s Arms, a film about an orphanage in Baghdad run by an idealist.

©Son of Babylon
Son of Babylon ©WIKIMEDIA COMMONS
"Ignorance leads to fear, fear leads to hatred, and hatred leads to violence.
This is the equation."
IBN RUSHD/AVERROES (1126 – 1198)
We are a Dutch not for profit organisation (NGO), financed solely by individuals who share our belief in the importance of publishing and disseminating reliable, unbiased information on the Middle East & North Africa region. To represent the voice of the region’s people, we carefully echo the region’s heartbeat by offering fact-checked and therefore credible information.
Your support is greatly appreciated and helpful!
Donate