Fanack Home / Israel / Past to Present / Boycott Against Israel

With no end to the peace process and with a vocal American and European frustration with the right-wing Israeli government, economic boycotts and other measures against Israeli interests are increasingly being used politically not only by Palestinians but also by the international community. For the first time, the American administration is loudly voicing its concerns about the repercussions Israel will face if it does not accept the proposed peace framework that the Obama administration is preparing. Some in Israel believe that it is the Obama administration that has given the green light to the European Union to pressure Israel.

As a result, companies in traditionally pro-Israel states are divesting from Israeli banks and enterprises that do business with and invest in the illegal Jewish settlements in the Palestinian Territories. Vitens, the Netherlands’ largest supplier of drinking water, has, in accord with Dutch and EU discouragement policies, severed ties with the Israeli national water company, Mekorot, which operates in the occupied territories. The decision by Vitens was taken after consultation with the Dutch foreign ministry, but the foreign ministry later denied it had pressured Vitens to end its cooperation with Mekorot.

After the 1948 Arab-Israeli war, the Arab League adopted an official boycott against Israel distinct from the above measures against Israeli companies working in or doing business with illegal settlements. The boycott ended between Egypt and Israel after Anwar Sadat, then president of Egypt, signed a peace treaty with Israel in 1979. In 1993, the Palestinian leader Yasser Arafat ended the boycott by signing the Oslo peace accords and cooperating with Israel on political, security, and economic matters. Jordan followed suit, after King Hussein signed a peace treaty in 1994. Following the Oslo peace accords, the Gulf Cooperation Council (GCC) ended their participation in the boycott against Israel, a move seen as a step toward peace and economic development, but the refusal by Israel to sign the Arab Peace Initiative angered GCC states, especially Saudi Arabia. Protests in Jordan and Egypt have forced both governments to enforce the boycott, but it is still very ambiguous.

The BDS campaign, which was founded in 2005, targets not only the state of Israel and Israeli businesses and investments but also artistic, cultural, and academic activities. The BDS movement and campaign were inspired by the South African model and endorsed by an alliance of more than 170 Palestinian civil-society groups. They advocate the use of economic, political, and academic pressure to force Israel to comply with the goals of the movement, which are: 1) an end to the Israeli occupation of the land occupied after the 1967 war; 2) full equality for the Arab-Palestinian citizens of Israel; and 3) respect for the right of return of the Palestinian refugees. The campaign has recently had some success in Western academic and artistic circles.

Roger Waters of the band Pink Floyd considers Israel an apartheid state, and, in 2013, he refused to perform in Israel. Stephen Hawking, a well known Cambridge University physicist, cancelled his participation in 2013 in one of the most prestigious conferences in Israel. The American Studies Association voted to enforce a boycott of Israeli academic institutions, which caused strong reactions in the US because of the country’s pro-Israel stance.

Israeli leaders accuse organizers and followers of the BDS campaign of demonizing and delegitimizing Israel, with the aim of destroying the state. In June 2013, Israel decided to look seriously at their efforts, but since then it has continued to express its concerns. Israel decided to transfer the BDS dossier from the Foreign Ministry to the Ministry of Strategic Affairs, where the dossier on Iran and its nuclear weapons program also is located.

Many activists believe that Israel’s right-wing parties have indirectly facilitated their work by continually violating the principles of international law, including humanitarian law. 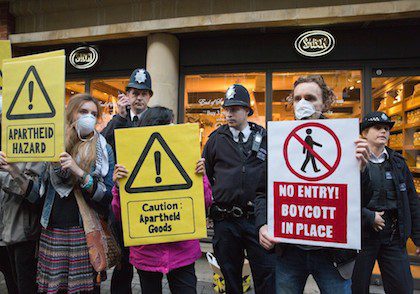 Western Democracies Criminalize Boycott Against Israel
Western Democracies Criminalize Boycott Against Israel
The seemingly intractable conflict between the state of Israel and the Palestinian people continues not only in the streets of Gaza or Jerusalem – but also in the governmental offices and court rooms of the United States, United...

ABBAS MOMANI ©AFP
"Ignorance leads to fear, fear leads to hatred, and hatred leads to violence.
This is the equation."
IBN RUSHD/AVERROES (1126 – 1198)
We are a Dutch not for profit organisation (NGO), financed solely by individuals who share our belief in the importance of publishing and disseminating reliable, unbiased information on the Middle East & North Africa region. To represent the voice of the region’s people, we carefully echo the region’s heartbeat by offering fact-checked and therefore credible information.
Your support is greatly appreciated and helpful!
Donate