On December 23, 2016, Security Council of the United Nations voted on the UN Resolution 2334, which condemned the Israeli settlements that have been occupying Palestinian territories since 1967, including East Jerusalem. The resolution, which passed in a 14-0 vote by members of the UNSC, saw the United States, a bearer of a veto power, abstain from blocking the vote. This is a rare case when it comes to resolutions concerning Israel. The U.S. ambassador to the United Nations, Samantha Power, said that the U.S. abstention was consistent with the U.S. policy on Israeli settlements. She wrote: “It is precisely our commitment to Israel’s security that makes the United States believe that we cannot stand in the way of this resolution as we seek to preserve a chance of attaining our long-standing objective: two states living side-by-side in peace and security.”.

However, critics of the resolution insist that the U.S. decision to abstain was inconsistent with prior U.S. policy especially that of February 2011, when the Obama administration, during its first term in office, vetoed a similar UNSC resolution, which then emboldened the Israelis to substantially increase its settlement activity.

With settlement activity growing, the international community started fearing the eventual collapse of the peace process between the Palestinian and Israelis and the failure of the two state-solution. Hence, the UN’s resolution 2334 stated that the measures utilised by Israel which aimed “at changing the demographic composition and status of Palestinian territories occupied by Israel, including construction and expansion of settlements, transfer of Israeli settlers, confiscation of land, demolition of homes and displacement of Palestinian civilians are in violation of international humanitarian law.” The resolution also condemns “all acts of violence against civilians, especially terrorist acts, provocation and destruction.” This was viewed as being aimed towards Palestinian leaders whom Israel is accusing of using a political rhetoric that encourages attacks against Israeli civilians.

As the resolution 2334 indicates, the dispute dates back to 1967 and the ‘Six-Day War,’ when Israel won control of the Sinai Peninsula and the Gaza Strip from Egypt, seized the East Jerusalem and West Bank from Jordan and the Golan Heights from Syria. Subsequently, an extensive displacement of populations happened due to the loss of territories, with long-term consequences. Around 1967, an estimate of 1 million Palestinians inhabited the West Bank and Gaza. During and directly after the war, an approximate 350,000 either fled or were displaced from their homes by the Israeli military, to neighbouring countries like Jordan.

Following the Israeli victory, Israel proceeded to build settlements, predominantly on lands within areas considered to be the ‘Palestinian territories’ by the international community, which Israel has militarily occupied since the 1967 Six-Day War. Israeli settlements were also built partly on lands considered Syrian territory, which were occupied by Israeli military forces since the aforementioned war, too. These settlements are civilian communities inhabited by Israeli citizens who are almost strictly of Jewish origin.

However, these settlements are illegal under international law. The Geneva Convention relative to the Protection of Civilian Persons in Time of War, which is commonly known as the Fourth Geneva Convention and was adopted in 1949, defines humanitarian protections for civilians in a war zone. In 1993, the UNSC adopted a report from the Secretary-General and a Commission of Experts concluding that the Geneva Conventions had passed into the body of customary international law, hence rendering them binding even on non-signatory states of the conventions, when they engage in armed conflicts. Accordingly, the Convention makes it illegal for nations to move populations and establish settlements in territories acquired in a war. Nevertheless, Israel maintains that its settlements are consistent with international law, arguing that the territories it gained during the 1967 war are not ‘occupied’ but ‘disputed’ territories, because “there were no established sovereigns in the West Bank or Gaza Strip prior to the Six-Day War”. But on July 9, 2004, the International Court of Justice (ICJ) presented its summary of the Advisory Opinion and eventually rejected the argument presented by the state of Israel concerning the building of these settlements, which it judged “contrary to international law.”

Although resolution 2334 contains a repetitive language reminiscent of aforementioned UNSC resolutions 446 and 465, and although it was not binding as it was not adopted under Chapter VII of the U.N. Charter, it still might have significant international legal and political effects. Since 2015, the International Criminal Court in The Hague, Netherlands has already been conducting a preliminary examination of alleged war crimes committed by Israel. This resolution could encourage the Court to continue its investigation with other countries that are also considering punitive sanctions, in case the Netanyahu administration does not halt its construction of new settlements. It seems that the Israeli Prime Minister Benjamin Netanyahu was wrong to assume Israel’s diplomatic standing was on the rise and may have have been over-confident in his assumption that the world was no longer interested in the Palestinian case, which has now been shattered. In retaliation, on December 24, 2016, Prime minister Netanyahu ordered the recall of Israeli ambassadors from New Zealand and Senegal, two of the four countries that took up the draft resolution alongside Venezuela and Malaysia. Israel has no diplomatic relations with Venezuela or Malaysia. Netanyahu declared that nations acting against Israel’s interests will pay a diplomatic and economic price, and instructed the Foreign Ministry to cancel all aid programs to Senegal, which involves programs to alleviate poverty. Israel also cancelled the planned visits of the Senegalese and Ukrainian Foreign Minister to Israel and summoned and reprimanded the ambassadors of the United States and the ten countries which voted in favor of it, an unusual move on Christmas Day that demonstrated Israel’s seriousness in the matter.

During the summond on December 25, 2016, Netanyahu said that “the resolution that was passed by the U.N. yesterday is part of the swan song of the old world that is biased against Israel” and questioned the Security Council’s priorities given the mounting fatalities of the wars in Syria, Sudan, and elsewhere in the Middle East. The Israeli government announced it will not comply with the terms of the resolution, while taking a jab at the U.S. President Barack Obama, accusing him of failure in protecting Israel at the UNSC. Prime minister Netanyahu added that the Israeli government is looking forward to work with President-elect Trump. On the next day, Avigdor Lieberman, Israel’s Defense minister, also urged Jews to leave France and to move to Israel.

Nevertheless, Israeli opposition leader Isaac Herzog responded by accusing Netanyahu of declaring war on the world, and mainly on the United States and Europe. In a letter to the Washington Post, Ehud Barak, Israel’s Prime minister from 1999 to 2001 and Netanyahu’s Defense minister from 2007 to 2013, attacked Netanyahu’s policies of “fear-mongering and victimhood,” He also wrote, that the Israeli Prime minister’s conduct has “undermined Israel’s security.” Barak predicted that Israel will face a gradual reduction in funds for its defense industries, which might take a hit due to Netanyahu’s aggressive nonsensical retaliation.

The Security Council resolution demonstrates that the rest of the world is unwilling to accept Israel’s attempt to legitimise its actions in Palestinian territories. It is clear that Netanyahu is eagerly anticipating U.S. President-elect Donald Trump’s inauguration. But no matter how supportive President Trump will be, Netanyahu’s furious and indiscriminate diplomatic outburst has seemingly contributed to the isolation of Israel from the international community, for some time to come. 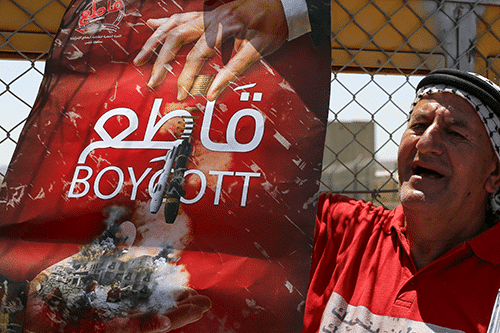 Boycott Against Israel
As a result, companies in traditionally pro-Israel states are divesting from Israeli banks and enterprises that do busin...