During World War II, both Arabs and Jews in the British Mandate fought on the side of the Allies. In 1944, a Jewish Brigade was formed as part of the British 8th Army. The brigade took part in operations in Northern Africa as well as in Europe. Arabs were enlisted in the Arab Legion under the command of the British lieutenant-general John Glubb, also known as Glubb Pasha.

At the same time, Hajj Amin al-Husayni, the mufti of Jerusalem, took part in broadcasts from German soil in which he tried to persuade the Arabs to join the side of the Axis powers. From the Jewish side, the Irgun, the Revisionist Zionist’s underground battle group, together with a small Jewish terrorist group officially called Lehi (Fighters for the Freedom of Israel) but better known as the Stern Gang after its founder Avraham Stern, attacked British targets in and outside of Palestine. In November 1944, members of Lehi in Cairo murdered the British Minister of State Lord Moyne.

World War II had a huge impact on Palestine, just as World War I had huge consequences earlier. The end of World War I had brought an end to the Ottoman Empire’s rule and had led to the British Mandate of Palestine. World War II brought the inconceivable suffering of European Jews, with the murder of circa six million Jews by Nazi Germany (for more information see Yom Hashoah Remembrance Day). The scale of the destruction in Hitler’s extermination camps and the undecided destiny of the survivors put the British government under heavy pressure to allow more European Jews to migrate to Palestine. In August 1945, the United States President Harry Truman, supported by the American Congress, insisted on unrestricted Jewish migration to Palestine. This request signaled the beginning of the United States’ involvement in what was to become ‘the question of Palestine’.

The Americans were not the only nation to become involved. In October 1944, the representatives of five Arab countries – Egypt, Syria, (then) Transjordan, Iraq and Lebanon – met in the Egypt town of Alexandria, where they laid the foundations for the Arab League, officially established in March 1945. In Alexandria an Arab Higher Committee for Palestine was formed. In the Alexandria Protocol the five stated explicitly that ‘Palestine constitutes an important part of the Arab World and that the rights of the Arabs in Palestine cannot be touched without prejudice to peace and stability in the Arab World’. The Committee declared that it was ‘second to none in regretting the woes which have been inflicted upon the Jews of Europe by European dictatorial states’. ‘But the question of these Jews,’ as the Protocol continued, ‘should not be confused with Zionism, for there can be no greater injustice and aggression than solving the problem of the Jews of Europe by (…) inflicting injustice on the Arabs of Palestine of various religions and denominations.’ The Committee was of the opinion ‘that the pledges binding the British Government and providing for the cessation of Jewish immigration, the preservation of Arab lands, and the achievement of independence for Palestine are permanent Arab rights’.

The Arab conference in Alexandria was attended by a prominent Palestinian scholar, Musa al-Alami, son of a former mayor of Jerusalem. He represented all Palestinian political parties, since the Arab leaders had turned themselves against the presence of Hajj Amin al-Husayni, the mufti of Jerusalem, who had compromised himself due to his connections with the German Nazis. 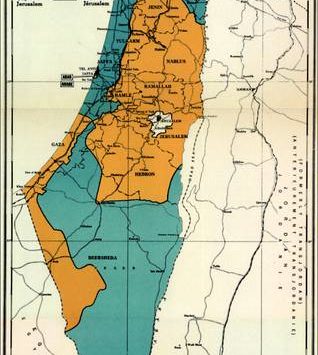 UNGA Resolution 181
The resolution called for a UN Palestine Commission to select and oversee provisional governments for both new states by...