No one is better placed to assess relations between Egypt and Israel than Dr Dore Gold, a Middle East expert and director-general of the Israel Ministry of Foreign Affairs. In an account of Gold’s visit to Cairo in late June 2015, the conservative Israeli newspaper Makor Rishon wrote that he was particularly surprised by Egypt’s willingness to cooperate with Israel in formulating a common strategy to deal with the current political transformations in the region. Gold also said that meetings between the two sides to draft the main items of the strategy have already been scheduled.

Egyptian-Israeli relations have experienced a remarkable shift since the ouster of Muslim Brotherhood leader Mohamed Morsi in July 2013 and the election a year later of General Abdel Fattah el-Sisi. The shift is all the more notable because Egypt has for the past decade not participated in a joint strategy with any of its neighbours, including Arab nations, to surmount similar challenges.

Even senior Israeli officials acknowledge that relations between Cairo and Tel Aviv are the best they have been for some time. General Amos Gilad, director of Political-Military Affairs at the Israeli Ministry of Defence, said during a speech at Israel’s National Security Conference organized by the Interdisciplinary Center Herzliya from 7-9 June, that el-Sisi’s rise to power was “a security miracle” for Israel. On 8 June, Israel Defense magazine quoted Gilad, who is in charge of the Israeli-Egyptian relations dossier, as saying that Israel is reaping the rewards of the war waged by el-Sisi on jihadist groups in the Sinai and of his efforts to stem the flow of resources into the Gaza Strip.

According to Gilad, el- Sisi’s greatest achievement has been destroying smuggling tunnels under the Sinai-Gaza border. Gilad said that 90% of the tunnels have been demolished, minimizing the Palestinian factions’ chances to obtain weapons.

Israel also shows real interest in assisting the Egyptian government in its war on jihadists in the Sinai. Roni Daniel, military commentator for the Israeli television station Channel 2, maintained in an article published on the channel’s website on 2 July that Israel sees the war in Sinai as a common war. He quoted key military sources as saying that Israeli intelligence services provide information to the Egyptian army on the jihadist groups in the peninsula because Israeli decision-makers believe these groups, some of which are linked to Islamic State, will seek to attack Israel if the Egyptian army fails to eliminate them. A day earlier, Israeli daily Yedioth Ahronoth also quoted Israeli military sources as saying that military attacks by the Wilayah Sinai (Sinai Province of the Islamic State) organization during the month of Ramadan indicated that the group has gained extensive experience and is capable of running major military operations. Israel is particularly concerned about the possibility of the group targeting the new Eilat Airport, which has reportedly been moved to another location because any attacks on it would deal a strong blow to Israeli tourism.

However, there are also signs of growing frustration in Israel over the Egyptian army’s slow progress in tackling Islamic State affiliates. The newspaper Yisrael Hume, which is close to the office of Prime Minister Benjamin Netanyahu, on 15 July called on the United States to lead an international military effort to help Egyptian forces battle jihadist groups. Israel also accused Hamas, the Islamist movement that controls the Gaza Strip, of providing military assistance to Wilayah Sinai and of receiving the group’s wounded members at hospitals in the Palestinian territory. On 3 June, Makor Rishon quoted Israeli Intelligence Minister Yisrael Katz as saying that Israel has information confirming the cooperation between Hamas and the jihadist group in the Sinai. Hamas denies any such links.

It is also clear that Israel is taking advantage of the conflict between President el-Sisi and the Muslim Brotherhood. An offshoot of the Muslim Brotherhood, Hamas has seen its relations with Egypt deteriorate since el-Sisi came to power. Israeli journalist Amir Tivon cited senior Israeli officials as saying that el-Sisi’s cooperation with Israel during the latest Israeli war on Gaza deprived Hamas of scoring major achievements. In an investigative report published by the Walla! news website on 9 March 2015, Tivon said that politicians often critical of the Israeli leadership acknowledged that improving ties with Egypt had been Netanyahu’s greatest accomplishment to date.

In a 1 July report published by the left-wing Haaretz newspaper, military affairs commentator Amos Harel argued that Egypt’s generals see Israel as “an important partner” in the war on extremist Islamist groups, adding that the generals “show enthusiasm for cooperation with Israel and feel positively about this”.

However, a strategic partnership between Egypt and Israel goes beyond security and military cooperation to take the form of regional cooperation. For example, an alliance of sorts exists between Egypt, Israel, Greece and Cyprus but explicitly excludes Turkey. On 30 April 2015, Walla! quoted Israeli officials as saying that the common denominator between the four countries is their hostility towards Turkey and their intent to explore the gas fields in the Mediterranean Sea.

The clearest evidence of the thaw in Egyptian-Israeli relations was el-Sisi’s decision in late June to appoint a new Egyptian ambassador to Tel Aviv. The move coincided with Europe’s growing criticism of Israeli settlement activities and Israel’s failure to reach a political settlement over the conflict with the Palestinians as well as escalating efforts by the global Boycott, Divestment and Sanctions campaign to force Israel to end occupation of Palestinian land.

It is hardly surprising, therefore, to see Israel helping el-Sisi’s regime to gain international legitimacy. US and Israeli media have revealed that Israel and the Israel lobby exerted tremendous pressure on both the US administration and Congress not to call el-Sisi’s rise to power a military coup. Israel also convinced the US Senate to back down from its objection to provide Egypt with Apache helicopters to fight jihadists in Sinai. Israel’s intervention to secure US weapons for an Arab country is unprecedented in the history of the region and proof of the dramatic changes that have followed Egypt’s Arab Spring. 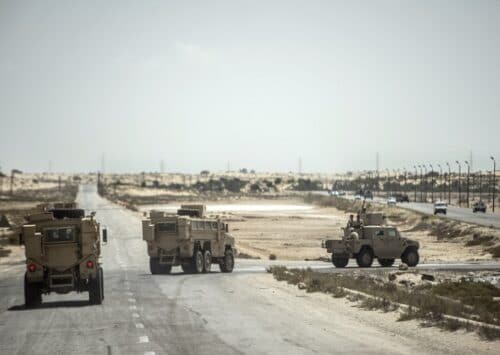 Sinai: A Fertile Breeding Ground for Extremists
Several elements have helped to strengthen the presence of extremist groups in the Sinai Peninsula.