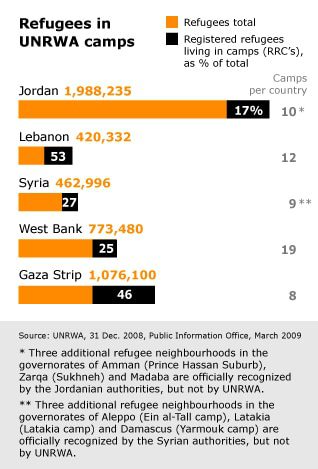 Sixty years after their exodus, the Palestinian refugees constitute the ‘oldest’ and most numerous refugee population in the world. Estimated at over 720,000 in 1949, they represent, together with their descendents, a population of over six million today. Two-thirds of them (4.6 million) are currently registered with the United Nations humanitarian agency especially devoted to catering for their basic needs: the United Nations Relief and Works Agency for the Palestine Refugees in the Middle East (UNRWA). This agency operates in Jordan, Lebanon, Syria, the West Bank and the Gaza Strip.

The right of return (and compensation) of Palestinian refugees, which is sanctioned by international law, has always been regarded by Israel as a major stumbling block in the negotiations with the PLO since ‘Oslo‘.

Israel - Palestine - Past to Present