Fanack Home / Israel / Past to Present / The blind ally / The Wall 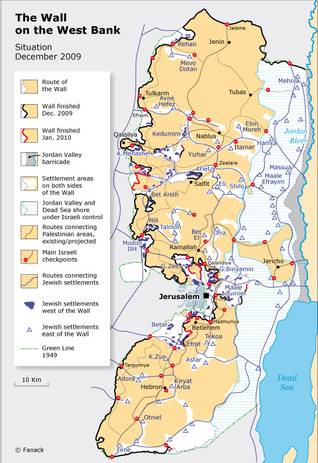 In April 2002, the Israeli government decided to erect a 700 kilometre long Wall in the West Bank in order to halt Palestinian infiltration. Israel justified the construction of the barrier through its right of self-defence (see also International Law and the Wall). In a report to the General Assembly of the United Nations, the Secretary General described the planned route and the character of what he called the Wall, which would consist partly of a system of fences with electronic sensors, ditches, patrol roads and coils of barbed wire, and partly of concrete walls, in particular in areas where Palestinian population centres border Israel territory, such as Qalqiliya, Tulkarm, and parts of Jerusalem. He further noted that much of the barrier as planned or already completed deviated from the Green Line (the armistice lines of 1949) and incorporated Israeli settlements on the West Bank and/or created Palestinian enclaves. He also described the humanitarian and socio-economic consequences for the population of the Occupied Palestinian Territories. In particular, he described the situation of Palestinians living in the enclaves as ‘extremely harsh’, as they were often separated from their agricultural land or from their markets and services, access to which was seriously hampered. The Secretary General fully acknowledged that Israel has the right and duty to protect its people against terrorist attacks, but was of the view that this duty should not be carried out in a manner that is in contradiction with international law and that could damage the longer term prospects for peace.

In December 2003, the United Nations General Assembly decided to request the International Court of Justice (ICJ) in The Hague to ‘urgently render an advisory opinion on the question  what the legal consequences are, arising from the construction of the wall being built by Israel, the occupying Power, in the Occupied Palestinian Territory, including in and around East Jerusalem’.

On 9 July 2004, the ICJ concluded that ‘the construction of the wall, and its associated regime, are contrary to international law’. In answering the question put by the UN General Assembly, namely what the legal consequences are of the violation by Israel of its legal obligations, the Court found, first, that Israel must immediately cease the construction of the Wall and ‘repeal or render ineffective all measures taken which unlawfully restrict or impede the exercise of the rights of the inhabitants of the West Bank’, and, secondly, Israel was found to be under an obligation to make reparation for all damage caused.

According to a report of the UN Secretary-General of 6 November 2009 the Wall had, at that time, been extended by approximately 200 kilometres since the advisory opinion of the ICJ was issued, with 58 percent of the planned (709 kilometres) route at that moment constructed. According to that same report, after its finalization about 85 percent of the Wall would be in the West Bank and not along the Green Line.

Fanack offers a special file on the International Law and the Israeli Wall.

International Law and the Wall 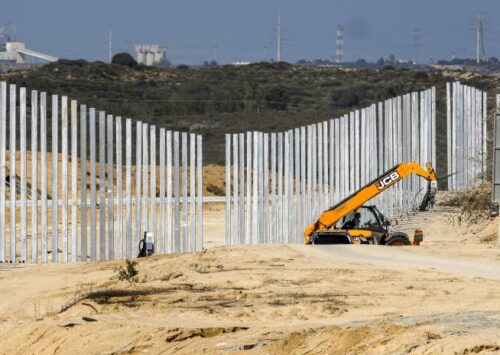 Israel’s New Separation Barrier: Isolating Gaza from the West Bank for Good?
Approval for the construction of the Gaza fence is thus a response both to a perceived security threat and to complaints...