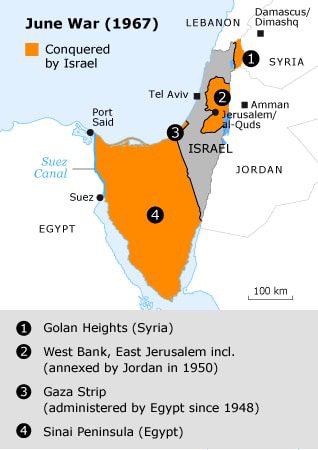 The consequences of the June War of 1967 were immense, both in their immediate effects as well as in the long term. In the course of the war, the last remnants of the former Mandate of Palestine had been occupied by Israel: the West Bank, including East Jerusalem, and the Gaza Strip. In addition, Israel took control of the Sinai Peninsula (from Egypt) and the Golan Heights (from Syria).

On the frontline along the Suez Canal a static artillery battle between Egyptian and Israeli troops began in March 1969 and lasted with interruptions until August 1970: the so-called War of Attrition. The intervention of the Soviet Union, which restored the Egyptian defences not only with state-of-the-art surface-to-air missiles, but also with technicians and Soviet fighter pilots, ended this ‘war-after-the-war’.

But the consequences of the war on the diplomatic front have lasted to this day. At the end of August 1967, the Arab States, with the exception of Syria, attended a conference of the Arab League in Khartoum, Sudan. The participants unanimously adopted a resolution in which it was stated that ‘the main principles by which the Arab states abide’ should be ‘no peace with Israel, no recognition of Israel, no negotiations with it, and insistence of the rights of the Palestinian people to their own country’.

On 22 November 1967, the UN Security Council passed Resolution 242, which has since remained the formal basis of negotiations. The resolution, negotiated between the United States and the Soviet Union, urged Israel to withdraw its armed forces ‘from (the) territories occupied in the recent conflict’. It also urged the ‘termination of all claims or states of belligerency and respect for, and acknowledgement of the sovereignty, territorial integrity and political independence of every State in the area and their right to live in peace within secure and recognized boundaries’. Controversy arose over differences in the wording of the English and French versions of ‘242’. The French text speaks of ‘des territoires occupés’, meaning ‘the occupied territories’ as well as ‘occupied territories’. The English text reads: ‘withdrawal (…) from territories occupied in the recent conflict’. As of yet, the resolution has not been implemented (see also Resolution 242 in Negotiations). 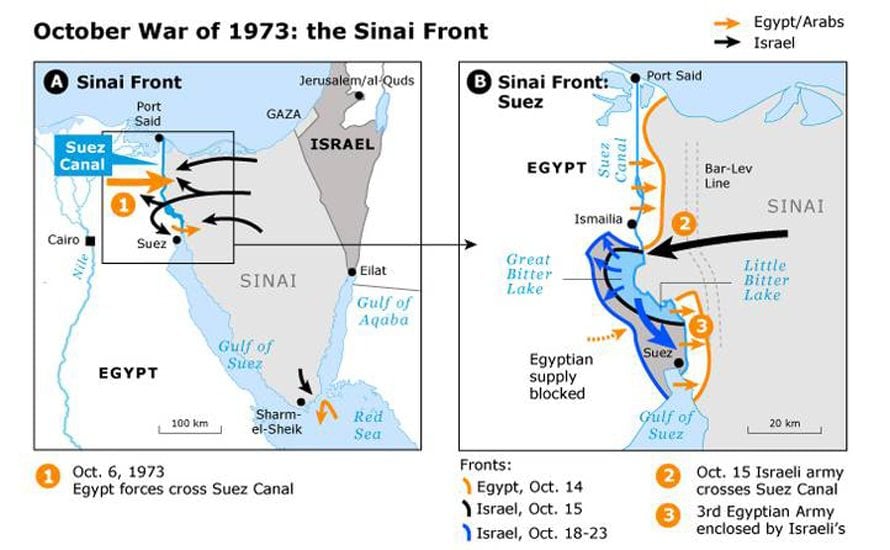 The October War of 1973
In 1970s, the Arab-Israeli conflict became more and more intertwined with the Cold War. The Soviet Union strengthened it...