Almost immediately after the vote on the United Nations Partition Plan (see UN General Assembly Resolution 181), hostilities broke out between Palestinians and Jews in Palestine. The Zionists tried to muster as many immigrants as possible and mobilized their armed forces. Shootings and attacks on Palestinians and Jews, on armed men and civilians, increased in frequency. The scale of these clashes also increased. Palestinian forces sought to isolate Jewish villages and towns by cutting off roads leading to them and attacking convoys with supplies and personnel.

At the time, the Haganah, the largest Jewish military organization, consisted of some 35,000 armed men and women. In addition, there were several thousand fighters belonging to other groups who had been operating in the shadows. This Jewish ‘army’ was only lightly armed and barely trained, but was shored up by men who had previously fought with the British army.

The opposing Palestinian Arab forces consisted of loosely organized militia in Palestine itself, with an estimated strength of some 10,000 men. Their ranks were reinforced by 3,000 volunteers from the surrounding Arab countries, summoned by the Arab League.

In March 1948, the United Nations Palestine Commission announced that it was unable to establish the requested Jewish and Palestinian provisional governments as a result of the continued fighting. The United States had made it clear beforehand that it would oppose any implementation of the partition by force. Later in March, Washington called for a truce in Palestine and proposed to refer the question back to the UN General Assembly.

Fearing a change in American policy, the Haganah launched a two-pronged offensive, one in the direction of the seaport of Haifa, used by the British to evacuate their troops from Palestine. The offensives coincided with the attack by the Irgun and the Stern Gang on the Palestinian village of Deir Yassin, near Jerusalem, on 9 April 1948, in which more than a hundred villagers perished, among whom women, children and unarmed men. (It turned out to be one in a series of massacres of Palestinian civilians by Jewish armed groups.) Four days later, a Jewish convoy to the Hadassah Hospital on Mount Scopus in Jerusalem was attacked by Arab/Palestinian forces. The number of deaths on Jewish side in this attack was 79, most of whom civilians. 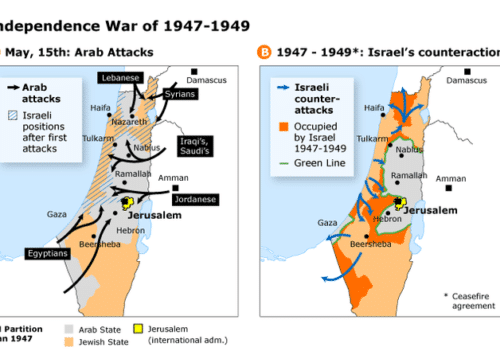