On 14 May 1948, the last British High Commissioner, General Alan Cunningham, left Palestine in accordance with Great Britain’s pledge. At about the same time, David Ben-Gurion, the chairman of the Jewish Agency Executive, read out the Declaration of the Establishment of the State of Israel in the Tel Aviv Museum (today the Eretz Israel Museum, see Independence Hall), which was signed by 37 members of the Provisional Council of State.

The declaration linked the establishment of a Jewish state directly to ‘the catastrophe which recently befell the Jewish people – the massacre of millions of Jews in Europe’ as ‘another clear demonstration of the urgency of solving the problem of its homelessness’, and referred to Resolution 181 of the United Nations General Assembly of 29 November 1947, which according to the declaration ‘required the inhabitants of Eretz Israel to take such steps as were necessary on their part for the implementation of that resolution’. ‘This recognition by the United Nations of the right of the Jewish people to establish their State is irrevocable. This right is the natural right of the Jewish people to be masters of their own fate, like all other nations, in their own sovereign State.’

On the same day, the United States recognized the new state, followed three days later by the Soviet Union. In the early morning of May 15, regular armed forces of Syria, Iraq, Egypt and Transjordan crossed the borders of Palestine. War had broken out. 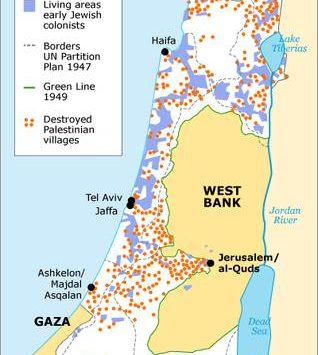 al-Nakba
ne thing was clear: the Palestinian community in Palestine had ceased to exist as a social, economical and political en...

Please contact us in case of omissions concerning copyright-protected work. The acquired copyright protected images used on/as featured image of this page are: ©The Palestine Post