Although modern-day Israel was only formed in 1948, the emergence of Hebrew newspapers in the region go back almost a century before that. In 1863, prominent Jewish businessmen established the first Hebrew publication, Halevanon, in Jerusalem, followed by Havazzelet six months later. The Ottoman leadership subsequently shut down both publications, but Havazzelet reopened in 1870 and continued as a weekly newspaper until 1911. The first Hebrew daily, Haheruth, opened in 1908 but had ceased publication by the end of WWI.

Before and during the British Mandate of Palestine (1920-1948), several print and broadcast developments occurred that would form the basis of the modern Israeli mass media. Daily newspapers with an ardent political and social agenda began to emerge, such as the liberal, pro-Zionist Haaretz in 1919, the labour and trade union-focused Davar in 1925 and the right-wing, Zionist Haboker in 1935. These publications were restricted by British authorities to 24 pages per week, or four per day. The first Zionist radio broadcast transmission took place in 1932, but regular programming only became possible with the establishment of the Palestinian Broadcast Service in 1936. The British authorities initially saw radio broadcasting as a means of easing rising tensions between Zionist settlers and Palestinians, but the Hebrew broadcasts were often explicitly nationalistic and inflammatory.

Following the creation of the state of Israel in 1948, a previously underground Hagenah radio station broadcasting out of Tel Aviv was renamed Kol Yisrael and established as the country’s public radio service. Emergency regulations, enacted by the British authorities in 1945, were incorporated into Israeli legislation, granting the state powers to censor published content and close down media outlets. Although entirely privately owned, the Israeli press was largely supportive of the government and remained so until the 1980s, when regional events sparked an upsurge in domestic criticism.

Television broadcasts began in Israel in 1966 and continued to air in black and white until the beginning of the 1980s. For nearly 25 years, Israel had only one television channel, which was state owned, but multichannel programming was introduced in the early 1990s in response to the country’s plethora of illegal cable TV networks and private satellite dishes. In 1990, the state created the Second Israeli Broadcasting Authority, with the remit to license and regulate newly established private television and radio outlets.

Israel was one of the first countries in the world to embrace the internet, with the .il country code domain name being the third registered in 1985 after the United Stated and United Kingdom. Academic institutions had internet access as of 1990, while in 1994 private individuals could obtain home access with the establishment of three Israeli internet service providers.

Israel’s 21st-century media landscape is relatively free and pluralistic by regional standards. However, emergency regulations remain in place, granting the Israeli army the power to enact military censorship and impose press injunctions on certain information. Ongoing conflict and tensions with the Palestine territories have also led to heightened security measures at the expense of media freedom.

The media environment is also evolving due to economic pressures. In 2014, the Knesset (parliament) approved a bill to replace the financially unstable state broadcaster, the Israeli Broadcasting Authority (IBA), with a new corporation that would purportedly enjoy greater exemption from government oversight and less direct intervention from politicians. However, Prime Minister Benjamin Netanyahu has since been a vocal opponent of the bill and the new broadcaster’s proposed powers, and in March 2017 threatened to dissolve parliament unless the reforms were cancelled.

Israel ranks 101st in Reporters Without Borders’ 2016 World Press Freedom Index. The country’s Basic Laws serve as its constitutional foundation, and although specific Basic Law legislation addressing freedom of expression and association has been proposed, it has yet to be approved by the Knesset. Nevertheless, human rights watchdog Freedom House observes that Israel’s legal environment and Supreme Court is ‘predominantly protective of media freedom’, with court recognition of journalistic privilege and freedom of information. There are several exceptions, however, including the emergency regulations outlawing hate speech and incitement to violence that are occasionally subjectively applied to media outlets. In 2012, Israel also passed a bill outlawing domestic calls for boycotts of Israeli products.

Press regulation requirements provide the Israeli state with an additional level of control over press and broadcast content. Israeli publishers require a licence from the Interior Ministry to establish a newspaper, while the Government Press Office (GPO) stipulates that all journalists operating in the country require accreditation, which has occasionally been refused for national security reasons. The Israeli army can also shut down any media outlet for national security reasons, although this power has been curbed by a 1996 censorship agreement between the Israeli army and the press. Finally, from 2015 onwards, Netanyahu also served as head of the Communications Ministry, allowing him to regulate the Israeli broadcast market. In February 2017, he announced he would relinquish this responsibility.

Israel also holds a high number of Palestinian journalists in custody under its emergency regulations. The Palestinian Journalists’ Union alleged in 2016 that 19 Palestinian journalists were being held in administrative detention, and that one had been held for more than 20 years. In January 2017, a further journalist, Muhammad al-Kiq, was arrested by Israeli security forces following a demonstration in Ramallah in the West Bank. Al-Kiq was detained without charge and subsequently went on hunger strike, which ended in March after Israel agreed to his release the following month. Al-Kiq had previously been arrested by Israeli authorities a year earlier, and was released in May 2016, following a three-month hunger strike.

At particularly heightened times of Israeli-Palestinian tension, foreign media outlets have complained of a hostile working atmosphere. Covering the 2014 Israel-Gaza conflict, journalists from the BBC, CNN, and al-Jazeera reported physical and psychological intimidation by the Israeli authorities.

At present, Israel’s online media environment is relatively open, but in 2016, the Justice Ministry began drafting legislation that would enable the authorities to remove social media posts deemed to incite terrorism. The legislation still requires parliamentary approval, but if passed it would theoretically afford Israel a widespread online censorship and surveillance remit.

The most notable television channels in Israel are as follows:

Radio remains a popular news and entertainment medium in Israel and an environment in which there is strong competition among public, commercial and private radio outlets. Some of the most significant stations include:

As with elsewhere around the world, the Israeli print newspaper market is declining in popularity. However, it remains an important source of news and is home to some of the country’s oldest media outlets. All Israeli newspapers are privately owned. The most popular are:

With its relatively high internet penetration, Israel has a vibrant social media community. Social networks, particularly at times of heightened unrest between Israel and Palestine, can become heated with passionate and inflammatory posts from citizens and public figures alike.

In 2013, Facebook estimated that it had 4 million Israeli users, 60 per cent of whom use the network on a daily basis. However, the website has been the subject of controversy as many citizens have voiced concerns about the number of Facebook pages inciting violence against Jews and Israelis, prompting the vandalization of Facebook’s Tel Aviv headquarters in 2015. The network has also been used as a discriminatory platform by Israelis themselves, with Avigdor Lieberman, then foreign minister, using his Facebook page in 2014 to call for a boycott of Arab-owned businesses in Israel that had expressed solidarity with the people of Gaza.

Twitter is significantly less popular in Israel, with 2013 estimates suggesting there were only 150,000 registered Israeli users. However, it remains an important source of news in the country and as such is closely monitored by the authorities. In 2016, Twitter agreed to block a tweet, sent from a US-based account, from Israeli IP addresses because it contained information about an alleged sexual assault by a senior figure in the Israeli Justice Ministry. The story had been subject to a government gag order.

In October 2015, the Israeli Foreign Ministry wrote to YouTube asking for the social network to take down several videos that it considered to be encouraging Palestinian attacks. The following month, Tzipi Hotovely, the deputy foreign minister, met with representatives from YouTube and Google to discuss mechanisms to prevent the publication of ‘inflammatory material’ originating in the Palestinian territories.

As print newspapers face declining circulation and revenue, online publications continue to emerge in Israel. A selection of the most notable websites includes: 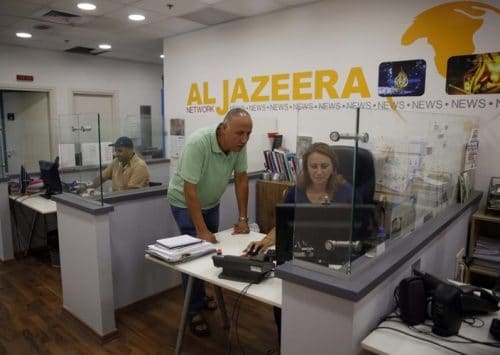 PAVEL WOLBERG ©Hollandse Hoogte
PAVEL WOLBERG ©Hollandse Hoogte
©Channel 2
©Channel 10
©Radio Arutz Sheva
©Haaretz
©Ynet
"Ignorance leads to fear, fear leads to hatred, and hatred leads to violence.
This is the equation."
IBN RUSHD/AVERROES (1126 – 1198)
We are a Dutch not for profit organisation (NGO), financed solely by individuals who share our belief in the importance of publishing and disseminating reliable, unbiased information on the Middle East & North Africa region. To represent the voice of the region’s people, we carefully echo the region’s heartbeat by offering fact-checked and therefore credible information.
Your support is greatly appreciated and helpful!
Donate