In July 1956 Egypt’s nationalist leader, Gamal Abdel Nasser, nationalized the Suez Canal, leading to an invasion in October by Britain, France, and Israel. Hussein refused Britain permission to use its military bases in Aqaba, Maan, Mafraq, and Amman in its operations against Egypt. US pressure forced the aggressors to withdraw, but the attack infuriated an Arab world already in nationalist ferment, and Nasser emerged more popular than ever. A Jordanian general election was held on 21 October 1956, just a week before the attack on Egypt, and nationalists and communists emerged as the biggest winners. Sulayman al-Nabulsi, the leader of the largest nationalist grouping, the National-Socialist Front, was appointed Prime Minister. In response to Suez, the new government severed diplomatic relations with France and resolved to abrogate the Anglo-Jordanian Treaty of 1946. The treaty was terminated by mutual agreement on 14 March 1957.

At the same time, however, Hussein was moving to replace British sponsorship with American. In early 1957 President Eisenhower had proclaimed his ‘doctrine’ that called for US backing for Middle Eastern regimes threatened by  ‘international communism’. The King’s political pronouncements adopted an increasingly Cold-War tone. In spring 1957 al-Nabulsi’s government announced plans to recognize Communist China and establish full relations with Moscow. With the King courting Washington and railing against communism, the stage was set for a collision. In April, suspecting a plot against him by the military, King Hussein dismissed al-Nabulsi. Immediately afterwards – according to his own account, which is disputed by other participants – he personally intervened to quash a rebellion at Jordan’s main army base, in Zarqa, near Amman.

Within days, a Syrian armoured column that had been deployed in northern Jordan to support the kingdom during the Suez Crisis surrounded Irbid. A ‘Patriotic Congress’ of nationalists and leftists convened in Nablus, in the West Bank, and called for a union of Syria and Egypt, the reinstatement of dismissed army officers, and a general strike. Nearby in the Mediterranean, meanwhile, the US Sixth Fleet was steaming east in response to a plea for help from Lebanese President Camille Chamoun, who was embroiled in his own crisis with leftists and nationalists, and Eisenhower declared his commitment to the ‘independence and integrity of Jordan’.

With the King’s opponents and supporters mobilizing in the streets, Hussein took decisive action. Early on 25 April 1957 he placed Jerusalem, Amman, Irbid, Ramallah, and Nablus under curfew, arrested several hundred people, including army officers, banned political parties, and closed opposition publications. To underline its support for the King, Washington agreed a grant of USD 10 million, the first of many.

In February 1958 his two arch-enemies, Syria and Egypt, merged to form the United Arab Republic. The same month Jordan and its fellow Hashemite kingdom, Iraq, countered by forming an Arab Federation. On 14 July 1958, however, Iraq’s monarchy was toppled in a military coup. Within days US marines landed in Lebanon to safeguard Chamoun’s regime, and British paratroopers flew to Jordan to guarantee Hussein’s.

The regime continued to be troubled by its radical neighbours and its domestic opposition, but the combination of repression and the US-UK security umbrella ensured that no threat emerged serious enough to threaten its survival – at least until the late 1960s. 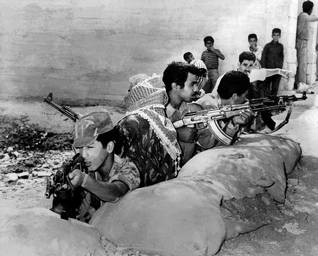