From Ancient History to the Ottoman Defeat in World War I

The first inhabitants of the territory that would become Jordan lived there in the Paleolithic period (500,000-17,000 BCE), leaving behind tools of flint and basalt. Some settled agriculture developed in the Neolithic period (8,500-4,500 BCE), although hunting probably remained the dominant economic activity.

In the Chalcolithic period (4,500-3,200 BCE) Jordan’s residents made axes, arrowheads, and other implements from copper, and substantial hilltop villages and towns developed. In the wetter western and northern highlands, barley, dates, and lentils were cultivated and goats and sheep raised, and hunting was a secondary activity. In the desert to the south and east, lifestyles were probably similar to those of today’s Bedouin.

For reasons that are uncertain but probably linked to climatic and security factors, larger, fortified hilltop settlements were abandoned in 2,300-1,950 BCE for smaller unfortified villages or for pastoralism.

During the Middle Bronze Age (1950-1550 BCE) the region found itself astride increasingly important trade routes between Syria, Egypt, and the Arabian Peninsula. Substantial settlements developed in central and northern Jordan, using bronze weapons and implements, while the south continued to be the domain of nomadic pastoralists.

During the Iron Age the territory of modern Jordan was divided among three kingdoms: Ammon, whose capital, Rabbath Ammon, is the present Amman; Moab, to the south, centred in Kir, the present Karak; and Edom, south of Moab, with its capital in Bozra, in the present-day governorate of Tafila. Subsequently, the territory of southern Jordan formed the heart of the Nabataean kingdom, with its capital at Petra. At the height of its power, Nabataea’s territories stretched from Yemen to Damascus and from western Iraq to the Sinai Peninsula.

During the Byzantine (Greco-Roman) period, which began in 330 CE with the establishment of Byzantium (Constantinople) as the capital of the Eastern Roman Empire, Nabataea was bordered on the north by the Decapolis, a group of ten cities that included Gerasa (modern Jerash), Philadelphia (Amman), Raphana (Abila), Dion (Capitolias), Gadara (Umm Qais) and Pella (Irbid). To the west, it was bordered by Judea, Samaria, Galilee, and Paraea, and to the southwest by Egypt. The kingdom’s eastern border lay in the desert. Nabataea was long a client state of the Roman Empire but was not formally annexed by Rome until 106 CE. 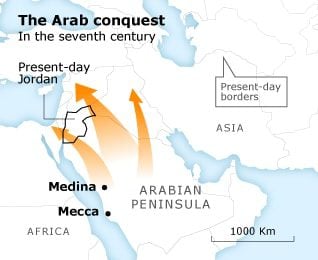 In 629 CE an Arab Islamic army clashed with the Byzantines at Muta, in southern Jordan. Initially, the Arabs were repulsed, but in 636 they triumphed over the Byzantines at the battle of Yarmouk and went on to seize Damascus and the rest of Syria. From 661 to 750 Damascus was the capital of the Umayyad empire, of whose territories Jordan formed a part.

Petra prospered from its location on the main route from Damascus to the heart of the empire in Mecca. In 750, however, the Abbasid dynasty, based in Baghdad, prevailed over the Umayyads. The territory of Jordan – and Petra – were sidelined. 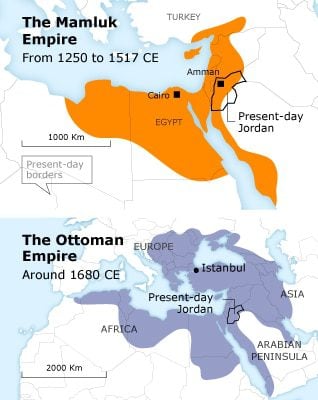 In the early 12th century the crusaders invaded, consolidating their rule by building massive fortresses, of which the most impressive was at Karak.

Gradually, and especially after Saladin became their leader in 1174, the Muslims regained their lost territories. Jerusalem fell in 1187, and crusader power was confined to the shores of the eastern Mediterranean, whence they were finally expelled in the 13th century.

Jordan was a marginal territory in the Cairo-based Ayyubid empire (established by Saladin). In 1258 the Mongols sacked Baghdad, and in 1260 they captured Aleppo and moved south into Syria, Jordan, and Palestine. The same year, however, they were driven back by the Cairo-based Mamluks, the successors to the Ayyubids.

Mamluk rule ended in 1517, with their defeat by the Ottoman Turks in the Battle of Ridaniya, near Cairo. Syria, Jordan, Palestine, and the western Arabian Peninsula were incorporated into the Constantinople-based Ottoman Empire. For the subsequent four hundred years of Ottoman rule, Jordan remained an essentially marginal territory, reflecting its location on the edges of the desert. For the Ottomans, Jordan’s main significance was that it lay on the route of the annual Hadj pilgrimage from Damascus to Mecca. The Ottoman administration was generally weak, and the territory’s population slowly declined. 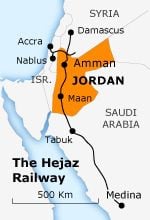 A notable development was the construction in 1900-1908 of the Hejaz Railway, a 1,320-kilometre narrow-gauge line linking Damascus and Medina. Ostensibly, the project was intended to facilitate the Hadj, but it also played a critical strategic role as an imperial artery, supplying Turkish garrisons and outposts in southern Jordan and the Hejaz, the mountainous western region of the Arabian Peninsula, where the Ottomans’ grip was weak.

The Ottoman Defeat in World War I

Modern Jordan resulted from the Ottoman Empire’s defeat in World War I. Keen to secure Arab support against the Ottomans, the British offered their support to a nationalist movement that was stirring in the Ottoman Empire’s Arab territories. In 1915-1916 London negotiated with Sharif Husayn ibn Ali, the ruler of Islam’s holiest city of Mecca, a Hashemite (a member of the Prophet Muhammad’s branch of the Quraysh tribe), and a direct descendant of the Prophet. In exchange for an Arab rebellion against the Turks, the British agreed to recognize the independence of the Arab territories of the Ottoman Empire, within certain limits. Britain also stipulated that Arab independence would apply only where it did not conflict with the interests of its wartime ally, France.

In June 1916 Sharif Husayn launched the Arab Revolt, with logistical support from the British (including T.E. Lawrence, ‘Lawrence of Arabia’). Having taken control of the Hejaz the rebels, commanded by Husayn’s third son, the emir (prince) Faysal, moved into Greater Syria, where they operated in tandem with a British army that had invaded Palestine along the coast, from Egypt. Faysal took Aqaba, at the head of the Red Sea, in July 1917, and Amman, then little more than a large village, in September. Jerusalem fell to the British three months later, and in October 1918 Damascus was taken.

While urging the Arabs to rebel with promises of independence, London was quietly negotiating a conflicting deal with France and Russia. Concluded in May 1916, the Sykes-Picot Agreement divided the region into French and British spheres of influence. The French were allocated a zone corresponding roughly to modern Lebanon, Syria, and northern Iraq, while the British were allocated a zone corresponding to modern Israel, Palestine, Jordan, and southern Iraq. Jerusalem and part of Palestine were designated for international administration in recognition of their religious significance.

On 2 November 1917, meanwhile, following negotiations with the Zionist movement, London issued the Balfour Declaration, which affirmed that the British viewed ‘with favour the establishment in Palestine of a National Home for the Jewish people’. In September 1918 supporters of the Arab Revolt declared an Arab government headed by Sharif Husayn’s son Faysal,even though Britain remained the real power in Syria.

The 1919 Paris Peace Conference agreed that the former possessions of the defeated Germans and Ottomans would be administered as mandates, under the supervision of a new international body, the League of Nations. It was resolved that France should have a mandate for Syria (including what is now Lebanon), while Britain should have Palestine (including present-day Jordan) and Iraq.

To pre-empt French action, a General Syrian Congress of nationalist figures convened in Damascus in March 1920 and elected Faysal king of a united Syria, that is, of the territory today encompassing Syria, Lebanon, Israel, Palestine, and Jordan. Twenty-nine Iraqis present proclaimed Faysal’s elder brother, Abdullah, king of an independent Iraq. They were vain gestures. To formalize what had already been agreed in Paris, Britain and France hastily convened a meeting at San Remo of the Supreme Council of the League of Nations. On 5 May 1920 this granted France mandates over Syria and Lebanon and Britain mandates over Palestine and Iraq. Transjordan, the territory east of the Jordan river, was not explicitly mentioned, but, as it formed part of the Sykes-Picot Treaty’s zone of British influence, it was understood to form part of the Palestine mandate. French troops moved into Syria from Lebanon and occupied Damascus in July 1920. Faysal was forced into exile, although the British installed him as King of Iraq the following year. 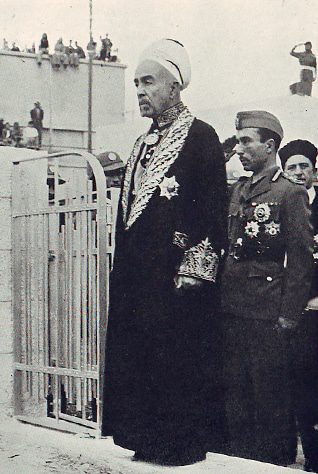 Creation of Transjordan
In March 1921 Abdullah moved north to Amman. That month a conference of British officials in Cairo resolved that Abdulla...