Fanack Home / Jordan / Past to Present / Islamist Movements in Jordan: Between Extremism and Moderation

Islamist Movements in Jordan: Between Extremism and Moderation

One of the most important Islamic movements in Jordan is the Muslim Brotherhood, which opened its offices in 1954, with the blessings of King Hussein. In 1992, after the issuance of the law of parties, the Muslim Brotherhood established a party called the Islamic Labour Front. The first split occurred with the emergence of the Islamic Liberation Party, which was established by Taqiuddin al-Nabhani in the mid 1950s.

In 1989, 22 members of the Muslim Brotherhood movement were elected as members of parliament. They also had five cabinet members in the 1991 government. They refrained, however, from participating in the elections of 1997 in order to protest the government’s signing a peace treaty with Israel in 1994.

The next most important Islamic movement is the “jihadist Salafi” tendency, which was established in the early 1990s and believes in armed confrontation. Among its best-known leaders are Abu Muhammad al-Maqdisi, the Palestinian Abu Qatada, and Abu Musab al-Zarqawi , who led a brutal fight in Iraq as leader of al-Qaeda-in-Iraq, beginning in 2003. Al-Zarqawi became an activist as a member of an extremist group called Bayaat al-Imam. He claimed responsibility for the attack on the UN building in Baghdad in 2003 and the attack on three hotels in the Jordanian capital in 2005, which killed 57 people and injured more than 115. Al-Zarqawi was killed in an air raid by US forces in 2006.

Relations between the Islamic movements in Jordan, represented by the Muslim Brotherhood, on the one hand and the Jordanian political system on the other hand were relatively harmonious because of the challenges of the Cold War and the need for both sides to confront the expansion of communism, the Baathist movement, and the Nasserist movement, as well as the rise of the Palestinian resistance as an independent movement.

But relations cooled on account of the involvement of the Islamic movements in armed struggle and the emergence in 1987 of Hamas, which had a great effect on the Islamic rhetoric to comply with the salafi and jihadist movements and was influenced by a younger generation that had not experienced the benefits of coexistence and harmony.

Most Jordanians are moderate in their politics, religion, and culture. This has discouraged extremism and prevented the spread of extreme ideology through politics or any intellectual  and national positions.

Support for extremist Islamic movements among the general public in Jordan has declined, according to an American public-opinion poll conducted in 2013, which showed that 62% of Jordanians were increasingly concerned about the rise of Islamic extremism in their country. Support for suicide attacks declined to 15%, compared with 57% before the attacks of 2005.

Several researchers specializing in Jordanian affairs believe that Islamic movements, especially those with extremist tendencies, pose a threat to the future of the political establishment in Jordan. To combat such a development, the government should provide more support to the military and security forces and enact additional democratic policies, as well as providing more economic development, creating opportunities for investments, and fighting corruption. Social and economic deprivation and feelings of humiliation create an environment in which extremism thrives.

The political role of Islamic movements represented by the Muslim Brotherhood gained momentum in Jordan after the beginning of the Arab Spring in 2011, reaping the benefits of the success achieved in nearby countries, especially Egypt. They organized protests and marches calling for political and economical improvements, for the liberation of al-Aqsa Mosque and the Holy land, and for disengagement from the treaty signed by the Jordanian regime with Israel in 1994. However, this role has declined again, after the military coup against the regime of the Muslim Brotherhood in Egypt.

Jordan faces several challenges, most importantly the indirect effect of the civil war in Syria, which burdens Jordan financially with the presence of hundreds of thousands of Syrian refugees.

The existence of armed militias in Syria, such as the Nusra Front and  the Islamic State in Iraq and al-Sham (ISIS, now called the Islamic State), presents a real threat to Jordan because of Jordan’s long borders with Syria and Iraq, large parts of which have been under the control of these Islamic groups. (ISIS is, in fact, the continuation of Zarqawi’s al-Qaeda-in-Iraq.)

The recent victories by ISIS/IS in Iraq and Syria may encourage it to spread its activities to other areas, such as Jordan, Gaza, Sinai, and Lebanon. The group has made several threats to target Jordan as a new front in the war to expand its territories.

After IS announced its new caliphate in June of 2014, groups of Salafists organized protests in the city of Maan in southern Jordan in support of the newly formed Islamic State. The demonstrators demanded the elimination of the borders that were established after World War I.

Jordanian authorities began a campaign of arrests, kept a watchful eye on anyone suspected of ties with IS, and mobilized additional military forces to guard its borders with Iraq, including deploying its air force in a clear threat to IS that Jordan would retaliate in the event that IS crossed into Jordan.

The government also announced that is it keeping close track of any of its citizens who support the new Islamic State and declared that any information or opinions shared on the Internet or published by any other means would be dealt with swiftly, because such activities are considered terrorist enterprises.

The Jordanian authorities continue to remind citizens that Jordan is far from all these clashes, confrontations, and threats. Such declarations were supported by many US politicians, who pledged support and protection to Jordan against any incursion by ISIS. 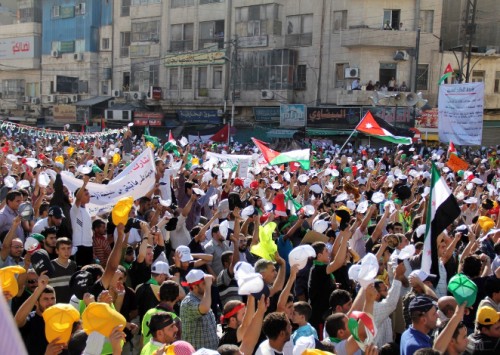 Muslim Brotherhood: Once Jordan’s Most Organised Party, Now Three Groups at Daggers Drawn
Divisions between its key leaders over the past two years have turned Muslim Brotherhood party from the strongest politi...