The conflict in Syria is complex, and no country understands this better than its neighbour Jordan. Jordanians were skeptical of the conflicting global news reports. The confusion was mostly about whether the many resistance groups that had emerged against Syria’s President Bashar al-Assad were legitimate liberation militias or just extremist mercenaries from other parts of the Arab world who had gone to Syria with their own agendas, thus hijacking a genuine people’s revolt.

From the earliest stages of the conflict in 2011, Jordanian opposition parties were very cautious about taking a public stand and had, by 2014, focused their dissent mainly on the government and the possible Jordanian involvement with the US-led coalition. They believed that it was an internal Syrian conflict that had nothing to do with Jordan, and they based their opposition on moral and religious principles, claiming that involvement in the war in Syria, even if it was exclusively in the intelligence field, could result in the loss of innocent lives of civilians and those who really were fighting the Syrian regime.

Meanwhile, several TV and radio commentators suggested that the strength of the extremist Islamic State (IS) was exaggerated. Others went further in their claims, asserting that IS were real mujahideen (freedom fighters) and that it was the “Zionist-controlled media that were inventing all sorts of lies to damage their reputation in order to have an excuse to bomb them all”. Rumours in the Muslim world , which are also doing the rounds in Jordan and on social media, point to the fact that IS executions have always been carried out by masked men and that no one knows who was behind the masks. Such views have also been strengthened by the opinions of family members in Syria and refugees who crossed the border into Jordan.

If the facts of the situation were unclear, how could Jordan join the US-led coalition? Moreover, how could Jordan support some groups over others amidst the confusion? Those were legitimate concerns of the opposition parties, which quickly gained momentum after the terrible pictures of civilian deaths broadcast by the international media and because of the financial stress Jordan is under from the large number of refugees entering the country.

Pressure began to mount in the country after it was revealed in 2014 that Jordan was serving as a de facto base from which the US-led coalition was conducting airstrikes on Syria. The government response was to tighten anti-terrorism laws and reinstate the death penalty after an eight-year moratorium, with the aim of discouraging IS sympathizers from joining the conflict through local Salafist groups. The government estimated that these groups had sent approximately 2,000 fighters into Syria (Salafist groups claim a much higher number, perhaps as high as 8,000).

The new anti-terrorism laws were also used to intimidate and arrest members of the Muslim Brotherhood, most notably Zaki Ben Rashid, deputy leader of the organization, who was arrested on charges of violating the constitution’s anti-terrorism law when he published on social media statements against the United Arab Emirates (UAE), calling the country “the American cop in the region” and a “cancer in the Arab world” – this after the UAE had labelled the Brotherhood a terrorist organization. The Muslim Brotherhood nevertheless has strongholds throughout the country: columnist Rakan Saaidah stated that the Jordanian government would be “reluctant to dissolve the Muslim Brotherhood”, which remains the strongest opposition group and “the most influential actor in mobilizing the Jordanian people”.

Such voices have now disappeared, in public, if not in private. The brutal immolation of the captured Jordanian pilot Lt Muath al-Kasaesbeh in January 2015 by IS prompted Jordanians to re-evaluate their own personal beliefs about the Syrian conflict. The morning after the savage killing, Jordan was in a state of shock. People flooded the streets – especially in Karak, al-Kasaesbeh’s hometown – crying, outraged and calling on the king to avenge the murder. Candles were lit and his picture appeared everywhere. Jordanians felt a deep sense of sorrow and “we are all Muath” became the mantra of the masses in their public mourning protests around the country.

Friday sermons discussed what had happened. Many Jordanians took a more proactive approach, travelling to the holy city of Mecca to perform the umra, a religious pilgrimage, in the name of al-Kasaesbeh (a Muslim can perform a religious duty or an act of charity in another person’s name, thus adding good deeds to the person’s life story). Games, even kickboxing tournaments, have been played in his honour. When school resumed in early February 2015, no one could stop talking about the incident. Students and teachers joined in reciting al-Fatiha, the opening chapter of the Koran read at funerals, weddings and in the five daily prayers of Muslims. Al-Kasaesbeh has become a role model for Jordanian youth; his life and career have become an inspiration, and many young Jordanians have stated in social media their aspiration to become pilots like him.

Pro-government parties and the opposition were quick to join the front lines of the mourners’ demonstrations. All parties expressed their condolences to the al-Kasaesbeh family and condemned IS in the strongest possible words. Jordan’s main English-language newspaper, The Jordan Times, quoted Raed Shiyab, a member of the Muslim Brotherhood Shura Council, as saying that the so-called Islamic State’s crime against pilot Muath Kasaesbeh leaves no doubt of its terrorist nature and that IS actions follow no rational, religious or humanitarian logic and completely contradict Islam’s teachings. Its members are trying to distance themselves from IS, not wanting to be seen as its sympathizers.

Jordanian citizens feel fear as well as the desire for revenge. With the intensifying bombardments by the Jordanian air force against IS, the people fear retaliatory terrorist attacks similar to the Amman bombings of 2005. For that reason, the opposition has not backed down from its opposition to Jordan’s front-line involvement in the conflict. “We affirm our rejection of any participation in this coalition and this war, whose price will be paid only by the sons of this nation with their blood, safety, and stability,” a spokesman for the Muslim Brotherhood stated. Mohammad Shalabi, a Salafist party leader better known as Abu Sayyaf, also commented, “If we simply bomb the Islamic State, this will breed resentment; they may smuggle in people who will execute a terrorist attack [in Jordan].”

The government stance has nevertheless been strengthened, and opposition to the government’s participation in the US-led coalition against IS is now deemed unpatriotic. The population has been asked to be cautious and cooperate with the authorities if they see a threat to the country. Various embassies in Jordan have issued warnings to their nationals, and a system of sirens has been set up to warn of any type of emergency.

Emotions are still running high in Jordan, but there has been a dramatic shift of consciousness and public debate in Jordanian society, with an unscientific poll by The Jordan Times on 12 February showing more than 85% support for Jordanian involvement in the US-led coalition, as the facts of the situation have finally become clearer. 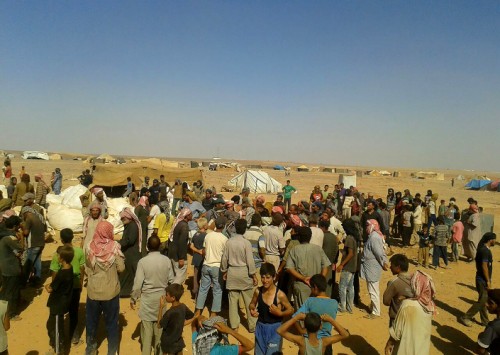 Syrian Refugees Stranded on Closed Jordanian Border
Jordan insists that its open-door refugee policy has not changed, but in fact its border with Syria is closed. More than...