Fanack Home / Jordan / Past to Present / Jordan’s Top Challenge: to remain an Island of Calm in a Troubled Neighbourhood

Jordan’s Top Challenge: to remain an Island of Calm in a Troubled Neighbourhood

On 9 November 2015, Jordanians commemorated the tenth anniversary of the Amman hotel bombings, which killed some 60 people and injured 115. But on the same day they were shocked by another tragic incident that left six dead including the shooter and six others wounded.

Captain Anwar Abu Zaid, a police officer, shot dead five contractors—two Jordanians, two Americans, and a South African—working with a training centre for the Public Security Department, before he was shot dead by another police officer, according to Interior Minister Salameh Hammad.

The recent shooting made people in the Middle Eastern kingdom fear for their country’s security and stability, which they cherish and feel proud of, having been surrounded for years by turbulence in neighbouring countries. Jordan has often been described as an oasis of calm in a troubled region.

What were the motives for the shooting? Did the killer have links with terrorist groups active in neighbouring countries? Did he have personal issues or was he mentally unstable? Is it true he killed his colleagues over disputes with the management of the centre?

These are the questions people here are asking. The answer Jordanians desperately want to hear would be that 29-year-old Abu Zaid had no links to any terror group.A relative of Abu Zaid told Fanack that the captain, a father of two, was religious but a moderate.

Fayez Dweiri, a retired major general in the Jordan army and a military and strategic analyst, believes the timing of the shooting ––to coincide with tenth anniversary of the Amman hotel bombings ––suggests that the shooter may have had links to radical and terror groups, adding that, if he (the shooter) was recruited by al-Qaeda or the Islamic State (IS), it would have dangerous consequences.

“This means the security system in Jordan was penetrated by terrorists,” he said in remarks to Fanack, describing security apparatuses in Jordan as amongst top regional and international professional organizations. The killer might only have been sympathetic to extremist groups, although that is, in itself, a penetration, he added. Authorities announced on November 14 that investigation into the incident showed the deadly shooting was an individual act and not linked to any group.

At a press conference, Interior Minister Salameh Hammad said Jordan will remain a safe and stable country despite the unrest in the region, adding that Abu Zaid committed the deadly attack because he suffered from psychological and financial problems.

Mohammad Abu Rumman, an expert in Islamic movements and jihadists, believes Jordan has to be concerned about its internal security.The possibility that the police officer adopted the ideology of the IS should be a worry for security agencies and should make Jordanians wonder if the country is vulnerable to the ideology of extremism.

“Are we a fragile society vulnerable to ideological penetration and automatically can be penetrated in terms of security?” This is a question that should be asked, Abu Rumman said in an article published in al-Ghad Daily on 11 November.

The analyst said that jihadist Salafists have succeeded in recent years in influencing the middle class in Jordan, as there is a growing number of sympathizers, warning that radicals also were able to influence educated people, particularly university students. He cited the story of the medical student from the southern city of Karak who became an IS suicide bomber. The son of a Jordanian lawmaker who was studying medicine in Ukraine, he blew himself up in Iraq in late September.

He also pointed to a girl, psychology graduate, also from Karak,who attempted to join IS in Syria, though authorities managed to return her from Turkey before she could enter Syria.

Jordan’s army has foiled several infiltration attempts over the past two years as extremists and arm smugglers tried to cross the Syrian border into the Kingdom. But Abu Rumman said that Jordan is like developed Western countries that suffer from this phenomenon, with increasing numbers of people sympathizing with terror groups in the region.

However, he called for more protection measures, not just security, to keep youth clear of radical ideologies. “It is a tough task but fighting terror should be through more efforts in the fields of culture, religion, politics and economy as well as education,” he said. Authorities have urged mosque clerics to address the issue of terror during Friday prayers, and Jordan has hosted local and regional seminars and conferences on how to fight terror and extremism by promoting moderation.

Government spokesperson Mohammad Momani stressed in an interview that Jordan will remain an oasis of stability despite the recent incident.The security system in Jordan is strong and will grow stronger, he said.

A government official estimated that about 2,000 Jordanians joined terror groups, such as IS and Jabhat al-Nusra, in Syria and Iraq, adding that about 600 of them had been killed there. Nearly 500 of those returned to Jordan and are now in jail, the official, who spoke on the condition of anonymity, told Fanack.

The official said that security agencies in Jordan are watching jihadists closely, as they are considered probable members of sleeper cells. Taha Abu Reden, managing editor at al-Rai Arabic daily, believes the incident of the shooting, even if it was linked to terrorists, should not be taken as a signal that security in Jordan is fragile.

Shooting incidents happen everywhere in the world, he said, adding that Jordanians have great confidence in the security agencies in the Kingdom, which, he said, are known to be amongst the world’s most professional and qualified organisations. 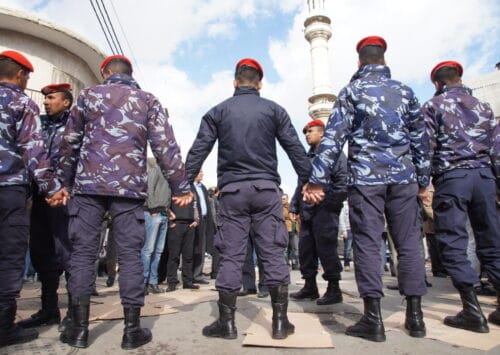 The Arab Spring
Amid continuing protests for more meaningful reforms, the Jordanian regime has favoured continuity and repression over r...