Jordanian authorities are no longer concerned about the Muslim Brotherhood, as divisions between its key leaders over the past two years have turned it from the strongest political party in the kingdom into three divided groups that distrust each other.

The division was triggered by disputes between leading members when some, dubbed reformists, suggested that the Muslim Brotherhood Movement should be registered as a Jordanian group with no ties to the mother organization in Egypt. The reformists, headed by Abdul Majid Thuneibat, believe that banning the movement in Egypt and labelling it a terror group in some Gulf Arab countries and the deterioration in its popularity should have encouraged leaders of the Jordanian Muslim Brotherhood to separate itself from the Muslim Brotherhood in Cairo.

Members of the Egyptian Muslim Brotherhood founded the Muslim Brotherhood Movement in Jordan in 1946. It encouraged a return to Islamic values and the education of Jordanian society, becoming increasingly politicized after the establishment of Israel in 1948, and the Jordanian annexation of the West Bank in 1950. During the 1950s, it had close relations with the monarchy; a relationship which was further strengthened in 1967 after loss of the West Bank to Israel and the PLO’s establishment of a stronghold amongst Palestinian refugees in Jordan.

In the 1980s, the relationship deteriorated due to the Muslim Brotherhood’s criticism of the monarchy, including charges of corruption of the ruling elite, public immorality and insensitivity to religious life. King Hussein distanced himself from the group in 1985, targeting it as a potential threat to the country’s stability. The Muslim Brotherhood has participated in and won elections since the end of the 1980s. Its support for Iraq in the Gulf War of 1990-1991 jeopardized its relationship with and financing from Kuwait and Saudi Arabia but preserved and legitimated its popular support. Its religious message remains popular.

Internal Schisms in the Jordanian Brotherhood

Islamists may be further divided into four groups, given that on 31 December 2015 about 400 members, including top leaders and founding members, resigned from the Islamic Action Front (IAF), the political arm of the Muslim Brotherhood. Ghaith Oudah, one of the members who resigned, also said the resignations may prompt many others to leave the movement, which would ultimately weaken its presence and image in the kingdom.

There are estimated to be a total of 8,000 registered members of the IAF in Jordan, according to a leading member of the political party.

Qudah said that the unprecedented mass resignations were motivated by differences between hawkish and dovish members trying to repair fissures in the original movement but to no avail, adding that they tried to keep the Muslim Brotherhood in Jordan united by bringing foes together, but the hawkish leadership refused to listen.

The 400 members are planning to form a separate political party, he said. The leaders of these members have been dubbed the ‘Group of Elders’, and seen as founding members and moderate figures wielding strong influence in the Muslim Brotherhood.

Political analyst Raed Omari, writer at The Jordan Times and the English-language website of the Saudi-run al-Arabiya News Channel, told Fanack on 9 March 2016 that divisions and disputes in the Islamist movement weakened it, leaving it Jordan’s strongest opposition force no more.

He said that the old group is currently referred to as unlicensed because it has not been registered but that it is not considered illegal. However, in April 2016, the Jordanian government decided to ban the Muslim Brotherhood and police officers closed down its headquarters in the capital Amman. The move was seen by Brotherhood supporters as emulating efforts made by countries such as Egypt, the United Arab Emirates and Saudi Arabia to crack down on the Islamist movement as retaliation for its support of the protests that took place in Jordan throughout 2011-13.

Disputes began when key moderate leaders tried to convince hardliners to change the attitude of the movement and sever ties with the mother group in Egypt, which has been banned there and is regarded as a terror group by several Arab states. “Thuneibat and his followers wanted to operate as an independent Jordanian power, which angered hardliners who believed they were still a strong movement, even after the collapse of fellow groups in Egypt and elsewhere in the Arab world,” he said.

The new Muslim Brotherhood Group, the Zamzam Initiative and the Group of Elders all say that they left the old movement, which describes itself as the only authentic Islamist group, in order to rescue and restore the image of the Islamist movement in Jordan.

Joining these efforts is former Muslim Brotherhood leader Salem Fallahat. After the government’s decision to outlaw the movement, Fallahat started planning the formation of a new party called Hukama (the Wise), whose more moderate political line would follow the model of the Tunisian Islamist Ennahda party.

Separation from the Egyptian Mother Group

In February 2016, the Muslim Brotherhood felt the pressure of the mass resignations. It decided to modify its by-laws and end its affiliation with the mother group in Cairo.

Analyst Taha Abu Reden, managing editor at the al-Rai daily, said the move was too late, as the damage that had been done cannot be repaired. He added that the move was intended to prevent further schisms. “I expect more members to defect from the movement because its hawkish leadership continues to fail to understand that the political game has changed in Jordan. The movement is no longer powerful, as they lost the support they had in the street some four years ago when the Arab Spring was still a reality.”

During 2011 and 2012, Jordan experienced several protests calling for political and constitutional reforms. The protests were led or organized by the Islamic movement. A member of IAF, who wished to remain anonymous, told Fanack on 9 March 2016, however, that the move to cut ties with its Egyptian mother was not meant to deter defectors. “The movement has been studying this decision for almost three years. It was not taken due to recent resignations.”

He added that cutting ties with Cairo was supposed to be implemented after the 2013 ouster of former Egyptian president Mohamed Morsi, Muslim Brotherhood member and Egypt’s first post-Mubarak leader. “We [Islamists] waited because we did not want to show that we had given up on our fellow Islamists in Egypt,” he said.

The new Muslim Brotherhood Society claims to be the legitimate successor of the old Brotherhood and has sought a court ruling to acquire the assets of the movement established in Jordan in 1946.

The IAF leader charged the Jordanian government with being behind the defections and the establishment of the new Brotherhood Society, claiming that it is a government conspiracy against the Islamists.

Minister of Political Affairs Khaled Kalaldeh rejected this charge, saying that the government does not intervene in the internal differences of the Islamists. He told Fanack in March 2016 that the government treats all political parties equally. “It is unacceptable for a group to blame the government for the mistakes they made over past years,” he said.

Analyst Abu Reden agrees with the minister, suggesting that the divisions were caused by differences over tactics and the political views of top leaders. Some founders of the new group were inclined to respond to political developments in the kingdom, such as amendments to the election law and other legislative reforms.

The founders of the Zamzam Initiative, who were former leading figures of the Muslim Brotherhood, are in the process of finalizing the registration of their political party. Political analyst Omari believes the Zamzam Initiative will participate in the upcoming parliamentary elections, slated for the last quarter of 2016 or early 2017.

The Muslim Brotherhood Society has announced that it too is considering standing in these elections. Omari and Reden believe this to be because the society wants to be part of the political scene in Jordan and they oppose the boycotting position the old group maintained for many years.

Following the banning of the Muslim Brotherhood in April 2016, however, it is uncertain whether the movement will participate in the next elections. In fact, the government has prohibited the movement from holding its internal elections and has not allowed the IAF to fundraise or hold rallies. 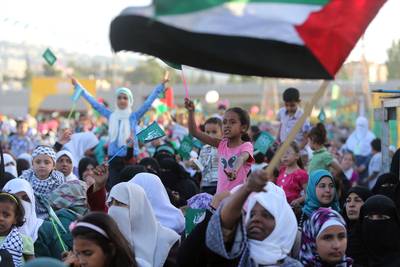