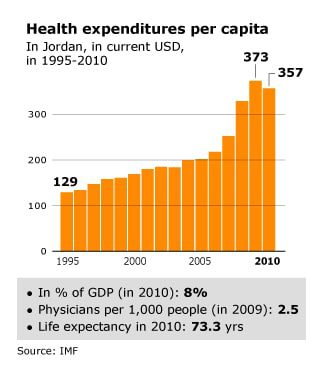 Jordan has an advanced health-care system, and the sector has continued to develop during the past two decades. UNICEF’s statistics for 2010 show that the infant-mortality rate (under 1) was 18 per thousand live births, compared to 32 in 1990, while life expectancy (years) at birth was 73. The World Health Organization (WHO) indicators for 2009 show that the kingdom’s expenditure on health was 9.3 percent of total GDP, and the Ministry of Health budget was 11.3 percent of the total government budget in 2009. The government provides, at nominal cost, health services to the underprivileged in its 32 public hospitals and health centres; cancer treatment is free.

USAID has been the main donor in the health sector, helping Jordan upgrade its health services by funding several projects, including improving its primary-health centres – approximately 380 in the 12 governorates – by refurbishing and re-equipping them, and by promoting a healthy lifestyle among Jordanians.

Jordan has been promoting itself as a regional medical hub, where other Arabs can come for treatment: it is a top health-care destination for many Arabs, especially from Yemen, Algeria, and Libya. Petra News Agency said that revenues from medical tourism reached more than USD 1 billion in 2010, and the number of patients reached 220,000. In a 2008 study, the World Bank ranked Jordan as the leading medical destination in the region and the fifth-ranked such destination in the world.

The unrest that swept through Arab countries since the beginning of 2011 has, however, caused the number of Arab patients to plummet, resulting in a 90-percent drop in Libyan patients, 60-percent in Syrians, and 50-percent in Yemenis and Bahrainis.

Mervat Salman ©WIKIMEDIA COMMONS
Mervat Salman ©WIKIMEDIA COMMONS
©Fanack
"Ignorance leads to fear, fear leads to hatred, and hatred leads to violence.
This is the equation."
IBN RUSHD/AVERROES (1126 – 1198)
We are a Dutch not for profit organisation (NGO), financed solely by individuals who share our belief in the importance of publishing and disseminating reliable, unbiased information on the Middle East & North Africa region. To represent the voice of the region’s people, we carefully echo the region’s heartbeat by offering fact-checked and therefore credible information.
Your support is greatly appreciated and helpful!
Donate