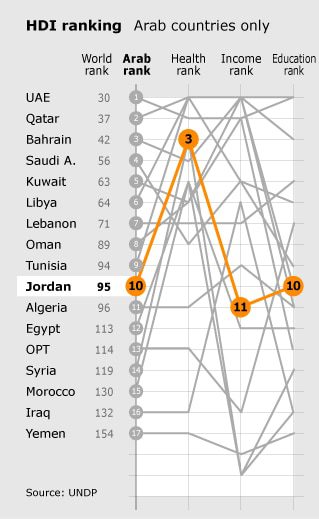 In 2011 Jordan ranked 95 out of 187 countries and areas in the UNDP’s annual Human Development Index (HDI), which measures the well-being of nations and includes three basic components of human development: health, education, and income. Over the years, particularly since 1980, Jordan’s HDI increased from 0.5 to 0.7, placing it at the top of the ‘medium’ category. Jordan exceeded the average of the rest of the Arab world, which increased from 0.4 in 1980 to 0.64 in 2011. Between 1980 and 2011, Jordan’s life expectancy at birth increased by more than six years; the average number of years of education increased by about three. The country’s per capita gross national income rose from USD 3,980 to USD 5,300 (using purchasing power parity rates).

In 1995, the HDI introduced a new measure, the Gender Inequality Index, which reflects the deficits of women in three areas – reproductive health, empowerment, and economic activity. Based on the 2011 data, Jordan’s ranking was 83 out of 187 countries in gender inequality. Female participation in the labour market was 23 percent in 2009, compared to 73 percent for men. In 2010, 57 percent of adult women aged 25 or older have a secondary or higher level of education compared to 74 percent for men. In 2008, for every 100,000 live births, 59 women die of pregnancy-related causes. The adolescent fertility rate was 26.5 births per 1,000 live births.