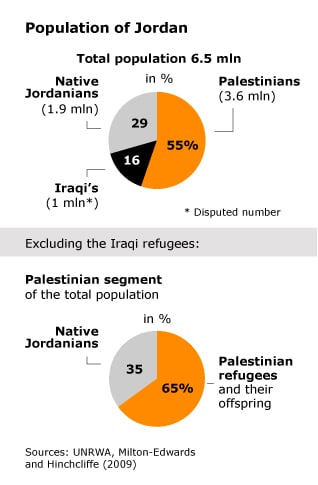 Although a small country with limited natural resources, Jordan took in the most Palestinian refugees in 1948-1949 and 1967. UNRWA estimates the number of registered Palestinian refugees at more than 2 million, most of whom have the Jordanian nationality, the exception being 140,000 who are originally from the Gaza Strip, which was administered by Egypt until 1967; they carry only temporary passports and are not full citizens.

Jordanian officials have, on several occasions, expressed fears that Jordan might be considered an alternative homeland for the Palestinians and began to revoke the nationality of some Jordanians of Palestinian origin. They explained that these measures were meant to guarantee the Palestinians’ right to return to their homeland by renewing permits that recognize them as citizens in the West Bank. They also said that Jordan was attempting to implement a 1988 administrative decision that severed legal and administrative ties with the West Bank, a decision that was taken during the 1974 summit in Rabat, in order to allow the Palestinian Liberation Organization (PLO) to act as the sole legitimate representative of the Palestinian people.

In February 2010, Human Rights Watch (HRW) warned Jordanian authorities against revoking the citizenship of these people. The human-rights watchdog said that the Jordanian authorities stripped more than 2,700 people of their nationality between 2004 and 2008, and the practice continued in 2009. HRW said that the move was not based on a transparent regulation and that, by rescinding their citizenship, the authorities were denying these people the basic rights of citizenship, including access to education and health care, finding work, travelling, and owning property (see also the HRW report Stateless Again).

More recently, Jordan received another wave of refugees, this time from Iraq,  after the American-led war on Iraq in 2003. In 2007, the Norway-based social-science research institute FAFO, in cooperation with the Jordanian Department of Statistics, surveyed Iraqis in the kingdom, concluding that in May 2007 there were between 450,000 and 500,000 Iraqis in Jordan. This imposed a heavy burden on the fragile economy of Jordan. Since then, many Iraqi refugees have moved to a third country with the help of the UNHCR, while others, in better financial condition, remained in the kingdom, starting their own businesses and buying property in Amman.