Nucleus of this Operation Vantage was an aircraft carrier with escorts and a sizeable force of the Royal Marines with their helicopters and tanks in support Also, airborne infantry units were flown in. These provided a credible shield to prevent the modest Iraqi army to move southwards. In a few months after the British force had very visibly dug in, the threat subsided with the recognition of Kuwait by the Arab League and the forming of a credible defensive force. The Iraqi threat subsided, but the Iraq’s strategic position remained. Ill-defined borders demarcations were settled in the years after independence. 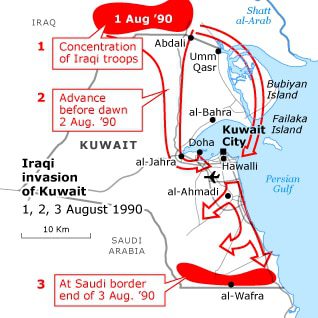 After signing an armistice with Iran in 1989, Iraq was left with a colossal debt – and substantial armed forces that had never been demobilized. In the course of 1990 tensions between Iraq and Kuwait rose as a result of Kuwait’s structural extension of its OPEC oil-production quotum – which had a negative effect on  oil prices – and the alleged stealing of oil from a field spanning the border area. Tensions came to boiling point on 2 August 1990, when well-trained Iraqi Republican Guard units and heli borne troops quickly overpowered the small Kuwaiti forces that dared to put up symbolic resistance. Some Kuwaiti aircraft and army units – in total some 7,000 men – fled across the border to Saudi Arabia.

The Kuwaiti forces in exile participated in the ground offensive that unfolded on 24 February 1991. Earlier, the two dozen Kuwaiti Mirage and Skyhawk fighter bombers had joined in the air offensive that had lasted for six weeks. The army units had been merged in the so-called Martyr Brigade that was attached to the Joint Forces Command East, which combined units of several Gulf States. This force drove from the Saudi border towards Kuwait City, initially with the objective to draw Iraqi units away from the main axis of attack by coalition armoured formations that sliced through the south of Iraq towards Basra. But resistance by the Iraqi forces in Kuwait itself proved less impressive, and the Kuwaiti forces were able to participate in the liberation of their capital. Only one Skyhawk was shot down, and one Kuwaiti soldier was killed in action.

Past to Present
Past to Present
In January 2006, Sheikh Al-Ahmad Al-Jaber was pledged allegiance as an Emir for the country, succeeding Sheikh Saad Al-A... 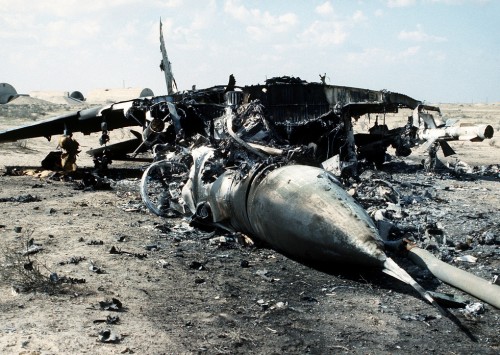 Occupation
Occupation
The violence that had accompanied the occupation and liberation of Kuwait spilled over into its post-war society. Member...