A traumatic backlash hit the independent nation in the small hours of 2 August 1990, when Saddam Hussein’s Iraqi troops invaded Kuwait. The Iraqi claim that Kuwait was once part of its territory was tenuous at best. A more compelling explanation can be found in domestic Iraqi economics and politics. Kuwait’s lightly-guarded oil wealth offered an apparent solution to the debt Iraq had contracted during the disastrous war it had launched on Iran. By noon of the first day, Iraqi forces controlled Kuwait City. The Emir, his government, practically all of the royal family, and scores of wealthier Kuwaiti citizens fled southwards, to Saudi Arabia. Iraqi officials announced the annexation of Kuwait, which they asserted had always been part of the sovereign state of Iraq, as ‘the rightful successor of the Ottoman Empire in the region’. The international community, especially the United States, was not convinced by the Iraqi arguments. On 26 February 1991, after forty-two days of military action, the last Iraqi troops in Kuwait surrendered to a US-led, UN-sanctioned liberation force, to which an unprecedented thirty-four nations had contributed.

Three weeks later, when Emir Jaber III al-Sabah (1926-2006) returned from Saudi Arabia, the sky above Kuwait was blackened by the smoke from seven hundred oil fires, the result of the torching of Kuwait’s petroleum facilities by the retreating Iraqi forces. The valves of undamaged facilities had been opened, and huge lakes of oil polluted Kuwait’s soil, underground aquifers, and coastal waters. Banks, hospitals, airports, telecommunication centres, educational and scientific institutions, and museums had been looted. According to recent estimates, 113 Kuwaiti civilians, 118 Kuwaiti soldiers and 439 Kuwaiti ‘non-nationals‘ had been killed. In addition, some six hundred Kuwaitis remained registered as ‘missing’. They were last seen in Iraqi custody. The bodies of many of these MIA were found in a mass grave in Iraq in 2004. The number of Kuwaitis tortured and raped in prison will never be known, given the traditional Kuwaiti reticence about ‘private’ and sexually-related subjects.

The violence that had accompanied the occupation and liberation of Kuwait spilled over into its post-war society. Members of Kuwait’s resistance groups retained their weaponry, sometimes using them for retaliation – often against non-citizens they suspected of collaboration – or for other criminal acts. The situation was discomforting for the royal family, since most former members of the resistance were critical of the fact that the Al Sabah had been unable to prevent Iraq from devastating their homeland, and had, moreover, spent the occupation and the first weeks after liberation in luxury in exile. As soon as the Emir and his government returned, martial law was imposed. Perhaps in order to regain credit among those Kuwaiti citizens who had lived through the horrors of the Iraqi occupation, almost 6,000 alleged collaborators, mostly non-citizens, were rounded up by the authorities before martial law was lifted in the summer of 1991. Human-rights organizations have criticized the lack of basic rights for these suspects, and allegations of torture were widespread. Some reports have suggested that dozens of Kuwaiti non-citizens died in custody.

In 1991 the UN established a Compensation Commission (UNCC) to consider all claims for compensation resulting from the Iraqi invasion. When the claim processing was concluded in 2005, the total claims exceeded USD 350 billion. Of this, USD 53 billion was awarded by the UNCC. By the summer of 2009, more than USD 27 billion had been paid by Iraq. The repayments are controversial: critics argue that the present impoverished population of Iraq should not be expected to pay for the crimes of its former dictator. 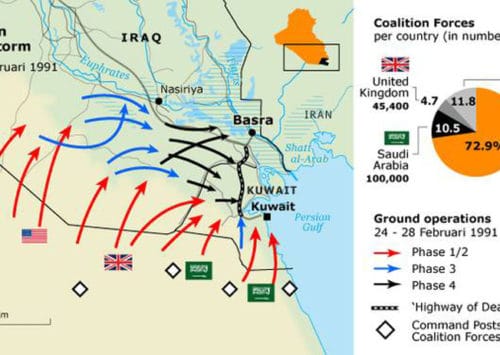