The Kuwaiti economy (and Kuwait City) was booming in the past two decades. During the 1990s the government invested tens of billions of dollars into national reconstruction. Citizens spent liberally to replace their looted or destroyed properties, and economic activity soon accelerated to above pre-war levels.

When, in early 2003, a US-led invasion toppled the regime of Saddam Hussein, Kuwait enjoyed another economic boom. Kuwaiti firms were able to capitalize on their American contacts in order to gain lucrative contracts for trade, construction, and services in Iraq. Record oil prices in succeeding years led to record oil revenues.

But the end of the Iraqi threat of invasion has also brought domestic problems to the fore. Recent years have been characterized by deadlock between an increasingly vocal National Assembly and the government. While many Kuwaitis acknowledge the need for political and economic reform, national consensus on how to proceed remains elusive. At present, the emirate appears to be being left behind, economically, by the more decisive and visionary Gulf states of Qatar and the UAE.

Opposition power peaked around 2006, partly as the result of deep divisions within the ruling family. After the death of Emir Jaber in 2006 the opposition forced the ailing Crown Prince, Saad al-Abdullah al-Sabah (b. 1930), to abdicate after a succession crisis lasting a mere nine days. Jaber’s half-brother Sabah al-Sabah (b. 1923) became the new ruler. He actually worsened intra-family relations by appointing key ministers almost exclusively from his own (Jaber’s) line of the family and making his brother Nawaf (b. 1937) heir apparent. Making the most of Al Sabah internal troubles, Parliament was able to push through a string of political reforms. A longstanding but controversial ban on public gatherings was lifted, the election law was changed to limit gerrymandering and vote buying, women acquired the right to vote and run for office, and media laws were liberalized. The ruling family has reacted by dissolving each rebellious Parliament and calling for new elections. This has led some to fear that Parliament will be suspended indefinitely once Emir Sabah has finally succeeded in closing family ranks. 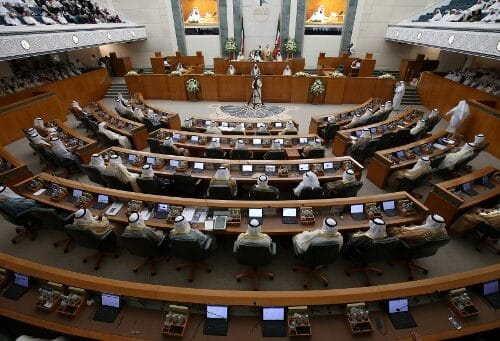