Although Kuwait ranks highest (37th) of all Middle Eastern countries on the UNDP gender-related development index, discrimination against women in Kuwait is widespread and has been institutionalized in many laws. Only since 2005 have Kuwaiti women been allowed to vote and stand for office in parliamentary elections. Earlier attempts by the government to introduce political rights for female citizens had been blocked by Parliament.

Spousal rape is not considered a crime in Kuwait – at least it is not recognized as such by the judicial system. Likewise, Kuwaiti law does not specifically prohibit domestic violence or (non-domestic) sexual harassment. Nonetheless, as a glance at a local newspaper will quickly show the outsider, sexual harassment and even rape are regular phenomena in Kuwaiti society. A local newspaper survey found that 40 percent of female respondents from various professions had experienced sexual harassment in the workplace. Domestic servants are in an especially vulnerable position, and if the cases making the news are only the tip of the iceberg – considering the fact that domestic servants are almost totally dependent on their sponsors and generally kept in social isolation – then we can only begin to assess the seriousness of the problem of local sexual crime.

Emancipation for Kuwaiti women has always been easiest in the upper classes. Virtually all Kuwaiti women attaining social positions of high standing and visibility come from the elite merchant families or the ruling family. In these circles, educated women are not considered so much a threat to male economic dominance and patriarchal tradition as an additional way to keep wealth and power within their own social class. When no able ‘elite’ male is available for a certain position, members of the upper class are more likely to turn to a female candidate from within the own group than to a male outsider from the middle classes.

Because the middle classes rely heavily on civil-service jobs in an already seriously overcrowded state bureaucracy, they have more reasons to fear the competition of highly educated women (women now constitute well over half of the students at Kuwait University). Women in civil service are typically ‘sheltered’ by males from the more ‘demanding’ and thus more prestigious and influential positions. This may partly explain why membership in Islamist associations is so popular among modern Kuwaiti middle-class women. These segregated organizations offer middle-class women a ‘decent’ platform for acquiring social standing and influence, which has been denied to them by their male counterparts in regular mixed society. 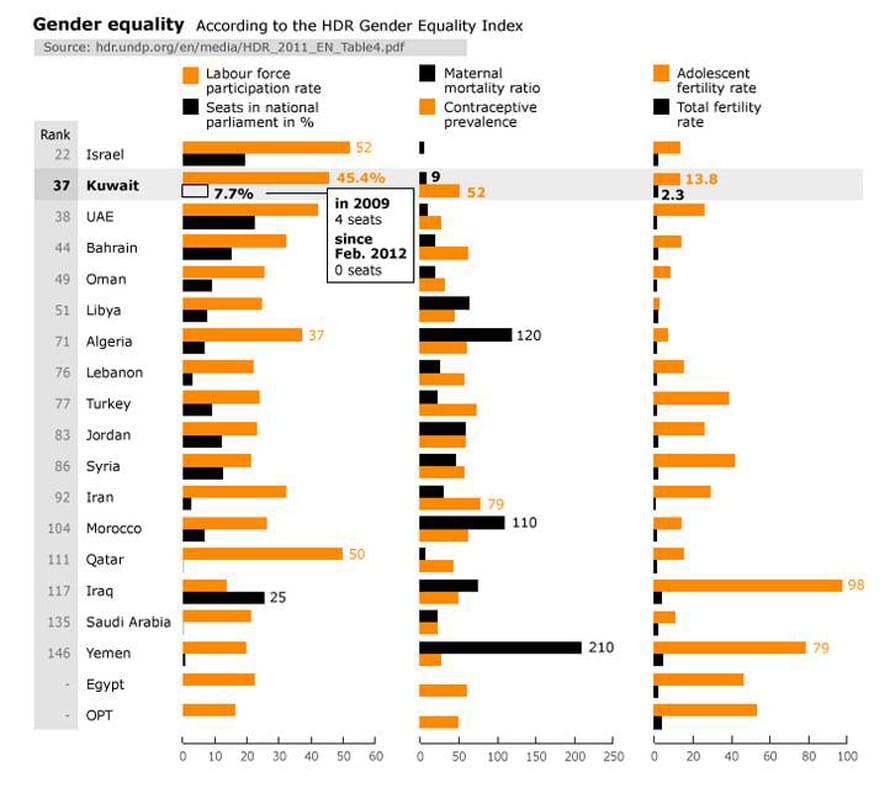 ©Hollandse Hoogte
©Hollandse Hoogte
©Fanack
"Ignorance leads to fear, fear leads to hatred, and hatred leads to violence.
This is the equation."
IBN RUSHD/AVERROES (1126 – 1198)
We are a Dutch not for profit organisation (NGO), financed solely by individuals who share our belief in the importance of publishing and disseminating reliable, unbiased information on the Middle East & North Africa region. To represent the voice of the region’s people, we carefully echo the region’s heartbeat by offering fact-checked and therefore credible information.
Your support is greatly appreciated and helpful!
Donate