Lebanese voters are preparing to elect a new parliament for the first time in nine years, under new election rules and districts adopted in 2017.

The 6 May 2018 elections has sparked hopes among some – particularly young Lebanese who have become active in protest movements and civil society campaigns in recent years – that a change in the long-running political status quo could be forthcoming. The election has also inspired the rise of new political parties promising reform.

Others remain cynical, believing that the current decision makers have engineered the rules to ensure that they retain their hold on power. Still others regard the prospect of the elections with anxiety, fearing that it could destabilize the delicate balance of power that has kept Lebanon from sliding back into civil war, despite the bitter seven-year conflict in neighbouring Syria.

The last parliamentary elections were held in 2009, prior to the outbreak of the Syrian war, which has brought more than 1 million refugees to Lebanon and divided Lebanese society and politics into those who support and oppose the al-Assad regime. The next elections after that should have been held in 2013, but they were postponed – first until 2014 and then until 2017 – with the parliament claiming an extension was necessary due to the destabilizing effects of the Syrian war. A further postponement was made in 2017, amid a debate about a new election law. Ultimately, the election law was adopted in June 2017 and new elections set for May 2018.

The new law shifts elections to a partially proportional representation system rather than the previous winner-takes-all system. The elections will also take place with new districts, which for the most part have a clearer sectarian majority than the old ones. For instance, Beirut has two districts, one of which is primarily Christian and represented by eight members of parliament, the other which is primarily Muslim and has 11 representatives.

Each district’s candidates are divided into lists by party, with voters casting a vote both for their preferred list and their favoured candidate within the list. The voting for lists determines the number of seats each list will take, and the candidates with the most votes within the list take the seats up to the allocated number. The system is further complicated by the fact that each sect also has a quota, so once a sect’s quota is filled, the remaining candidates from that sect are eliminated.

Anthony Elghossain, a Beirut-based lawyer who wrote an analysis of the new law for the Carnegie Middle East Center, noted that the proportional system is ‘potentially more inclusive than the majoritarian system that Lebanon has used since its independence in 1943’.

However, he added, ‘The redistricting could further entrench sectarian politics, and the proportional representation is undermined by technical measures that could water down its benefits to the community.’

A rush of candidates signed up to compete for the 128 parliamentary seats. Women’s rights advocates did not succeed, as they had hoped, in having a quota for women’s representation written into the new law. However, in a development that many find hopeful, there are 111 women among the 976 candidates. Although this represents only 11 per cent of the total candidates, it is a major increase from the last parliamentary elections in 2009, when only 12 women ran. Currently, there are only four female members of parliament, and the nation’s minister for women’s affairs is a man.

As usual in Lebanon, the slate of candidates includes sons and daughters of some of the current and former leaders of the country. Among them are Taymour Jumblatt, son of the prominent Druze political leader Walid Jumblatt, who is stepping aside to allow him to run; Tony Frangieh, son of current MP Sulieman Frangieh, grandson of the assassinated politician and militia leader Tony Frangieh and great-grandson of the former president Sulieman Frangieh; and Michelle Tueni, daughter of the assassinated politician and newspaper publisher Gebran Tueni.

Yet this political opportunity also offers new parties the chance to break the control of these political dynasties. Some of these parties emerged from the 2015 ‘You Stink’ movement that came out of the rubbish-collection crisis in Beirut. A coalition of independent parties, called Tahalof Watani (or My Homeland Alliance) has formed to run candidates across the country, with the idea of presenting a unified platform to avoid independent parties splitting votes by running against each other.

The coalition includes groups focused on elections in specific geographic areas, such as the LiBaladi party, which is running seven candidates in Beirut, three of them women. The party’s stated aim is to achieve ‘civil parliamentary representation that reinstates the concept of citizenship and breaks the monopoly of the ruling political class based on the populism and the sectarian allocation of constitutional institutions’.

Its platform includes eliminating the sectarian apportionment of positions in the government and instead establishing a Senate to represent the religious groups; pushing for a civil personal status law to govern matters such as marriage and divorce, which are currently governed exclusively by religious authorities of the different sects; and pushing back against external ‘ties and loyalties that have turned the Lebanese parties into agents that dominate foreign interests at the expense of the national interest’. (The latter is a clear reference to the influence of Iran and Saudi Arabia on political factions in Lebanon).

Another of the parties participating in the coalition, Tajamou Abna Baalbek (or Gathering of the Sons of Baalbek, a city near the eastern border), came from the local political group Baalbek Madinati, which challenged the traditional dominance of Hezbollah in the city, winning 46 per cent of the votes in the 2016 municipal elections.

Another new party, Sabaa, formed in 2016, which describes itself as ‘the only real national and cross-sectarian platform designed to organize the participation of citizens in public affairs and to create new leaders’, has a high-profile candidate in former Future TV personality Paula Yacoubian.

Along with the emergence of new players and the open question of how much of a dent they can make in the political establishment, some analysts see the elections as a test for Prime Minister Saad Hariri.

Hariri had been losing support among his Sunni constituency, who saw him as appeasing Hezbollah, and faced a challenger in Ashraf Rifi, former justice minister. But Hariri got an unexpected boost in popularity after the bizarre saga that erupted in November 2017, when he appeared to have been strong-armed into tendering his resignation by Saudi Arabia during a visit to the kingdom and then prevented from leaving. International pressure led by France procured Hariri’s release and return to Lebanon, where he rescinded his resignation. Lebanese from across the political and sectarian spectrum saw the Saudi move as an affront to Lebanon’s sovereignty and rallied around the prime minister.

Another question, clearly, will be whether the elections diminish or strengthen the power of Hezbollah in Lebanon’s government. This will certainly impact the path Lebanon takes in its future dealings with the Syrian regime, of which Hezbollah has been a staunch supporter, and elsewhere in the region. As such, the impact of May’s elections will be felt well outside the borders of the small country and by many more people than the approximately 6 million living inside it. 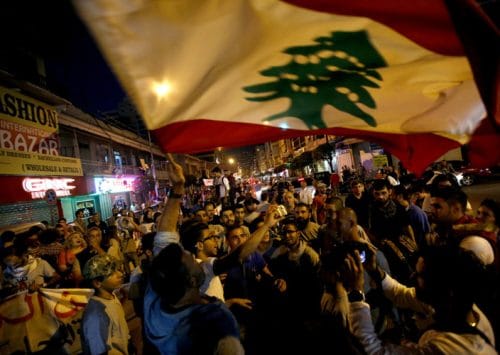 Civil Society Groups Hope to Shift Balance of Power in Lebanese Elections
Even without a majority in parliament, political divisions and no practical immediate impact, civil society can at least...