A growing number of civil society groups are putting forward candidates for the 6 May 2018 parliamentary elections in Lebanon, hoping to challenge the hold on power by traditional forces.

The garbage crisis of 2015, which resulted in protests in the capital Beirut and outside landfills, sparked the need for a new expression of activism. You Stink, a social media campaign launched by community and environmental groups criticizing the government for its failure to get the rubbish of Beirut’s streets, triggered a desire for real change in Lebanese politics. In the three years since, people who were part of the campaign as well as civil society organizations have become increasingly politically active.

For example, the independent Beirut Madinati (My City) narrowly lost the municipal elections in May 2016, with 40 per cent of the votes. In October 2016, a new independent political group called Sabaa (Seven) was launched by some of the same people involved in You Stink and Beirut Madinati. For the 2018 parliamentary elections, the National Coalition, an alliance of 11 civil society groups led by Sabaa, will represent a large part of this civil society. Other civil society lists have also been formed in different parts of Lebanon, independently of the National Coalition.

“Coming out of the need to organize politically and unite in a lasting initiative, so-called civil society actors, groups and networks of activists have been deliberating internal strategies and hopes of affecting change through the next parliamentary elections,” said Mona Khneisser, project coordinator of the Civil Society and Policy-making Program at Issam Fares Institute. “Recurrent frustrations among the so-called civil society activists in their perceived ability to affect change in the system through single battles, has compelled several towards the electoral process and the logic of gradual change from within. Activists’ long experience in advocacy and single-issue campaigning had revealed to them the structural impediments and political unwillingness to accede to public demands, the trash crisis protests in 2015 [being] one recent reminder.”

One of the lists in the National Coalition is LiBaladi (For My Country) in Beirut. It announced its candidates and political programme on 10 March. The main goals of the programme are institutional, including the abolition of sectarianism, implementing the Taif Agreement (which ended the civil war in 1989) and separating the executive from the judiciary and legislative branches; improving basic infrastructures to create jobs; introducing a new banking and financial system, housing and education; and sovereignty and security.

“It’s a new political movement not bound to the traditional political ideologies,” said Tarek Ammar, an expert in the development of public policy and a LiBaladi candidate. “We focus on people’s needs and priorities. Our groups cover all Lebanon, this is a big challenge. We are sure to have some parliament members [from the National Coalition], but for now we need solidarity and mobilized voters to be able to make a difference.”

In Baabda, a district south of Beirut, Paul Abi Rached, an environmental activist and president of T.E.R.R.E. Liban, launched the independent list Safha Jadida li Lubnan (New Page for Lebanon) with engineer Dr Ajwad Ayash and business law professor Olfat al-Sabeh. The list is not complete yet as they are approaching other people who will be best able to represent each of their six priorities: environment, society and economy, health, political reform and security.

“We base our programme on the 2030 Sustainable Development Goals,” Abi Rached said. “We think it’s a good moment because the traditional political parties have shown mainly failures. We want to participate because they never listened to our solutions to Lebanon’s problems, and citizens started to realize that. I think people are disgusted by their current MPs’ actions, which might give us a chance.”

East of Beirut in Matn, Nadine Moussa, a lawyer and the first woman in Lebanon to run for president, announced her candidacy with the independent Tan3eesh (Live Better) list, although she is thinking about joining forces with another civil society group at a later date. She is one of 111 women running this year. The list’s political platform includes achieving the independence of the judiciary system, securing citizens’ rights by ensuring they have access to life’s essentials, protecting public spaces, and a new decision on Lebanon’s oil and gas resources.

“According to surveys from the National Democratic Institute, Lebanese people are prioritizing social security, job opportunities and fighting corruption,” Moussa said. “I think that people have changed their mind since 2009 was a good time. When I speak to people in my region, for example, they are starting to accept the concept of secularism, which is new. The new voting law helps too, because with the introduction of the proportional system, now we need only 13,000 votes instead of 50,000 to get to a result. The traditional parties will again play on fear as their main asset, like threats from foreign countries, but should we keep on living in fear? We have to rely a bit more on the people’s intelligence instead of their emotion.”

Even if these independent candidates manage to lead the debate and attract voters, another issue is the political system itself. “Assuming that winning elections automatically implies winning power or realizing change may be a misguided assumption and a misled hope,” Khneisser said. “The majority of seats are predicted to remain within the grasp of traditional sectarian parties, who have designed a law tailored to their needs, while making only minor concessions to maintain a minimum level of legitimacy for the system.”

But even without a majority in parliament, political divisions and no practical immediate impact, civil society can at least take the first of what is likely to be many steps towards a more diverse political life in Lebanon. 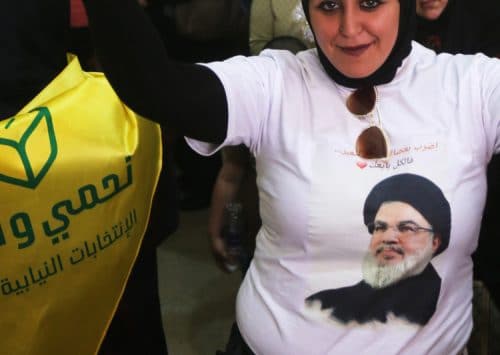 In Lebanon, Balance of Power Shifts after Chaotic Elections
Hezbollah party and its allies won more than a third of the 128 seats, giving them veto power. Prime Minister Saad Harir...