Hezbollah Strengthens Position in Middle East through Involvement in Syria

Hezbollah is a militant non-state actor originally based and active in Lebanon. However, it has become increasingly influential following its military backing of Bashar al-Assad’s regime in Syria since 2012. Although its presence in Syria seems to be decreasing, its involvement in the conflict has changed its position in the Middle East for good.

Hezbollah, which literally means ‘party of God’ in Arabic, was formed in the wake of the Islamic Revolution in Iran in 1979 and the Israeli invasion of south Lebanon in 1982. It has both a military wing, which is designated as a terrorist organization by a broad coalition of countries, and a non-military wing, which is represented in the Lebanese government. Hezbollah supports the Syrian regime because it is Iran’s main ally in the region, and because Iran provides the group with financial and political assistance as well as weapons and training. Both consider Israel as an enemy.

“The war is not over yet, so Hezbollah still has some deployments in Syria,” Heiko Wimmen, project director for Iraq, Syria and Lebanon at the International Crisis Group, told Fanack. “But Nasrallah [Hassan Nasrallah, leader of Hezbollah] said that if there wasn’t any large battle operation, his people would be redeployed.”

In a June 2018 article for the Center for Strategic and International Studies, Seth Jones and Maxwell Markusen wrote: ‘Hezbollah’s political objectives in Syria include ensuring the survival of the Assad regime; protecting – and expanding – Hezbollah’s political power and influence; balancing against Israel and the United States; stemming the spread of Sunni Salafi jihadist and other “takfiri” groups; and defending Shia communities.’

They continued: ‘An important military objective includes preserving – and potentially expanding – the use of Syrian territory as a logistical route for transporting Iranian missile parts and other material. Hezbollah also seeks to strengthen its own military capabilities in case of a possible war with Israel.… The Syria conflict has improved Hezbollah’s urban warfare capabilities, provided real-world battlefield coordination with Iran and Russia, and augmented its collaboration with less-sophisticated Iranian battlefield proxies from Afghanistan and other countries.’

These factors have increased Hezbollah’s regional importance and changed how it behaves. “Before Syria, Hezbollah had a defined theatre of operations – certain parts of Lebanon – and purpose – pushing Israel out and creating deterrence,” Wimmen said. “It was all about Lebanon and Israel-Lebanon, not regional. Through their participation in the Syrian war, they have helped to save a crucial Iranian ally from a defeat by rebels. They are clearly becoming regional actors in a complex regional confrontation.”

The recent launch of Israeli missiles and other Israeli attacks on Iranian positions have served to escalate the situation in Syria. In January 2019, Israel acknowledged its intervention in Syria,  right after completing a hunt for tunnels dug by Hezbollah fighters across the Israel-Lebanon border. Israel feels threatened by alleged Iranian nuclear weapon plans and is worried about Iranian and Hezbollah activities in Syria, especially since the Syrian regime regained Daraa, an opposition stronghold that brought Syrian forces close to the Israeli-held section of the Golan Heights.

Israel seized the Golan Heights from Syria in 1967 during the Six-Day War between Israel and several Arab states. Any future war between Hezbollah and Israel would be far more destructive to both countries than the 2006 conflict, and an accidental outbreak is always possible, especially given recent tensions over Hezbollah’s presence in the Syrian-held section of the Golan Heights. One of the only reasons it has not happened yet is that Israel is afraid of Hezbollah’s newly acquired advanced missiles.

In The Atlantic magazine, David Kenner wrote: ‘For Israeli security officials, the nightmare scenario is that these weapons may become accurate enough to hit Israel’s civilian and military infrastructure, paralyzing daily life in the country. The threat they pose has already drawn Israel deeper into the Syrian conflict, and promises to fundamentally alter the next war with Hezbollah – a war that could come sooner than expected.’

A conflict with Israel is the only way the situation could affect Lebanon, where Hezbollah is part of the government but does not seem to truly want to rule the country on its own. “The rest of the political parties in Lebanon have realized that the country cannot be ruled without Hezbollah. But Hezbollah doesn’t have the ambition of ruling it alone either,” Wimmen told Fanack. “It doesn’t want to be at the forefront. It did well in the 2018 elections, but it wasn’t the sweeping victory that is often portrayed. If you look at the 2009 elections, there is a clear shift, but remember that back then the other camp was massively supported by Saudi Arabia and Western countries. That is not the case anymore.”

In 2018, parties and individuals who back Hezbollah’s possession of arms won at least 70 of parliament’s 128 seats. In the 2009 election, an anti-Hezbollah alliance led by Saad Hariri and backed by Saudi Arabia won a majority.

“It looks like Saudi Arabia is no longer behind Hezbollah’s opponents, as it used to be, because it’s no longer interested in Syria and Lebanon, and Iran is more strongly behind Hezbollah,” Wimmen added. “[Hezbollah’s] position is now stronger, and it’s not in need of compromises. People have to come to them, and not the opposite. There is a real shift in the region, to which Hezbollah really contributed.”

The only sign of a Saudi interest in Lebanese affairs was apparent during Prime Minister Hariri’s forced stay in Saudi Arabia in December 2017, when he resigned on TV and publicly blamed Iran for it. According to the New York Times, for Saudi Crown Prince Mohammed bin Salman, it was ‘time to stop Iran’s Lebanese ally, Hezbollah, the powerful Shiite organization that is Lebanon’s most influential political actor, from growing still stronger’. But this did not work. Hariri eventually took back his job. ‘Now, Mr. Hariri remains in office with new popularity, and Hezbollah is stronger than before,’ the paper wrote.

Hezbollah also seems to be involved in Yemen, although Nasrallah has made no official declaration to that effect. In an August 2018 article, the Middle East Policy Council wrote: ‘Images of Houthi leaders meeting with Hezbollah Secretary-General Hassan Nasrallah in Lebanon seem to confirm long-standing rumours regarding Hezbollah’s, and by extension Iran’s, involvement in the war in Yemen. The conflict between the internationally recognized Yemeni government and the Houthi rebels shows no signs of being re-solved anytime soon….But many observers believe that the Houthi/Hezbollah meeting makes the next UN-brokered negotiations less likely to yield a positive outcome.’

Hezbollah’s role would be as a backup for the Houthis against Saudi Arabia’s forces, but it is unclear to what extent the group is involved in the country, or whether this will increase.

It is also hard to see what is next for Hezbollah, either in Lebanon or the rest of the region, as the Syrian war grinds on. Even if it does end soon, Israel is still across the Lebanese border, gunning for a final showdown with its longtime enemy.

If that happens, it is difficult to know how Hezbollah will respond, although it might get more assistance from its allies, which it has loyally supported for years. 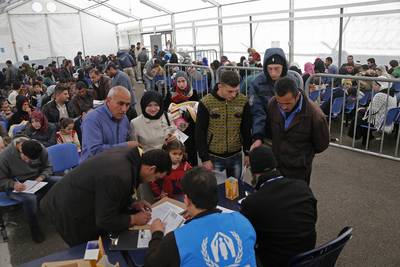 Lebanon and the war in Syria
Increasing sectarian conflict in Syria has affected Lebanon in several ways. Hundreds of thousands of Syrians have fled ...