Fanack Home / Lebanon / Past to Present / Not So Plural: How Sectarianism Has Failed the Lebanese

Not So Plural: How Sectarianism Has Failed the Lebanese

For the last two months, Lebanese have taken to the streets to protest against a collapsing economy and endemic corruption. In addition to socio-economic demands, many of the demonstrators also denounce the sectarian system that has been in place since the end of the civil war in 1990. They say it has allowed the political elite to develop parallel spheres of influence, spread clientelism in every area of society and steal billions in public funds, undermining the building of solid national institutions and effective public services.

Lebanon’s political model is founded on sectarian pluralism. The state recognizes 18 different religious communities: 12 Christian, five Muslim and one Jewish. The country is often described as a ‘consociational democracy’ as its political system is based on power-sharing according to the demographic weight of diverse communities. According to political scientist Arend Lijphart, a consociational democracy is ‘government by elite cartel designed to turn a democracy with a fragmented political culture into a stable democracy’. It may appear as a suitable model in divided societies where political parties represent political subcultures. In the case of Lebanon, these political subcultures are the different sects.

The sectarian system runs deep in Lebanon’s history, but it was enshrined after independence in 1943. Christians and Muslims established a national pact that would be the pillar of a new independent state. This pact relies on three principles: the independence of Lebanon from other Arab states and from the West, equality between all Lebanese and acknowledgement of the country’s Arab identity.

The pact is based on a double renunciation: Christians were to relinquish Western protection and accept Lebanon’s Arab identity; Muslims were to relinquish their integration into a greater Arab nation and fully accept the existence and legitimacy of the state of Lebanon.

This pact was also reinforced by an agreement on the distribution of the highest state’s functions on a sectarian basis. Christian Maronites constituted the majority of the population and were therefore given the presidency and all strategic functions in the army, police, economy, finance, judiciary and education.

The civil war between 1975 and 1990 highlighted the fragility of this compromise and the necessity to strengthen Lebanon’s national identity. The Taif Agreement was ratified by the parliament in November 1989 in order to end the conflict. It aimed at rectifying sectarian imbalances by establishing parity between Muslims and Christians in the parliament and reducing the functions of the president for greater collegiality. Since then, the cabinet has been headed by a Sunni who is nominated by the majority of an elected parliament and not by the president. It did not stop there. The agreement also envisioned, in the long run, the end of political sectarianism as a fundamental objective and called for the establishment of a state relying on ‘capability and specialization in public jobs, the judiciary, the military, security, public and joint institutions, and in the independent agencies excluding the top-level jobs and equivalent jobs which shall be shared equally by Christians and Muslims without allocating any particular job to any sect’.

In practice, this did not happen. Indeed, the post-war period has seen the exacerbation of sectarian antagonisms. The religious community became the ultimate refuge in a context of economic uncertainty and state dislocation.

While one of the arguments put forward in favour of consociationalism is its capacity to guarantee peace and stability in fragmented contexts, the Lebanese case highlights its limits. Sectarian power-sharing undermines citizenship and relegates people to their sect. In Lebanon, the system not only applies to politics but also to civil matters. If it can be perceived as protective of communities’ rights, the latter are being developed to the detriment of individual rights, as highlighted by the personal status legislation that imposes 15 different laws on citizens, based on their sectarian affiliation. It thus questions the principle of equality before the law and overwhelmingly discriminates against women.

Sectarianism also hampers cohabitation between different religious groups as demography becomes the major political weapon to claim power. In the 1970s, the regime was increasingly criticized by Muslims as it gave more prerogatives to Christians despite their demographic decline. In addition, it made – and continues to make – the country extremely vulnerable to regional conflicts and the exploitation of communities by external powers.

According to protesters, the current system grants jobs on the basis of sectarian affiliations and personal connections, rather than individual merit and competencies. The uprising has brought to the fore the aspirations of a young generation that has not lived through civil war. Many of them express anger towards a system that justifies corruption and clientelism on the pretext of protecting communities from each other.

They say it is time to prioritize national belonging over sectarian affiliations. Yet a regime that has been in place for decades cannot fall overnight. Mainstream political parties seem to be aware of this and are trying to recreate the polarization that followed the withdrawal of Syrian troops in 2005, coalescing around the 8 March or pro-Syrian regime alliance (gathering the Shia movements Amal and Hezbollah along with the Christian Free Patriotic Movement) and the 14 March or anti-Syrian regime alliance (notably the Sunni leader Saad al-Hariri’s Future Movement, the Christian Lebanese Forces and the Kataeb party).

Two of the three major Lebanese communities have gone through a period of ‘‘rise and fall’. Political Maronitism characterized the decades from independence to the eve of the civil war. Political Sunnism dominated from the end of the war to the assassination of former Prime Minister Rafiq Hariri in 2005. As of today, Hezbollah is the most powerful group in the country. However, its hegemony is being challenged in the streets, as protesters, including Shias, call for an end to a system that the group actively backs.

While the 14 March Christian parties have expressed their support for the protest, raising fears among many protesters of possible co-optation, Hezbollah has cast doubt on the popular movement’s integrity since the beginning, suggesting it is the result of a conspiracy hatched by foreign powers. It has, however, also displayed support for the protesters’ social demands in an attempt to appear as being on their side. In a speech on 11 November, Hezbollah’s leader Hassan Nasrallah went so far as to urge the judiciary to be “brave” and prosecute corrupt officials, starting with those affiliated with his movement. 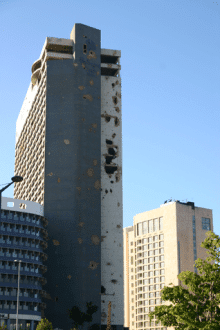 ANWAR AMRO ©AFP
ANWAR AMRO ©AFP
"Ignorance leads to fear, fear leads to hatred, and hatred leads to violence.
This is the equation."
IBN RUSHD/AVERROES (1126 – 1198)
We are a Dutch not for profit organisation (NGO), financed solely by individuals who share our belief in the importance of publishing and disseminating reliable, unbiased information on the Middle East & North Africa region. To represent the voice of the region’s people, we carefully echo the region’s heartbeat by offering fact-checked and therefore credible information.
Your support is greatly appreciated and helpful!
Donate