Negotiations Over Israel-Lebanon Maritime Dispute Expected to Start in July

Negotiations between Israel and Lebanon are expected to start in July 2019 over 860 km2 of disputed maritime waters off the Mediterranean coast. The dispute has been growing increasingly hostile since 2009, following the discovery of oil and gas reserves in the Levant Basin that could generate up to $600 billion over the next few decades.

However, the start of the dispute goes back even further, to 2007, when Lebanon and Cyprus signed a maritime border agreement marking a series of points at equal distance from both countries. However, the agreement was never ratified by the Lebanese parliament and did not enter into force because of Turkish resistance to all maritime border agreements signed by Cyprus. Then, in April 2009, a Lebanese commission was established to define and finalize the coordinates of Lebanon’s exclusive economic zone (EEZ).

After being approved by both the cabinet in 2009 and the parliament in 2011, Lebanon submitted the coordinates to the United Nations. This move was obstructed by the maritime border agreement signed between Cyprus and Israel in December 2010 and denounced by Lebanon as impinging on its EEZ.

The United States (US) has been mediating between Israel and Lebanon since 2011, but the recent progress is being attributed to the  shuttle diplomacy of David Satterfield, US undersecretary for the Near East.

The negotiations come at a highly sensitive time in the region, with Iran and the US facing off in the Gulf and escalating tensions between Israel and Lebanon’s Iran-backed armed group and political party Hezbollah. On 19 June, Israel organized its largest military drill in years, with thousands of army, navy and air force troops simulating a potential conflict with Hezbollah.

A month earlier, Hezbollah leader Hassan Nasrallah warned that if Israel obstructed Lebanon’s exploitation of its own resources, Hezbollah would confront it. In February 2018, he also warned of US “devils” and insisted that the US could not be considered as an “honest mediator”.

Given Hezbollah’s influence in Lebanon’s government – it has access to key ministries – the country’s leadership would not have agreed to negotiate with Israel without the party’s approval. One may therefore ask why Hezbollah decided to accept the talks.

In a policy analysis for the Washington Institute, Hanin Ghaddar outlines three factors. First, if the negotiations are successful, they would relieve Lebanon’s economic pressure, an outcome Hezbollah cannot ignore since, as part of the government, it can now be held responsible by the electorate for the country’s deep economic crisis. Second, Hezbollah is facing its own financial crisis in the wake of US sanctions against its Iranian patron and cannot afford a major conflict with Israel. Finally, Ghaddar’s analysis insists on Hezbollah’s unwillingness to be perceived in the international arena as the party that would stand in the way of a possibly lucrative deal, especially because Lebanon already granted contracts to a consortium of French, Italian and Russian companies in April 2018 to start exploratory drilling of two blocks, including block 9, which is located in the disputed area.

Hezbollah may also be reassured by the fact that Nabih Berri, parliamentary speaker and head of the pro-Hezbollah Amal movement, will be leading the talks for Lebanon. In a speech delivered on 31 May, Nasrallah said, “We stand behind the state and we trust the officials tackling this issue [border dispute] and we do not interfere.”

Lebanon has agreed to negotiate with Israel provided three conditions are met. First, the discussions must be held under the watch of the United Nations Interim Force in Lebanon (UNIFIL), in its headquarters in Naqoura, South Lebanon.

Israel has long been critical of UNIFIL’s role in Lebanon but agreed to this condition provided that the US, its main international ally, is also involved. Following Lebanon’s demands, the US will act as a facilitator rather than a mediator.

Second, maritime and land borders must be discussed together. Lebanese President Michel Aoun and Prime Minister Saad Hariri were happy to restrict the negotiations to the maritime border and focus on enabling the exploitation of the country’s resources. However, Berri pushed for simultaneous discussions, arguing that if a maritime border deal is reached with Israel, the latter may neglect negotiations over the land border.

The land dispute concerns a small area known as Shebaa Farms on the border between Israel, Lebanon and Syria. Both Syria and Lebanon claim sovereignty over the area, which is occupied by Israel.

Israel has accepted Lebanon’s conditions, but the land border negotiations may be a facade. In an interview with al-Jazeera, Makram Rabah, a professor at the American University of Beirut, said, “The Lebanese government is just saying they will talk about the land dispute, but that is impossible without the Syrians. The Foreign Ministry has added it in the statement as a face-saving measure for Amal and Hezbollah.”

Finally, while Israel was originally willing to fix a six-month period to reach an agreement, Lebanon has pushed for open-ended negotiations.

Israel started gas exploration in the Mediterranean 20 years ago. According to an analysis by Orna Mizrahi and Oded Eran for Israel’s Institute for National Security Studies, over two thirds of the electricity produced in Israel comes from natural gas. Hence, a solution to the dispute with Lebanon is unlikely to change Israel’s natural gas supply. The existing amount is sufficient to meet domestic needs as well as gas supply contracts with the Palestinian Authority, Jordan and Egypt.

The Middle East Eye reported informed political sources as saying that Israel’s apparent flexibility should be read in the broader context of Washington’s so-called ‘deal of the century’ supposedly aimed at settling the conflict between Israel and most Arab countries.

Mizrahi and Eran argue that if Lebanon and Israel reach an agreement regarding their borders, gas drilling would potentially create common economic interests between both nations, even though they have been at war since 1948 and have not cultivated any diplomatic ties.

According to the  Middle East Eye, the new economic situation that would stem from gas drilling may impact negatively on the perception of Hezbollah’s military arsenal in Lebanon and beyond, with louder voices calling for the development of a defence strategy that would integrate the party’s arsenal in a legal structure dependent on the Lebanese state. 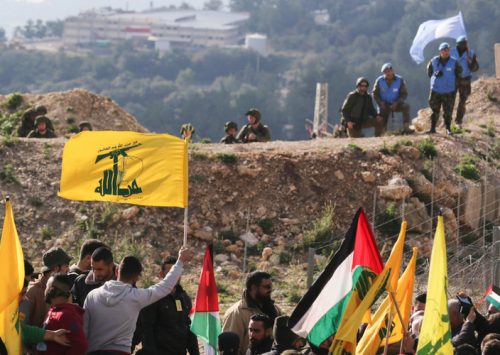