In 1989, general Michel Aoun asked the League of Arab Nations to mediate. Aoun wanted all foreign troops to leave Lebanon – the Syrians, the Palestinians as well as the Israelis, against whom he waged war, first as Commander of the Armed Forces, later – after his dismissal in 1989 – with his own army, which was for a large part made up of the regular army. He opposed the negotiations in Taif (Saudi Arabia), which had been set up by a committee led by King Hussein of Jordan, King Faysal of Saudi Arabia and President Chadli Bendjedid of Algeria.

Nevertheless, on 22 October 1989 the Taif Agreement was signed and on 4 November ratified by the Lebanese Parliament gathered in Taif. The parliamentarians also elected a new president, René Moawad. When he was murdered shortly afterwards, a new president was elected, Elias Hrawi. He appointed Salim al-Hoss (again) as Prime Minister, as had his predecessor Moawad.

The Taif Agreement codified the way the different religious communities should govern together, in order to lead and maintain a peaceful co-existence. It echoed the 1926 Constitution stipulation about the composition of Parliament and the formation of the government, and as such referred to the 1943 National Pact, also based on the political recognition of the religious communities. However, like the earlier Constitution, the Agreement also stipulated that Lebanon should take measures to eventually abandon this community-based system altogether. Furthermore, it demanded of all warring factions to disarm. But it also stated that the Syrian army should remain in the Beqaa Valley and insisted on the privileged bonds between the two countries.

The Taif Agreement also changed the key of distributing seats in Parliament, and redistributed powers between the President, the Speaker of Parliament, and the Prime Minister.

End of the Civil War

However, this last clause was inacceptable to Aoun and so the war did not end immediately. It was – as some historians stress – the Gulf War of 1990-1991, in which the United States, its Western allies, and all Middle Eastern states were – in one way or another – implicated, that actually put an end to Lebanon’s Civil War. In this view, Syria’s dominance over Lebanon, as laid down in the Taif Agreement, is said to be a ‘reward’ for its support of the United States in the Gulf War.

The final vestiges of the Civil War were extinguished a year after the Taif Agreement, on 13 October 1990, when Syrian troops launched a ground and air attack against general Aoun – who still did not recognize the Agreement and thus was the last to continue fighting – and forced him to seek refuge in the French embassy. In this last stage, Aoun was backed by Iraq, the PLO and, more discreetly, France, which eventually offered him political asylum.

When the Civil War eventually ended, over 100,000 persons had been killed, and nearly a million displaced. The damage to property and infrastructure amounted to several billion dollars. All communities suffered severe losses. The Shiites were perhaps the only ones to eventually emerge stronger from this long conflict, although the latter stages of the war had been marked by fierce rivalry and, as a consequence, heavy fighting between Amal and Hezbollah. Hezbollah, which emerged as the stronger party, gained much support from within the Shia community, which until then had been among the poorest of the country, by organizing a system of social security but also by giving the Shia a sense of pride in continuing its resistance against the Israeli occupying forces in South Lebanon. 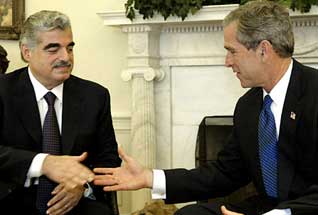 Reconstruction and reconciliation (1990 – 2005)
However successful in the political and diplomatic field, the economy was in a dire state, with wages plummeting, prompt...