Throughout 1975, the fighting, though violent, remained largely contained to clashes between the (Maronite) Phalange and Palestinian groups and their allies (the Druze, at that stage). From the beginning of 1976, the violence escalated into an actual civil war. In February, the mainly Christian population of the coastal town of Damour was massacred by Palestinians – in retaliation for a massacre, a few days earlier, in the mainly Muslim area of Beirut suburb Karantina, perpetrated by the militia of the Phalange. Damour marked the beginning of a change in the power balance between the Palestinians and the Maronites, to the clear advantage of the former.

Syrian President Hafiz al-Assad feared a victory of  the Left, as this would lead to direct Israeli involvement in the Civil War. On the invitation of the Lebanese President, who belonged to ‘the Right’, and with the approval of the United States and the League of Arab Nations, Syrian troops entered Lebanon in the spring of 1976. By doing so Damascus allowed the Maronites to regain strength. In the end it would lead to a showdown with Yasser Arafat’s PLO – which the latter lost.

In the south of Lebanon a so-called Red Line was drawn as a boundary between Israeli and Syrian spheres of influence, thus confirming the status quo. This Red Line more or less coincided with the river Litani, that neither forces were allowed to cross. In May 1976, a new president was elected, Elias Sarkis, under highly controversial circumstances. Sarkis was said to be pro-Syrian, although he eventually sided with the Phalange and Israel. In October 1976, a summit was held in Riyadh (Saudi Arabia), where a ceasefire was signed. However, the militias refused to disarm and the violence continued. 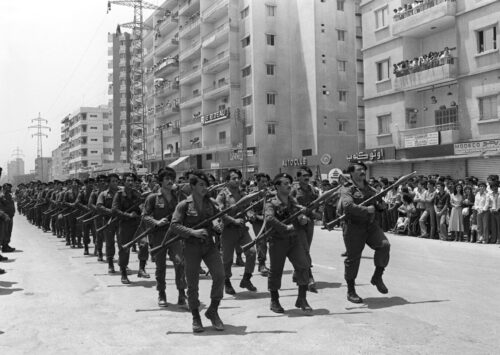